But it's not because he looks like a thumb with a beard. 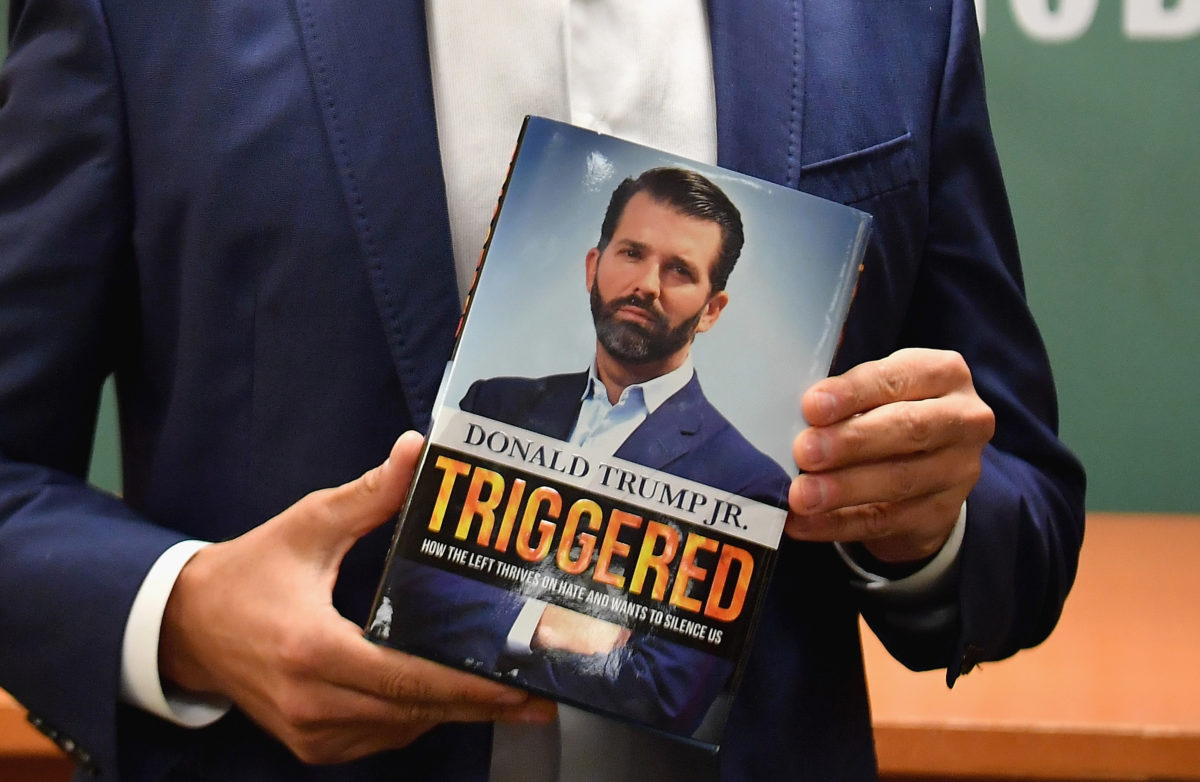 Your feel good news of the day! Donald Trump Jr just had a disastrous appearance at UCLA this weekend while attempting to promote his new book “Triggered.” While he was hoping to prove that his book was correct – it claims that the American left is full of hate, vitriol, and is bent on silencing anyone who supports the Trump presidency – it was in fact his own target audience, young conservatives, that turned on him according to a report by The Guardian.

The audience was angry that Don Jr and his girlfriend Kimberly Guilfoyle would not take audience questions during their two-hour talk. Diehard MAGA bros raised their voices and unleashed a wave of heckling that drowned out Don-Don and Kimber barely 20 minutes into the event. What first started out as loud shouts of “USA! USA!” quickly turned into openly hostile screams of “Q&A! Q&A!” after it was announced that the almost 500 person audience would not be allowed to ask questions due to time constraints. Oh how quickly they turn on you, Don Jr!

The discontent originated with a fringe group of young conservative extremists (read: white nationalists) who call themselves “America Firsters.” They believe that the Trump administration has been taken over by a “cabal” of internationalists, free-traders, and apologists for mass immigration. Basically, they think Trump isn’t racist…. Enough! Truly wild.

At first Don Jr attempted to argue that he wasn’t taking questions because he didn’t want to “risked creating soundbites that leftwing social media posters would abuse and distort.” But of course no one bought that. Within minutes his entire argument that he was willing to have dialogue but the left refuses to tolerate free speech disintegrated back into the bull shit from which it was shaped.

At this point Guilfoyle stepped in to try and defend her man. She tried to shame them with thoughts of “not making their parents proud” (hahaha) and then threw out lame insults about how they “probably have to do internet dating” because no one would want to interact with them in person (HAHAHAHA).

Shortly after, they both left the stage.

Now before we revel too much in the shame and humiliation of Don Jr, it’s important to note that this hilarious disaster was sparked by a group of racist extremists. While Trump Jr’s tour was sponsored by Turning Point USA, a campus based conservative group that brings right wing speakers to liberal universities, there is a growing group of “zoomers” (Or Gen Z) at UCLA that want to slam the door on all immigration, not just those who cross undocumented. Basically, the white supremacist/neo-nazi/alt-righters.

They believe that the Trump administration, and the GOP as a whole, has been infected with “fake conservatism” and that Trump himself is “at the mercy of a cabal of deep state operatives who wouldn’t let him do many of the things he campaigned on,” according to two of the hecklers that spoke with The Guardian after the event.

And while it might be fun and cathartic to laugh at Don Jr being heckled by his family’s own supporters, lets not forget that the hecklers weren’t moderate conservatives that are critical of the Trump administration and his antics (aka the “Never Trumpers”) but were alt-right, Richard Spencer loving, extremists who want Trump to be even more terrible than he already is.