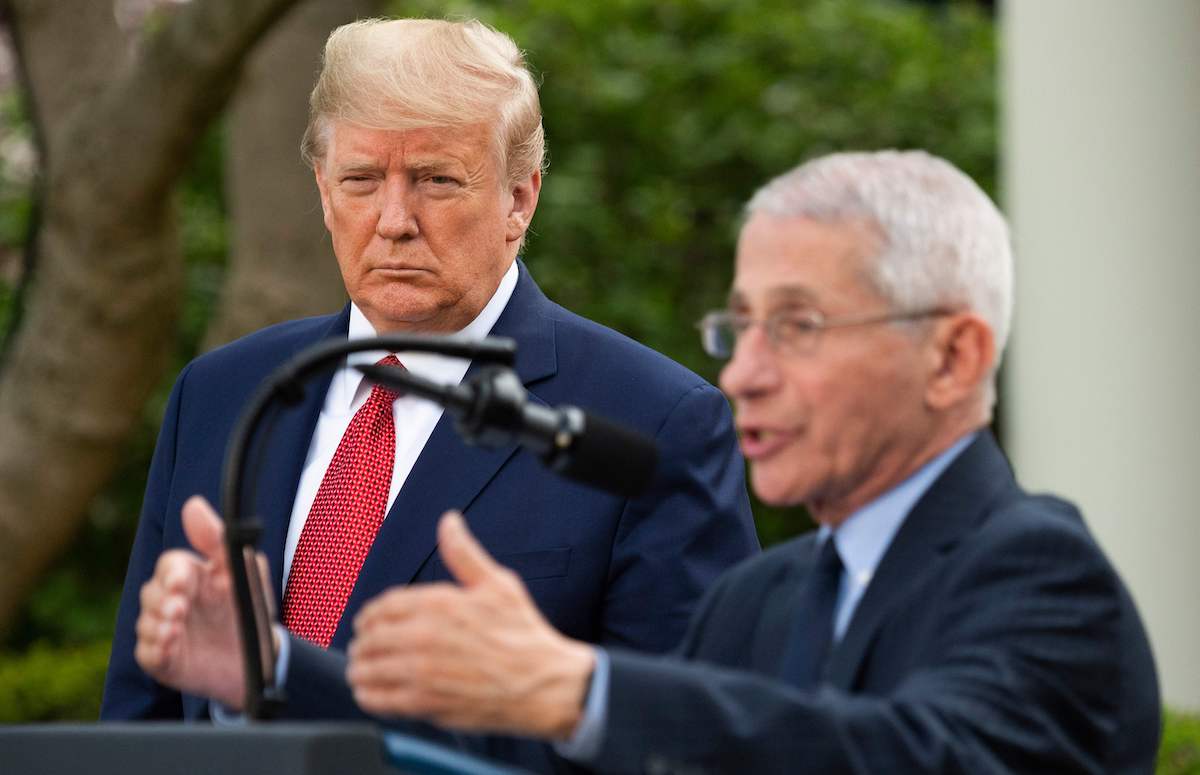 Despite not having any medical qualifications whatsoever, Donald Trump continues to ignore medical experts and push hydroxychloroquine as a potential treatment for the COVID-19 coronavirus. At his press briefing Sunday, he said the U.S. has stockpiled millions of doses of the drug, despite experts’ assertions that there is not strong enough evidence to warrant Trump’s level of confidence in the possible treatment.

The disagreement over the drug is reportedly causing massive conflict among White House personnel. According to a report from Axios, an “epic Situation Room showdown” broke out Saturday when Trump’s economic advisor Peter Navarro declared the drug to have shown “clear therapeutic efficacy” in fighting the coronavirus.

Anthony Fauci, the infectious disease expert on Trump’s coronavirus task force reportedly pushed back, saying there was only anecdotal evidence at this point. That, according to one of the report’s sources, “just set Peter off,” forcing everyone, including Mike Pence and Jared Kushner to try to calm him down while Fauci just “looked confused.”

By the way, if you’re wondering whether Navarro is a reliable source here (despite not being a medical doctor), keep in mind that this is a guy who created an alter ego with an anagram of his name to serve as an “expert” to cite in his own books.

Navarro made an anogram of his name (Ron Varra) and turned that into a fake expert he quoted in books https://t.co/ZCx0hBBXLF https://t.co/q7mE3vNHwc

It’s clear which side Trump–a man who also reportedly created an alter ego in order to boost his profile!–has taken in this feud of facts vs. not facts. During his daily briefing Sunday, he refused to let Dr. Fauci answer a question about the efficacy of hydroxychloroquine.

“I answered this 15 times. You don’t have to answer.” — Trump prevents Dr Fauci from answering a question about hydroxychloroquine pic.twitter.com/8R1K1hDsaX

Toward the end, a CNN reporter turned to Anthony S. Fauci, director of the National Institute of Allergy and Infectious Diseases, for his opinion on the effectiveness of hydroxychloroquine with a sharper question: “What is the medical evidence?”

Standing at the microphone, Fauci opened his mouth — but before he could speak, the answer came out of Trump’s instead.

“Do you know how many times he’s answered that question?” Trump cut in. “Maybe 15.”

A tight smile stretched across Fauci’s face. His eyes, framed by a pair of wire-rimmed glasses, flicked quickly to Trump. He glanced back at the reporter, who was saying to the president, “The question is for the doctor. … He’s your medical expert, correct?”

Fauci’s smile, for just a moment, was all teeth now. Trump raised his finger sternly, telling the journalist, “You don’t have to ask the question,” and so Fauci didn’t answer it, and the news conference shuffled right along.

Hopefully, hydroxychloroquine or another drug currently being tested ends up being an effective treatment. In the meantime, it’s dangerous for Trump to be pushing this drug (when people who need it for other conditions like lupus are finding it in short supply) and it’s straight-up ridiculous for someone like Peter Navarro to insist he’s at all qualified to offer a “second opinion” after Fauci disagreed with him.

Some are even arguing that what these two men are doing is essentially practicing medicine without a license, which might sound dramatic, but not necessarily wrong.

I can’t take it anymore. I’ve been to The Hague. I’m making a referral for crimes against humanity tomorrow. Today’s press conference was the last straw. I know the need for a prosecution referral when I see one. https://t.co/XQin24gqY4