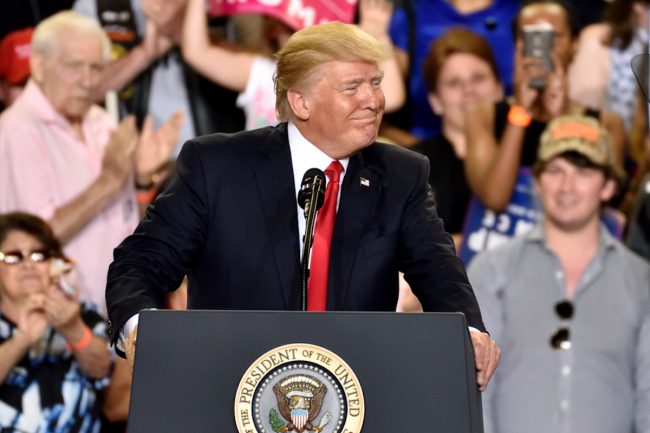 How many times can the president of the United States get on television and, in his rambling “defense,” explain the exact reason that what he did was a crime? We’ve seen it before, most prominently, when he flat out stated, in an interview on NBC, that he had “this Russia thing” in mind, and the idea that it was “a made up story,” when he decided to fire FBI director James Comey. Well …

After Donald Trump’s former “lawyer,” Michael Cohen, pleaded guilty to crimes including intentionally hiding a campaign contribution with the intent to influence the election, Trump sprang into action in his usual style—that is, saying a bunch of words that can only be construed as a defense if all facts and logic are ignored. He took to his favorite show, Fox and Friends, to explain himself, and once again laid out the exact problem with his actions.

In the case of Cohen, the very reason that he’s in trouble is that the money paid to silence the women Trump had affairs with, while very much a campaign expense, was deliberately kept separate from campaign funds in order to keep the whole thing secret—in other words, there was criminal intent to hide a campaign donation for the purpose of influencing the election.

Enter Donald Trump, using the very same quick thinking that he also asserted the country couldn’t possibly survive without, to explain that this couldn’t have been a campaign finance violation because the money didn’t even come from the campaign! (Really.) Check and mate, deep state! Truly, we are dealing with quite the intellect here.

can’t have a prolonged multi day controversy about whether or not you violated federal election law if you cop to it on air pic.twitter.com/IlnpB2HLMl

This isn’t quite as boneheaded as his Comey/Russia admission, since this time we have hard facts that already show what he just admitted to, but it’s still somehow a breathtaking display of either his absolute lack of understanding of why such a thing is a crime, or his confidence that if his argument sounds true enough to anyone who doesn’t actually grasp what’s going on—an admittedly large number of people—everything will work out fine.

And the scary thing is that, so far, that’s been effective for him.

The interview was full of other little gems, though, like how he also claimed that he only knew about the payments after the fact, which is just a flat out verifiable lie. Much has been made over whether we have Trump on tape telling Cohen that he should or shouldn’t make one of the payments in cash, but he’s very much on tape discussing the payment, and he’s still trying to cover it up.

Unfortunately, that has also never seemed to matter.

He also complained again that Attorney General Jeff Sessions recused himself from the Russia investigation—a.k.a. the only decent thing Sessions has ever done—and mentioned that he only gave Sessions that job due to loyalty on the campaign trail. He openly wondered how someone who’s doing a “good job” could be impeached. The whole thing was just such an absurd repetition of everything wrong with Donald Trump that, honestly, we’re running out of things to say about it.

Trump hasn’t been indicted for this verifiable crime because, as a sitting president, he can’t be. If only there were some official government body with the authority to hold him accountable—some group able to put a check on him to balance his power …