Donald Trump: “Corruption!!!” to Turn Away His Unauthorized “Army” of “Poll Watchers” 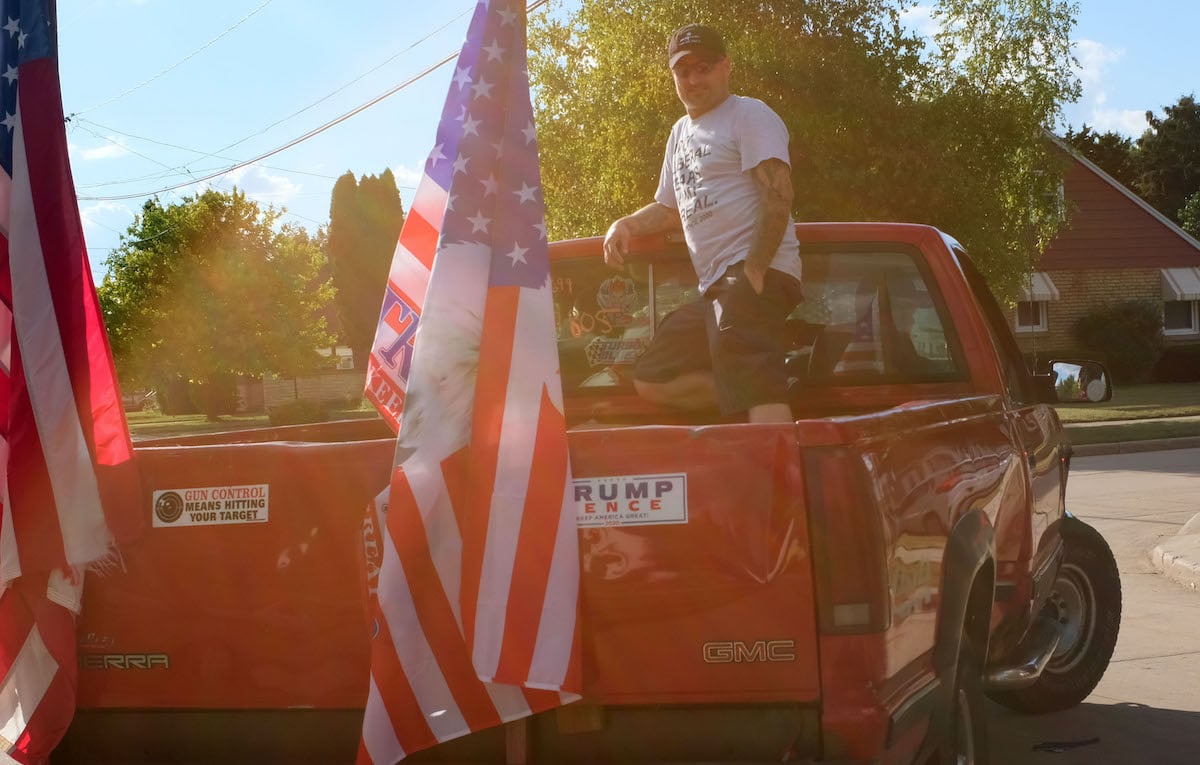 A Donald Trump supporter is seen during a Black Lives Matter protest on August 17, 2020 in Oshkosh, Wisconsin.

Unsurprisingly, Donald Trump ended the first presidential debate between himself and Joe Biden by pushing yet another election conspiracy theory. Earlier in the day, he had tweeted about “poll watchers” being turned away in Philadelphia during Pennsylvania’s first day of early voting.

Wow. Won’t let Poll Watchers & Security into Philadelphia Voting Places. There is only one reason why. Corruption!!! Must have a fair Election.

Trump’s campaign has launched a “grassroots operation” looking to recruit an “army of supporters” to work as “poll watchers,” as he continues to make baseless claims that Democrats are trying to steal the election. Trump has been using this kind of militarized language for a while now, and even launched the website armyfortrump.com earlier this year but appears to have only recently made the decision to use that “army” at the polls. Previously, it seems to have just been a slogan to sell camo hats and make email list subscribers feel like “PATRIOTS.” (Capitalization theirs, obviously.)

On the Army for Trump website, you can sign up for a number of volunteer efforts, including joining the “election day team.” This team “will assist Team Trump and grassroots operations across the country on Election Day 2020. Our Election Day Team primarily focuses on Getting Out the Vote (GOTV) to ensure any voters who did not vote early vote on election day. Depending on the state, volunteers may be involved in other Election Day activities such as precinct coverage.”

Trump is recruiting people to be poll watchers, which is a thing both parties do to track voters who still haven’t cast ballots and to make sure only those who are eligible to vote do. But poll watching also comes with a long, ugly history of voter suppression and intimidation—something that Trump’s hyper-military language clearly evokes.

There are also rules in most places to prevent randos from showing up and dubbing themselves poll watchers without any training or authorization. So, in the at least one and possibly only case I could find of a Trump “poll watcher” actually being turned away on Tuesday, it doesn’t sound like she had either of those things.

About 1 p.m. Tuesday, a woman approached the supervisor at the entrance of the satellite office at Overbrook Elementary School. She said she was there to monitor “the integrity of the election” and asked to be allowed inside. The supervisor told her she was not allowed inside the building unless she was using the office’s services.

The woman did not present any sort of certificate of being an official poll watcher, but calmly stated that she had a right to be inside.

The woman told The Inquirer she was “hired by the Trump campaign to oversee the integrity of the election.” She said she was paid to monitor the West Philadelphia site. She would not provide her name or any further information, and she left the area shortly afterward.

Another really important element of this story, which Trump has used as proof of “Corruption!!!” is that this woman was not actually at an official polling place. As that article says, this woman was turned away from an early voting satellite office, which has very different rules regarding who can come in and watch their operations—especially during a pandemic, when businesses and government offices (which these satellite locations essentially are) are limiting crowd sizes.

A Philadelphia deputy commissioner told NBC News in a statement:

The Satellite Offices are not Polling Places. Poll watcher certificates have not been issued for any individuals for anything other than poll watching activities on Election Day at Polling Places.

Individuals who are not seeking to receive services from a Satellite Office are not permitted to be there for other purposes. This is particularly important in the current environment as City buildings and offices remain closed to the public due to COVID-19.

And yet, Trump is spreading a conspiracy theory about legitimate poll watchers (which they’re not) being turned away from polling places (which aren’t open yet).

Trump: I’m urging my supporters to go in to the polls and watch very carefully, because that’s what has to happen. I am urging them to do it. As you know, today there was a big problem. In Philadelphia, they went in to watch. They’re called poll watchers, a very safe, very nice thing. They were thrown out. They weren’t allowed to watch. You know why? Because bad things happen in Philadelphia. Bad things. And I am urging my people. I hope it’s going to be a fair election. If it’s a fair election-

Chris Wallace: You’re urging them what?

Trump: … I am 100% on board. But if I see tens of thousands of ballots being manipulated, I can’t go along with that. And I’ll tell you why-

Wallace: What does that mean, not go along-

Trump: … from a common sense-

Wallace: Does that mean you’re going to tell your people-

Trump: I’ll tell you what it means-

Wallace: … to take to the streets?

Trump: It means you have a fraudulent election. You’re sending out 80 million ballots-

Wallace: And what would you do about that?

So Trump is recruiting an “army” and “urging” them to act in an unspecified but urgent way against a party and its people who Trump has been insisting are their enemies, actively working against them and their country.