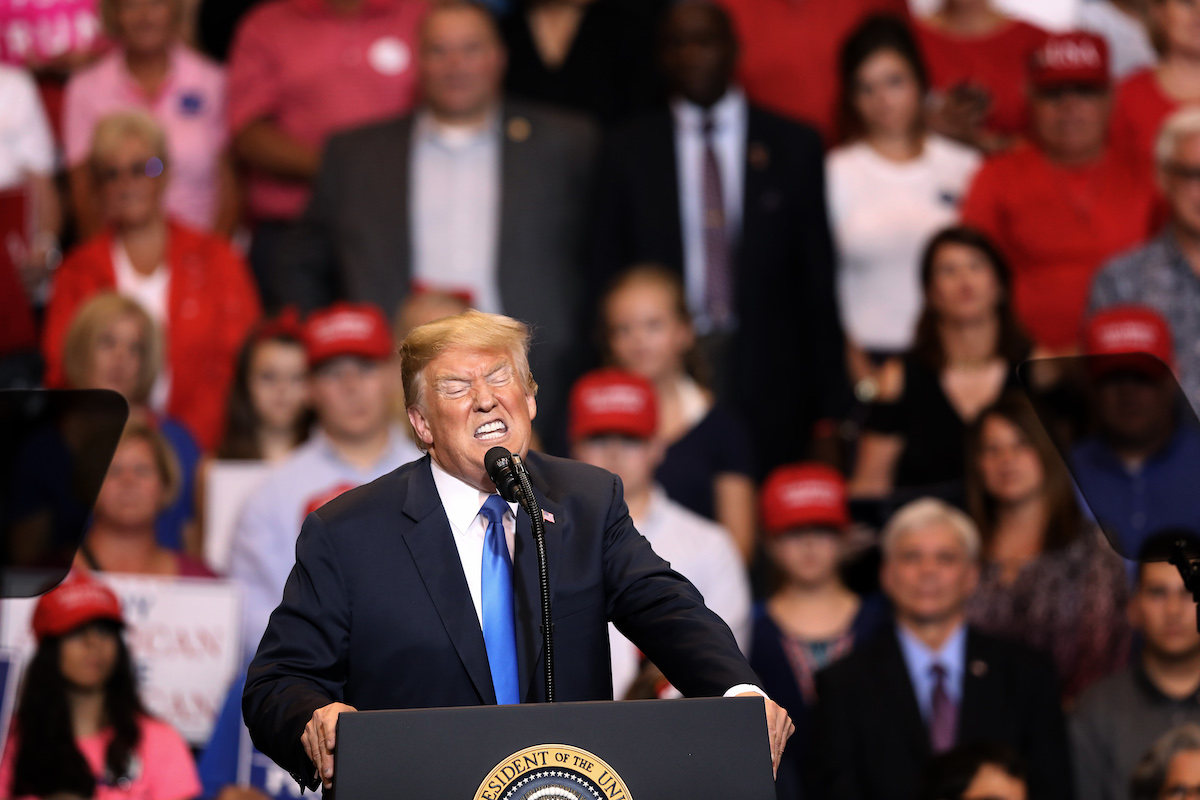 Donald Trump spoke to a group of natural gas workers in Connecticut Tuesday and during his speech, he hit on a number of his Top Hits. He talked about his high ratings (choosing this time to focus on election night 2016, rather than his go-to lie about record-breaking inauguration numbers), he threw a racist slur at Elizabeth Warren, and he demonstrated a fundamental misunderstanding of how renewable energy sources work.

Trump on wind energy: “When the wind doesn’t blow you don’t watch television that night. Your wife says, ‘what the hell did you get me into with this Green New Deal, Charlie?'”

Trump’s understanding of wind-based energy boils down to “When the wind doesn’t blow you don’t watch television that night” and your wife (because his default imaginary audience is always a heterosexual man) is going to be mad at you for that.

This isn’t the first time he’s painted this particular weird picture. At a rally in March, he gave us a similar scenario, but with more sound effects:

TRUMP: “If Hillary got in… you’d be doing wind. Windmills. Weeeee. And if it doesn’t blow, you can forget about television for that night. ‘Darling, I want to watch television.’ ‘I’m sorry! The wind isn’t blowing.’ I know a lot about wind.” pic.twitter.com/tGsUIoUmUQ

He started by calling the Green New Deal “a hoax like the hoax I just went through,” presumably meaning the Mueller investigation and ongoing congressional battle.

Proponents of the Green New Deal, he says, “don’t know what they like,” but they do like wind, “even though it kills all the birds.”

“You want to see a bird cemetery, go under a windmill sometime,” he says to extremely spotty laughter and applause. Killing a bald eagle in California is punishable with five years in prison, he says (and while the actual sentence is two years, that’s the least of our concerns regarding his misstatements here). But “you go under a windmill, you see ’em all over the place.”

Trump’s goal here, obviously, is to paint wind energy as not just ineffective, but unpatriotic. In reality, it’s neither of those things. And it’s hard to believe Trump doesn’t know that. But he sure knows how to placate his base. A lot of people here really should be insulted by the fact that Trump thinks they’re misinformed enough to eat this stuff up.

In case you’re wondering, wind turbines do kill birds–about 214,000 to 368,000 annually. Does that sound like a lot? For some perspective, about 6.8 million birds die every year from collisions with cell and radio towers, but Trump’s not coming after Verizon. And about 1.4 to 3.7 billion birds are killed every year by cats, and while we know he’s not a pet person, he’s not going to get as much mileage here out of coming after our kitties. So for now, he’s sticking with the wind turbines kill eagles and make your wife mad at you line of reasoning.