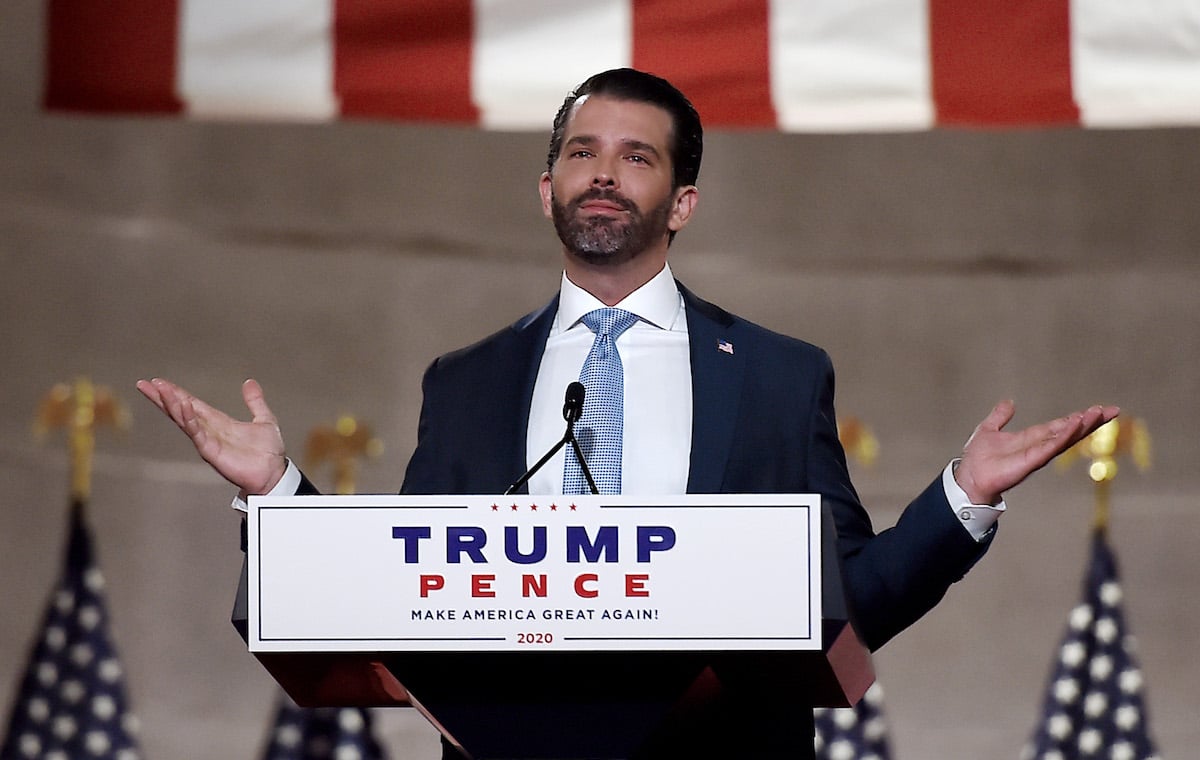 During an interview on Extra, when asked why his daddy hasn’t condemned Rittenhouse’s actions, Trump Jr said, “We’re waiting for due process. We’re not jumping to a conclusion.”

“If I put myself in Kyle Rittenhouse[‘s shoes], maybe I shouldn’t have been there,” he continued. “He’s a young kid. I don’t want young kids running around the streets with AR-15s. … Maybe I wouldn’t have put myself in that situation—who knows? We all do stupid things at 17.”

Of course, Trump, like his father, has had no interest in “due process” when condemning Black Lives Matter protesters. He has repeatedly decried all protesters as being “antifa” and he skipped the whole due process thing in decrying the shooting at the pro-Trump counterprotest in Portland, where, as he tweeted, “an innocent Trump supporter [was] killed by a leftwing anarchist.”

As for dismissing multiple murders as the kind of “stupid thing” all teenagers do, I don’t know who would think, let alone say that kind of thing unless they themselves spent their teenage years doing some murders. Not that I’m saying Don Jr. did that–I would never say such a thing without first letting “due process play out,” obviously. It’s just curious.

When I was 17 and stupid I borrowed my friend’s shirt and burned a cigarette hole in it. Didn’t shoot a single person. https://t.co/9oDOeQCOUB

When I was 17, I snuck out of my house by climbing out a window so I could go to a Harry Connick Jr. concert. (I know! SO METAL.)

But I never killed two people.

when i was 17 i was in my first year of college and honestly i didnt take things seriously enough and i made a lot of bad academic choices, but i definitely never shot and killed anybody. https://t.co/6LESPJxjJE

When I was 17, my friends and I used to sneak on to golf courses in the middle of the night and steal the golf flags, but we didn’t kill 2 people. https://t.co/wgWArVvPaa

Yea, when I was 17 I used to put jolly ranchers at the bottom of terrible malt liquor beverages I bought at the corner store with a fake ID and drink them in corn fields. I didn’t walk around with an AR-15 shooting unarmed people https://t.co/ppzWk9xzLm

I can tell you “we all” don’t murder multiple people. https://t.co/u6ZAANvw9K

Trump was on Extra to promote his new book, which has the absolutely incredible title, Liberal Privilege: Joe Biden and the Democrats Defense of the Indefensible. I haven’t read the book so I don’t know what he considers to be “liberal privilege” but it appears that conservative privilege is getting the president’s son to defend you on television after you cross state lines to murder people.

But maybe Don Jr. is contractually obligated to defend the indefensible during his book tour, who knows?

(via The Hill, image: OLIVIER DOULIERY/AFP via Getty Images)