For when you need a break from your Disney+ binge ... 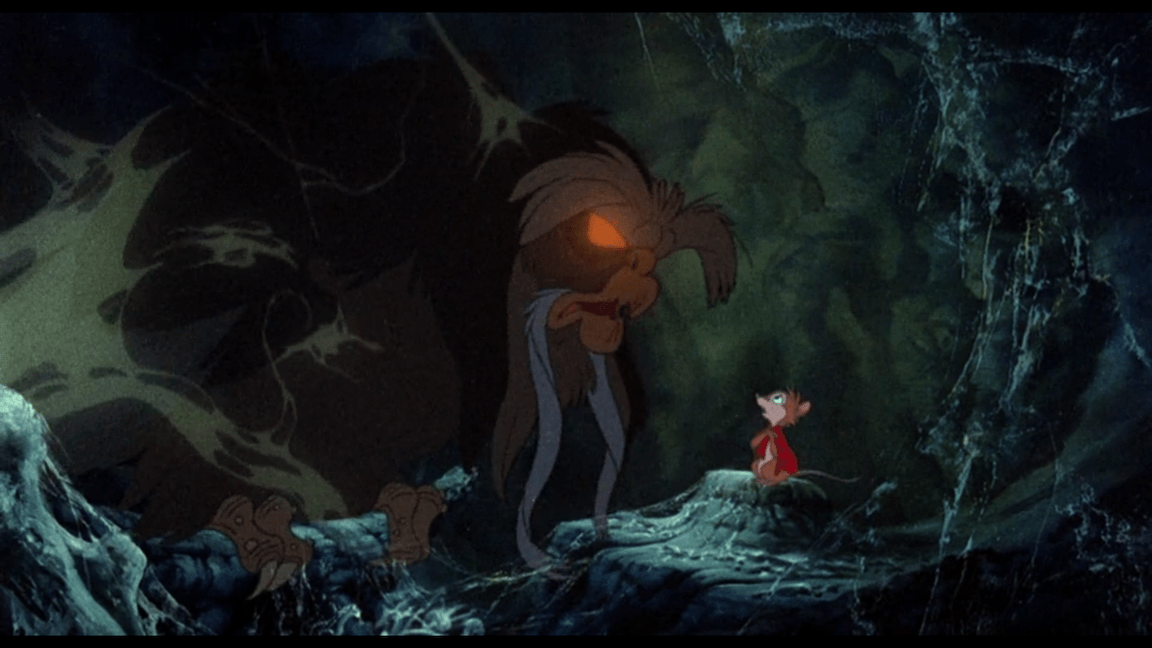 2020 is almost here! The end of the year (and this year in particular) always stirs up feelings of nostalgia as we look back to see what, if anything, we’ve accomplished in the last 365 days. The end of a decade only intensifies the urge, so let’s look ALL the way back to our collective millennial childhoods and examine the films that shaped us and made us into the cautious, terrified, dark-humored, yet loving adults we are today. No I’m not talking about Disney, I’m talking about the films of animation genius Don Bluth!

A master storyteller with a knack for capturing our attention and our nightmares, no one made a terrifying children’s flick like Bluth. So here is my ranking of Don Bluth classics ordered by how much they scarred me when I was young.

Coming in as the least traumatizing (which is saying something considering it has forced marriage to a mole king as a major plot point) is Thumbelina! Aside from Anastasia, this was the closest Bluth ever got to being interested in the Disney princess stories that dominated 90s family-oriented animation. The animation style is very family-friendly and the sinister fine lines and detail work that are trademark Bluth are largely absent.

Also released 1994, A Troll in Central Park sees a little more of Bluth’s exploration of the nasty and the gross. Gnorga might be a bit of an Ursula rip-off but she is still fabulous and leans in hard on embracing every wart and blemish she finds. On the whole though, despite being a film about literal trolls, ATICP is still one of the least terrifying movies Bluth created.

The last full-length animated feature that Bluth directed (though it’s rumored he is coming back to direct the Dragon’s Lair movie in 2020), Titan AE is an underrated sci-fi classic about life after earth. It ranks lower on the list because by 2000 I was firmly into my cynical teens so it didn’t quite traumatize me the way his older films did. However, watching this trailer I am definitely traumatized now by its use of the band Creed.

Now it’s time to start dipping into nightmare territory! Rock-a-Doodle tells the story of Chanticleer, a humble farm rooster that discovers fame and fortune in the big city but forgets his duty (of waking up the sun) to his friends and family back home. It also introduces us to one of my favorite creepy childhood villains, the Grand Duke Owl (voiced by Christopher Plummer.) These owls are clearly descendants of the truly horrifying owl from The Secret of NIMH – who you will meet near the end of this list.

What child doesn’t love to see a decomposing corpse do a full-on song and dance routine!? Rasputin’s jaw falls off, his eyes pop out, at one point in the film, Bartok literally falls inside his chest cavity. Which is why I would actually love to see a live-action film version and if Sony doesn’t give it to us they are cowards! Plus, I bet Christopher Lloyd would be down to reprise his role.

An American Tail is a heartwarming immigrant’s story until this utter abomination is released during the final battle between the mice and the cats. And it is released by the GOOD GUYS. Even rewatching this scene now as an adult I am truly shook that this was given to children to consume. Bluth has become death. And threw some shade at Disney (his former employer) and Mickey Mouse in the process.

Coming hot (get it? get it!?) at number 3 is All Dogs Go to Heaven for this scene where our protagonist Charlie literally dreams of HELL. There’s terrifying dog skeletons, there’s cat demons, there’s fire and lava and lightning and an adorable dog trying to escape it all. A true masterwork of horror by any genre standard.

Big Daddy Owl is here to haunt your dreams! The Secret of NIMH left an indelible mark upon me as a child. So much so, that later as a teenager left to babysit my much younger sister, I put on this movie thinking I would share with her one of my childhood classics. Unfortunately, I had forgotten how truly upsetting this scene is and I traumatized her so much that she ran crying and screaming from the room. Which is maybe for the best because Nicodemus describing the animal testing they endured is equally horrifying.

The top award for Bluth films that absolutely wrecked me however goes to The Land Before Time for a very special reason. It didn’t just scar me visually, but EMOTIONALLY. Twice. First as a child, I was traumatized by Little Foot’s mother sacrificing her life to protect her child and his friends during the fight with the T-Rex/earthquake.

Second, as an adult when I made the mistake of watching it after drinking a whole bottle of wine and coming to the realization that the setting of the film is post-comet (the reason for the land dying and the earthquakes) and the impending multi-species extinction is a threat that looms over the entire film. A realization that gave me an existential crisis as I watched these poor dinos struggle to survive, knowing that ultimately they would all meet the same fate as Little Foot’s mother. There was a lot of adult me crying over a children’s cartoon that night. Learn from my mistake: wine and Don Bluth do not mix.