Why DC’s Dolphin Needs a Comeback 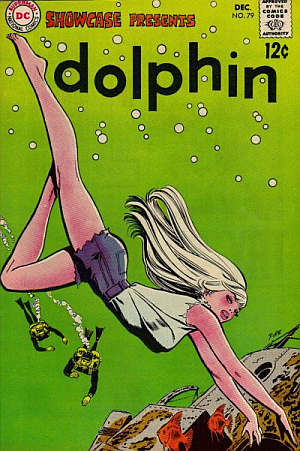 Dolphin needs her due!

Who’s Dolphin, you ask? No, it’s not just you. I hear the crickets as well.

Dolphin was created by Jay Scott Pike in 1968 for DC’s Showcase series. Showcase was a monthly comic that introduced new characters or told the origins of existing ones, usually as a springboard for a new series.

Dolphin’s early beginnings were not without its problems. She was introduced as a young girl who falls overboard a cruise ship, only to be abducted by aliens and experimented on. These experiments resulted in fantastic new abilities that included superhuman strength, ability to breathe underwater, slowed aging process, gills, webbed feet, and the ability to communicate with aquatic life. The experiments also gave Dophin her signature white hair.

After Dolphin escaped the alien ship, she was discovered by fisherman who nicknamed her “Dolphin.” Still, she spent most of her time alone in the ocean, and because of the lack of contact from humanity, was non-verbal until she was taught sign language. She eventually learned human speech, but preferred not to talk.

Dolphin then spent most of her time either chasing Aquaman or his sidekick, Tempest, or Garth. She was also a member of the Forgotten Warriors and then died in Blackest Night: Titans #3, in 2009.

That’s pretty much it.

Do you see the problem as well?

Dolphin was created in a time where female characters were usually relegated to girlfriend roles, and she had a lot of untapped potential.

It’s now 2015, and female superheroes and strong female characters are on the rise. Marvel has breathed new life into versions of Captain Marvel and Ms. Marvel as well as bringing back obscure characters such as Squirrel Girl, Moon Girl, and Hellcat. Or even creating new ones such as variants of Gwen Stacy; Spider Gwen, and Gwen Pool.

Look at the sales figures, according to an article by Susana Polo on Polygon:

Of Marvel’s top 10 best-selling comics in March, four of them featured a lead female character (three characters in total, as the first two issues of the company’s Princess Leia miniseries hit last month). But when digital retailer Comixology offered their audience the chance to get any two Marvel comics for the price of one, that ratio was flipped and then some. Three of the top 10 choices made in the sale were from Marvel’s nascent Star Wars line. The other seven were all female superheroes in the main Marvel continuity.

So if female superheroes are selling, why isn’t DC jumping into the ring with more female-led comics? The two comic titans both love competition and money. There is a famous anecdote that Stan Lee told once, where after a golf game with a former, DC Editor-in-Chief and hearing the sales numbers for Justice League of America, Lee immediately pitched Fantastic Four to Marvel.

DC has been slow to follow Marvel when it comes to female characters; they’ve had success with Batgirl and recently Bombshells, but they have yet to reinvent their history and characters as Marvel is currently doing.

Why not start with Dolphin, a female character that rivals the powers of Aquaman and has limitless potential?

Dolphin’s main problem was she was written by people who didn’t know how to utilize her or be more creative.

Ezekiel McAdams is a freelance writer, and just finished his first novel, a YA fantasy fiction. When Ezekiel isn’t writing, he can usually be seen eating pie, gushing about Mars or cows, and being an obscure geek in all things Zak McKracken, Earthworm Jim, Bucky O’Hare, Sliders, and Over the Garden Wall. Ezekiel can be reached on Twitter @PocketFullOFish.