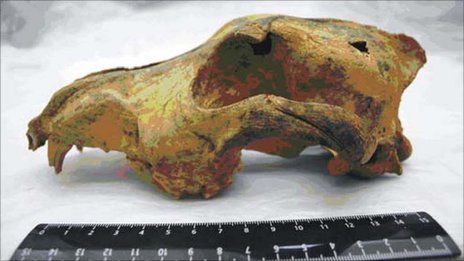 A newly discovered canine skull dating back 33,000 years may be some of the earliest evidence for dog domestication ever found. The skull was unearthed in a cave in the Siberian Altai mountains by an international team of Russian-led archaeologists.

The skull shows a mixture of traits seen in dogs and wolves. The snout is similar in size to early domesticated dogs in Greenland from around 1,000 years ago, but its large teeth are closer to those found in 31,000-year-old European wolves. The study, which was published in the journal PLoS One, suggests that the newly found skull may be from a dog in the extremely early stages of domestication.

Evolutionary biologist Susan Crockford, one of the authors of the study, told the BBC:

“The wolves were not deliberately domesticated, the process of making a wolf into a dog was a natural process. But for this to happen required settled early human populations. At this time, people were hunting animals in large numbers and leaving large piles of bones behind, and that was attracting the wolves.”

In general, wolves that are friendlier and more likely candidates for domestication have shorter, wider snouts, and smaller more crowded teeth. Over time, these traits have become characteristic of domesticated dogs. These early, friendly wolves would have helped people by cleaning up scraps left at camp sites and fending off large predators.

The skull is from shortly before the peak of the last ice age, but the researchers note that this dog seems to have hit an evolutionary dead end. Other evidence suggests that people in the Altai mountains did not keep dogs through the last ice age, probably because food was scarce. According to Crockford, the ice age also caused people to move around more, which may have delayed full domestication by as much as 20,000 years.

So, while the skull is certainly a unique find that suggests that humans and dogs were interacting closely during older periods of history, it isn’t proof that all dogs were domesticated that early.