Your Creepy Friend Who Acts Like Their Dog Is a Child is Actually Pretty Normal, Says New Study

Your creepy friend who named their dog something like "Brittany" or "Aiden," though... that person is odd. 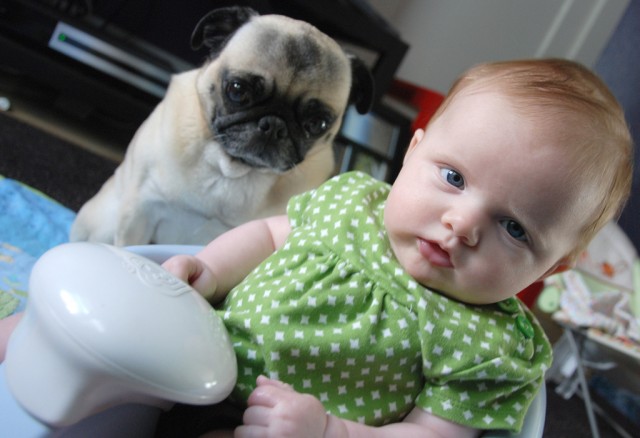 Okay, admit it — you have made baby-talk noises at an animal at least once in your life. It’s okay, we’ve all been there. Sometimes it’s just not possible to speak in rational, logical sentences in the presence of an adorable puppy. But apparently that’s not where the similarities between standard parent/child and owner/dog relationships end, according to a new study released by the University of Veterinary Medicine in Vienna. In fact, it’s only the wet-nosed tip of the giant dog-shaped iceberg.

In orderto test the way that dogs and their owners interact, Lisa Horn from the Vetmeduni Messerli Research Institute examined the way that dogs interact with their environment by offering them the opportunity to earn treats by playing with interactive dog toys. When their owner was not present, they were significantly less interested in getting the treat than when they were in the room. The amount of encouragement owners gave had no bearing on the dogs, either, as they were just as motivated to get the treat when their owner stood there silently.

Speaking of which, you know how “dog people” always say that dogs are better than cats because they give affection to everyone equally? Lies!  In a follow-up experiment, Horn and her colleagues replaced the owner with a stranger for one of the tested conditions and the dogs barely even interacted with them at all. So yeah, dogs are capable of being just as aloof as cats are — you just don’t notice because they’ve got you wrapped around their little, um, paws.

[Ed Note: The example cited here by Victoria is only one of the thousands of reasons why dogs are better than cats. — Glen]

Horn likens this phenomenon to the “secure base effect” that also exists in parent-child bonding: both dogs and babies use their primary caregiver as a frame of reference for everything in their environment. Therefore, when you’re out of the room, your dog really doesn’t feel the need to make much of an effort in being a dog. Less cynical people would probably say that this is because the dog loves you so much or whatever, but I think it’s because they know how easy it is to manipulate us. Sneaky, dogs. At least I know my cat has its own agenda.