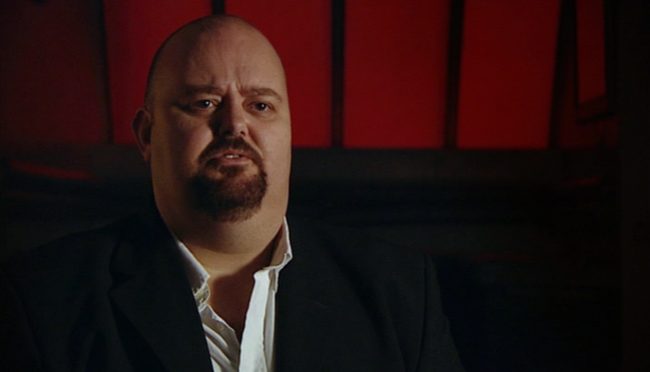 It’s hugely disappointing when someone you trust to tell you stories from one of your favorite sci-fi properties turns out to be a big ol’ transphobe.

Gareth Roberts, who’s written several things in the Doctor Who universe, including “The Shakespeare Code,” “The Unicorn and the Wasp,” and two of my favorite episodes, “The Lodger” and “Closing Time,” as well as episodes of The Sarah Jane Adventures and several Doctor Who novels demonstrated that he, unlike the Gallifreyan he’s so often written for, is closed-minded and ignorant when it comes to the LGBTQIA community. In this case, when it comes to the transgender community in particular. 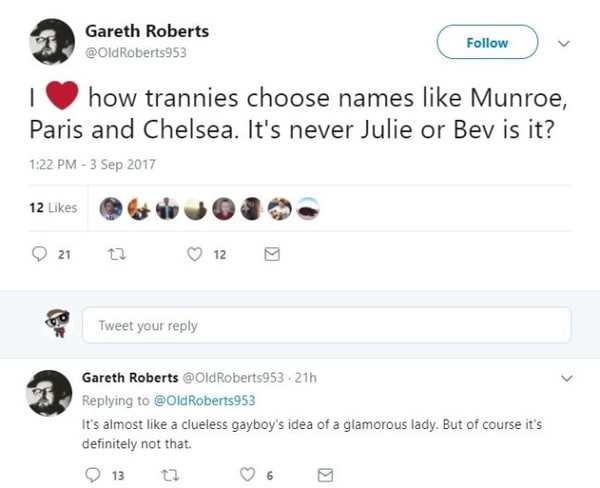 Use of a slur? Check. Transmisogynist (and in every other way sexist) commentary about what names women can choose for themselves? Check-check.

Roberts tweeted out the above comment seemingly out of nowhere. Why? Who knows? He was feeling particularly douchey that day, I guess. Not that “having a specific reason” would make transmisogyny any better, but a comment like this coming out of the clear blue sky just makes it that much more appalling. Like, this is not only what he believes, but he believes it so callously and inherently that something like this is his go-to joke.

This isn’t him being pointedly hurtful. This is him being “off the cuff” on Twitter. I don’t know which is worse.

There were those fans who hoped against hope that perhaps he’d been hacked. The comment seemed so random and surprising that if you’d told me that Roberts had lost control of his Twitter account, I would’ve believed it. I’ve actually met Roberts a couple of times at the Gallifrey One convention, one which plenty of LGBTQIA+ Whovians attend, and he never struck me as the kind of person who’d say stuff like this.

Yet once he started getting flack for the comment, Roberts doubled-down:

The Rainbow People are watching my every move now lads pic.twitter.com/FJFOiPwtBs

While he seems to have removed the original, offensive tweet, this one about the “rainbow people” remains on his feed. Because yes, poor Roberts. It’s getting so you can’t even use slurs against a marginalized group of people without jerks giving you shit, amirite?

Once again, we have someone with the benefit and privilege of a large platform spouting hateful things for all to hear. This is someone who is allowed to have influence over people by getting to create content and tell stories. This is why, despite him being “just some Doctor Who writer,” it’s important that fans of his work make it known that this kind of hateful speech can’t be tolerated!

It’s one thing for some random Joe Schmoe to spout this kind of ignorance about a marginalized group. It’s another thing to allow someone who can so easily say stuff like this to create stories for family television. Doctor Who is all about acceptance, and love, and learning about different kinds of people through time and space travel. The Doctor has two hearts, which means they have an enormous capacity for love.