Remember That Time The Doctor Met The Beatles? We leave you today with something remarkable. There’s been some interesting photos of individuals from days past that resembled people living today. For instance, John Travolta looked like a time traveler thanks to this old-time photo, and people were calling Nicolas Cage a vampire because of this one. But, uncovered today is a photo that might just show Doctor Who’s Matt Smith (or the Doctor himself if you prefer) hanging out with the Beatles! Hit the jump for a bit of explanation and a reaction from showrunner Steven Moffat!

Someone tweeted the image to Moffat, swearing it was real, and it quickly took tumblr by storm.

Neil Gaiman once discussed having the Doctor and Amy almost meet up with the famous British rock band in his episode (back when it was slated for the fifth season instead of the sixth) but honestly, WHY HAS THIS NOT HAPPENED YET? The series is almost 50 years old and though they’ve mentioned them many times, they’ve yet to have the Doctor actually interact with some of the most famous British people ever (there’s a Short Trip titled “Gone Too Soon” where he supposedly jammed with them but that was in a book)? Yes, Moffat, get on that.

So what do you think of that picture? Matt Smith IS always toying with his hair… 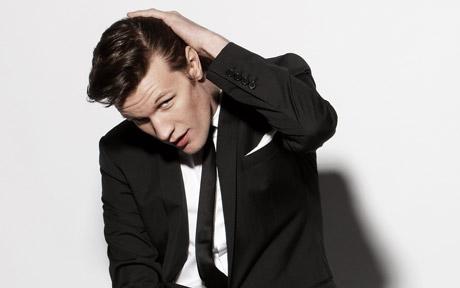