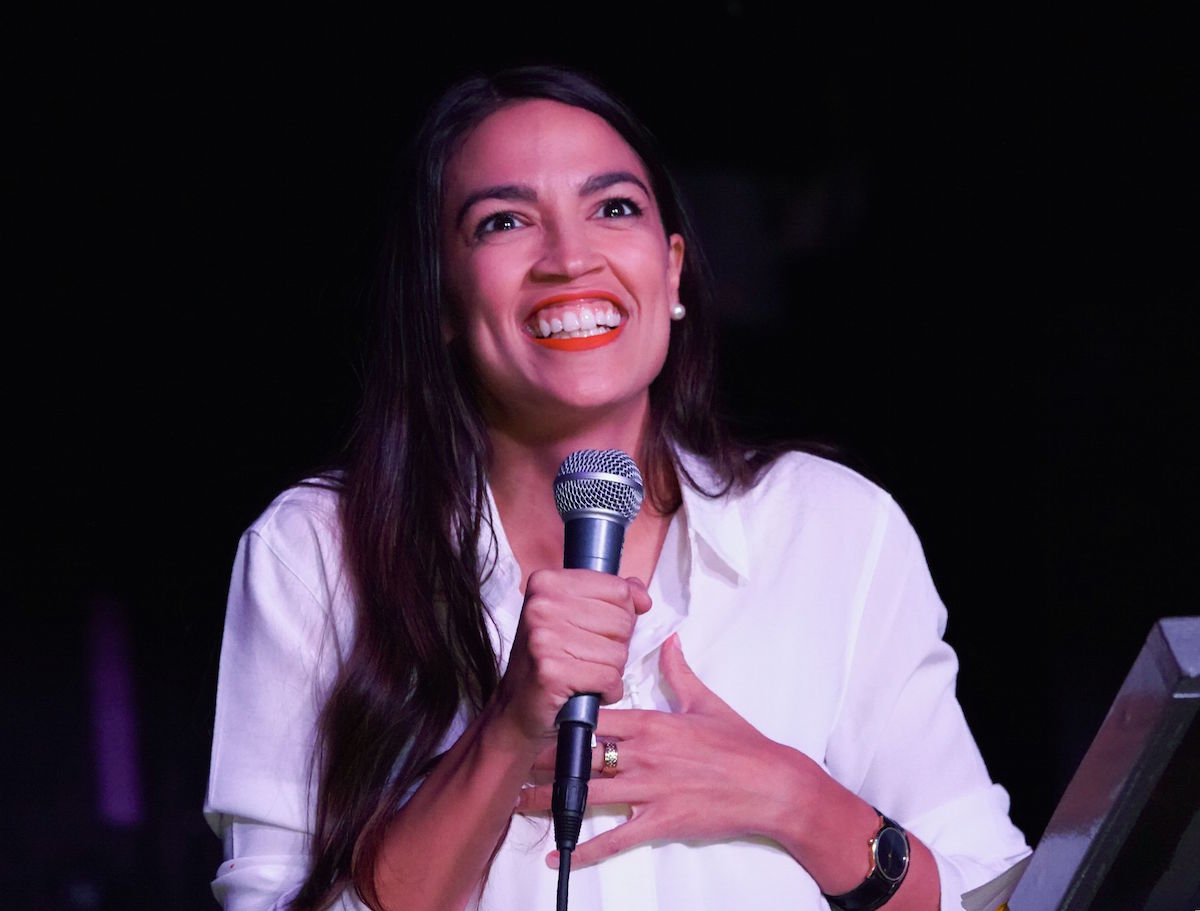 Another day, another conservative getting owned by their own attempted bashing of Alexandria Ocasio-Cortez. The most recent to join those ranks is the Washington Examiner’s Eddie Scarry, who posted a totally creepy picture of the Congresswoman-elect to Twitter, along with a caption suggesting her working-class image isn’t accurate. 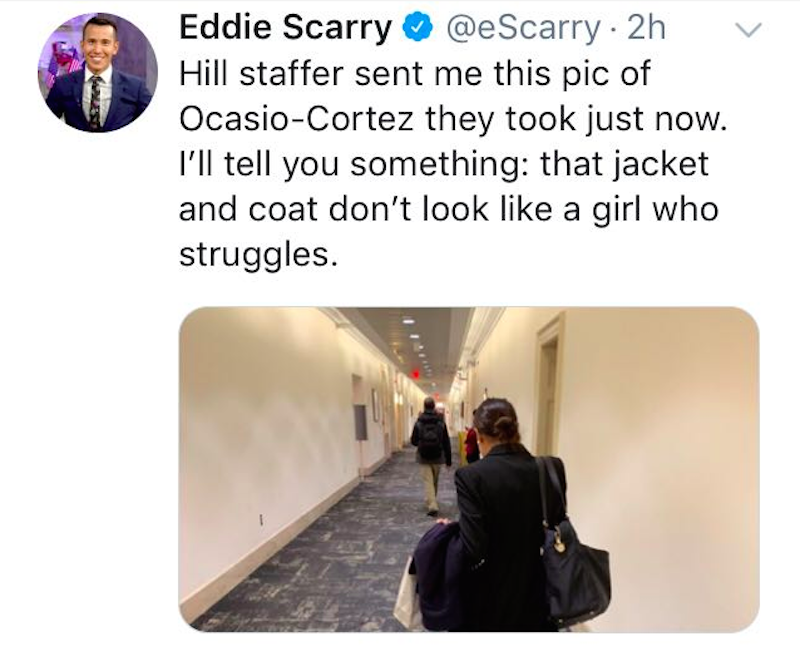 The rightwing media is obsessed with “proving” Ocasio-Cortez isn’t as working-class as she says, especially after she mentioned her difficulties in affording a place to live in Washington, D.C. despite having no job until she gets her start in Congress. Quibbling over specifics on that point is a very strange tactic for the right, who would usually love to paint the “political elites/establishment” as out of touch with working-class Americans, and no matter the details, Ocasio-Cortez is undeniably an outlier in Congress on that front.

It’s a weird fixation and sneaking photos like this, not to mention posting them publicly, is a creepy escalation. Naturally, Twitter had a lot to say about it. Like, really a lot.

Yes, how dare she look well put together during her congressional orientation.

EXCLUSIVE: The So-Called “Middle-Class” Alexandria Ocasio-Cortez Has Not Once Pressed Her Face Up to the Window of a Bakery, Longing for a Loaf of Bread

DOES SHE EVEN OWN A SINGLE BINDLE ON A STICK???

NEXT THING YOURE GONNA TELL ME IS WHEN SHE OPENS HER WALLET NOT A SINGLE MOTH FLIES OUT?!?!

Hill staffer sent me this pic of Ocasio-Cortez they took just now. I’ll tell you something: that jacket and coat don’t look like a girl who struggles. pic.twitter.com/UrP3uGrjVL

Hill staffer sent me this pic of Slen Darman they took just now. I’ll tell you something: that jacket and coat don’t look like a manifestation of teen loneliness turned insecurity-fueled bloodsacrifice who struggles. pic.twitter.com/eHQftdkG0r

Hill staffer sent me this pic of Huckle Cat and Lowly Worm they took just now. I’ll tell you something: that hat and bow tie don’t look like a worm who struggles. pic.twitter.com/KskdMIvVfs

.@Seinfeld2000 here is the episode you asked for https://t.co/mWWYdbM4Gy

He even got dunked on by the dictionary.

Girl. Noun. A female child, from birth to full growth.

‘The Ratio’: when the whole entire internet gets together to dunk on you https://t.co/Z9vscsPGHj

The tweet is especially inane because, as with conservatives’ continued “revelations” that Ocasio-Cortez didn’t actually grow up in the Bronx, their questions about her economic status would be answered if they read and listened to her own words about the matter.

Is this what passes for reporting now?

In a recent interview she actually said she got a Rent the Runway subscription as a gift. (It retails for $139 a month.)

I look forward to your important journalistic updates on what the incoming male members are sporting. 🙄 https://t.co/7tOpDugYHc

Scarry deleted the tweet and tried to use the old “I wasn’t thinking that, you were thinking that” argument in defense of his classism.

ATTN! I posted a tweet earlier suggesting the incoming congresswoman looked well put together — ELEGANT even — despite suggestions she’s struggled. The tweet was taken as something else, so I’ve deleted it!

That’s ridiculous, of course. He said exactly what he meant to the first time, declaring himself to be the arbiter of what non-wealthy women should and shouldn’t look like. And Ocasio-Cortez herself wasn’t going to let him off the hook.

Oh, does @eScarry think he can delete his misogyny without an apology?

I don’t think so. You’re a journalist – readers should know your bias. pic.twitter.com/2KJuiPsUR2

But as always, Ocasio-Cortez had the perfect response to this nonsense. These conservative figures are going to come after her no matter what, so she can’t waste time trying to appease them.

If I walked into Congress wearing a sack, they would laugh & take a picture of my backside.

If I walk in with my best sale-rack clothes, they laugh & take a picture of my backside.

Dark hates light – that’s why you tune it out.