We Need to Admit That Mary Poppins Is a Sociopath

This is what comes of watching Mary Poppins infinity times. 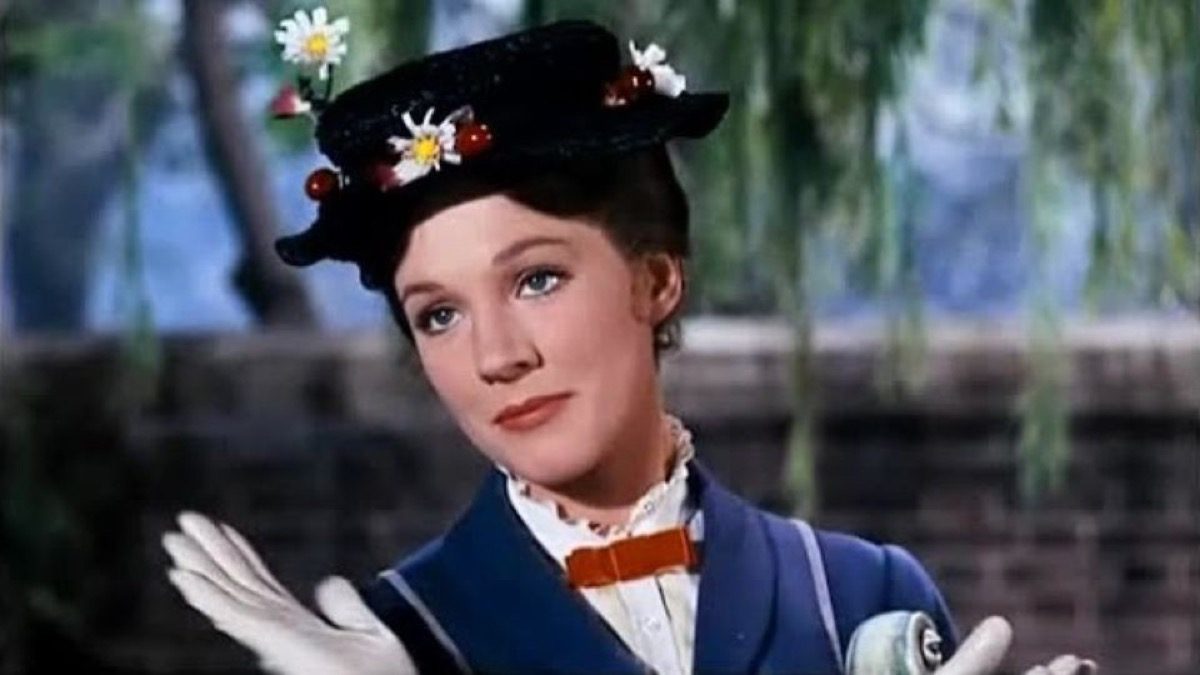 As the parent of a toddler who watches Mary Poppins at least once a week, there are a few things I know.

(1) The 1964 Mary Poppins film is indeed practically perfect in every way, and (2) Mary Poppins herself is not a nice person. Now, it’s debatable whether Mary Poppins is a person at all. She could be some ancient, eldritch being sent to spread chaos and madness among mortals. She might be an ange—or a Time Lord.

What’s clear is that Mary Poppins is a manipulative, lying, gaslighting jerk. It’s highly possible you haven’t realized this if you haven’t, like me, seen Mary Poppins eighty-seven times in the span of fourteen months, but trust me, I know what I’m talking about.

Get your spoons full of sugar ready; it’s time for some medicine.

Mary Poppins’ modus operandi (popperandi?) is that she makes the most peculiar things start to happen around her and then acts like they aren’t happening. She uses that confusion and consternation to do whatever she wants and steamroll everyone around her into her idea of correct behavior.

She forces her way into a job then makes poor Mr. Banks think he’s going nuts. She does blatant magic in front of Jane and Michael and then acts like they’re delusional and rude for mentioning it, or worse, that it’s a tiresome distraction from whatever errand they’re on. It’s highly ironic that the sequel (which we’ll get to, believe me) has a lamplighter as a main character, because this is classic gaslighting.

Mary doesn’t inspire imagination or creativity; she inspires paranoia, mania, and self-doubt. She’s the worst kind of adult: one whose actions are directly contradictory to their words and supposed beliefs, and the poor Banks family is lucky they had a real hero around to bring them some joy and help them learn important lessons. 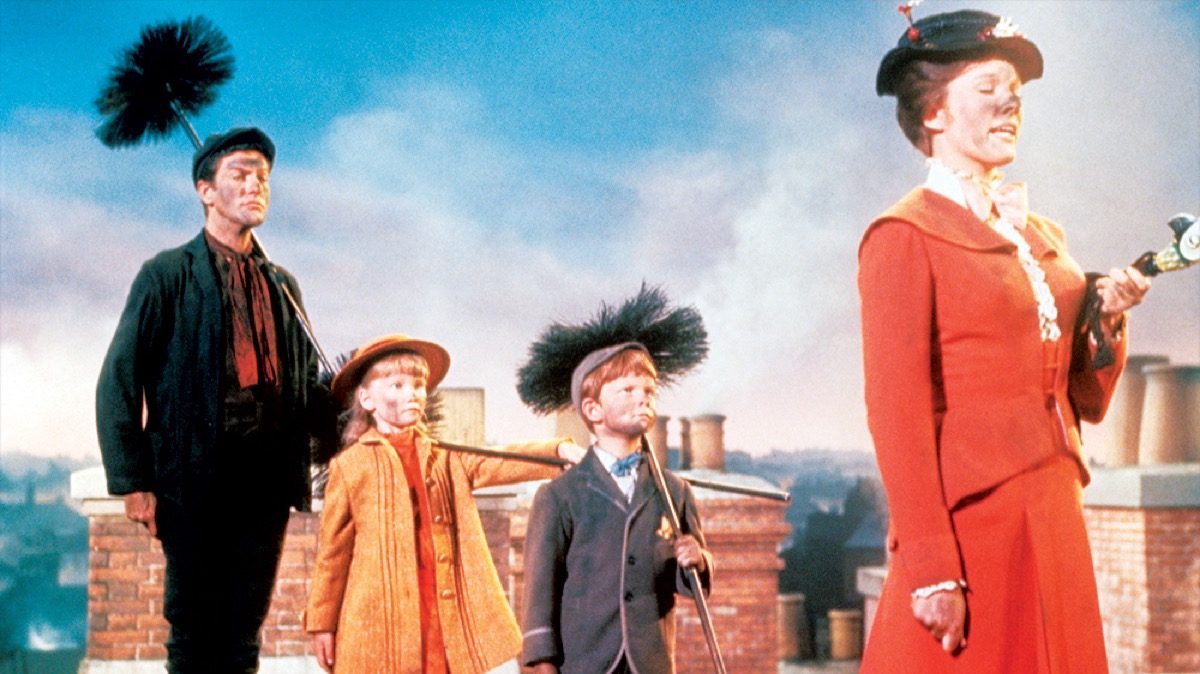 Despite Dick Van Dyke’s less-than-great “cockney” accent, this jack-of-all-trades is the true heart of Mary Poppins. He’s honest with the kids, he’s fun, he’s hard-working and innovative, and most importantly, he’s there to dispense some candid, good advice to the Banks family when they need it.

When Jane and Michael are upset with their father, who’s there to explain to them that Mr. Banks is a slave to the capitalist system? Bert. When Mr. Banks is at his lowest and needs reminding that it’s his family where the real riches come from, who’s there to sing to his heart? Bert! But does this hero of the proletariat get any credit? No! Mr. Banks quits his job singing a song he wasn’t even onscreen to hear and gives Poppins all the credit.

It’s no wonder the family doesn’t even say goodbye to their nanny at the end; they’ll have a happier and much less abusive time without her!

Now, all of this isn’t to say that Mary doesn’t have her charms. I used to buy into the story that Julie Andrews won the Oscar for Mary Poppins as a consolation prize for being denied the chance to repeat the role she created on Broadway in the film version of My Fair Lady, in favor of Audrey Hepburn. But really, it was through a true feat of acting and charm that Andrews made Mary Poppins likable at all, when she’s really a terrifying creature bent on sewing discord and doubt among all she encounters.

Andrews also had the help of some of the greatest Disney songs of all time, including Walt’s (and my daughter’s) personal favorite, “Feed the Birds.” It’s a perfect piece of music, and its theme—to pay attention to the little wonders, the things that aren’t magical at all—is the best message of the film. It’s the nicest and least heartless thing Mary Poppins shares with the children. You may not have thought of it this way, but since I get to sing this song every single night, I’ve had some time to meditate on it.

Since my child is, to put it mildly, obsessed with Poppins, it was a logical choice for us to make Mary Poppins Returns her first movie in a theater. She spent the entire twenty minutes of previews (dear god, why) asking, “Where’s Mary Poppins?” and I spent it hoping that this new outing would make Mary herself a little kinder and a little less prone to convincing people they’ve gone insane. 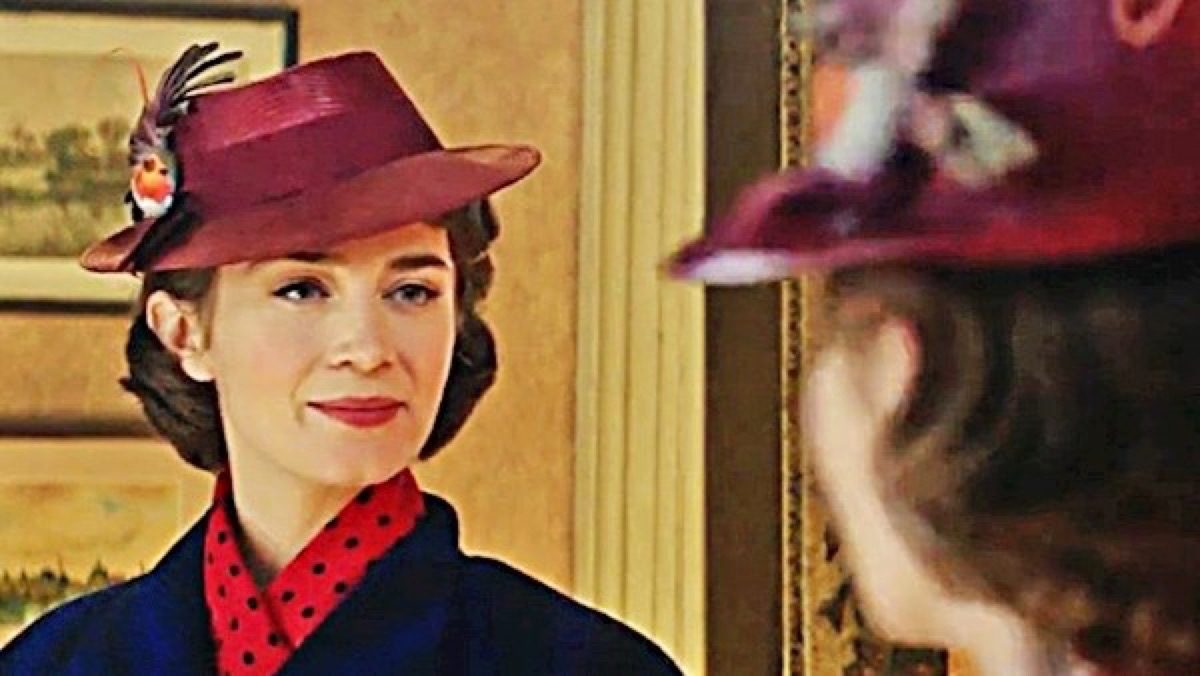 While my kid deeply enjoyed it any time people were singing (except for Meryl Streep, which she found as baffling a cameo as I did), I was a bit disappointed. This version of Mary was explicit in hyping up the joys of “imagination,” yet was still adamant that the extraordinary things she did, and that people saw, were just ordinary, or didn’t matter.

Many children’s movies walk a fine line between making it explicit that all the magic is in the minds of the characters or that it’s real. Both Mary Poppins films try to have it both ways, to the psychological detriment of the Banks family and their friends.

At least the original Mary took her charges on age-appropriate outings, while Emily Blunt’s version takes them to a bawdy burlesque hall, where she gets so caught up singing with Lin-Manuel Miranda (which … understandable) that she loses track of the children in the magical dreamscape she created, and they end up in mortal peril! For all her faults, Andrews’ Mary Poppins was a semi-competent caretaker, while Blunt’s lets them wander off every other.

Neither Mary acts at all emotionally invested in these kids, so it’s understandable.

The problem with Mary Poppins Returns as a movie is that it attempts to ape the original in all the wrong ways, while adding some of the worst Disney tropes. (A dead mother! A useless love story! A powerful man saves everyone!) It’s nearly a beat-by-beat retread of the 1964 film’s structure, down to a disaster at a bank followed by a dance number from charming working fellows of a bygone era.

Mary Poppins herself is still haughty and almost cruel, but this time, instead of Julie Andrews’ soprano charms elevating her to a mischievous diva, we’re left with Blunt singing alto, trying to bring life to a character who might not even be human and has no clear personality beyond her own smug practical perfection.

The greatest asset Disney had in their arsenal for this film was the original score, and it’s squandered. While we hear a few bars of the familiar tunes, we never get a reprise of any of those iconic songs, and instead, we’re saddled with derivative, repetitive numbers that sag under the weight of trying too hard. Again, the highlight of the film is the working-class sidekick, and Miranda does a great job with a character that’s about as poorly sketched as Poppins, but having such a genius in the movie still feels like a wasted opportunity.

The original Mary Poppins, it turns out, remains a wonder of a movie because it caught lightning in a bottle—perfect music, a perfect cast, and a deft touch that made a character who isn’t really a very nice person into an iconic heroine. Even though Mary is a tool, I don’t mind watching it over and over (and over) because it’s bursting with sincere joy and lightness.