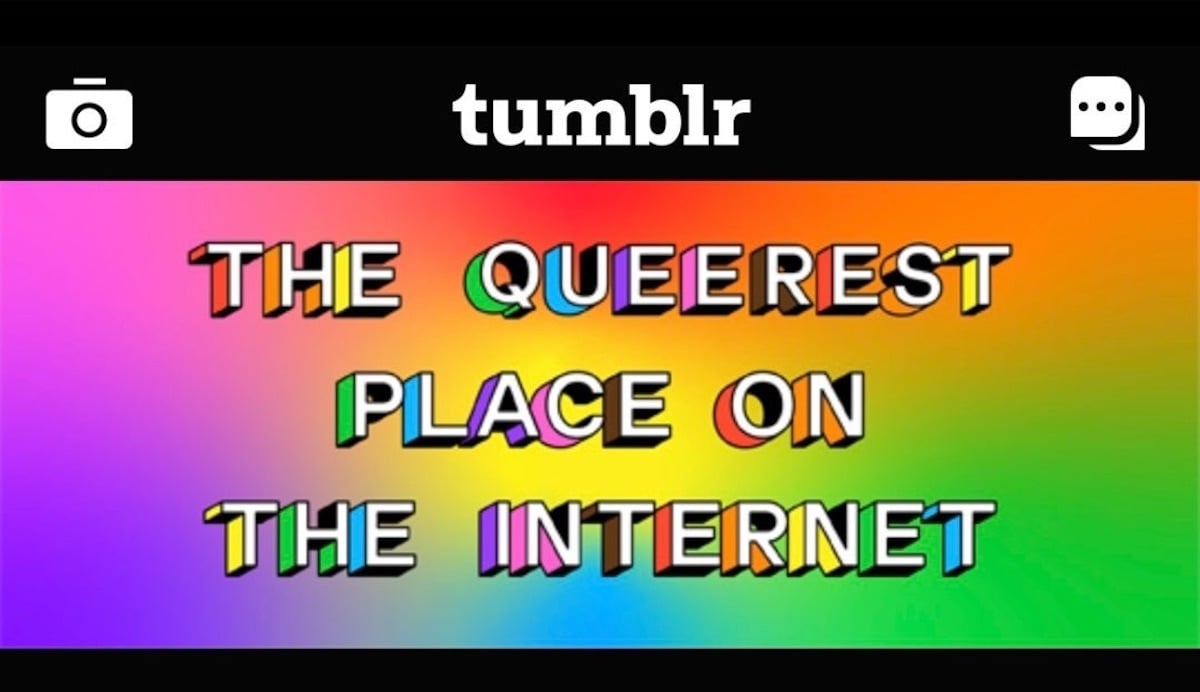 As I checked Twitter this morning pre-coffee (truly a mistake on my part) I came across this tweet:

Well, there’s no way around it: @tumblr is one of the queerest places on the internet.

How queer? Apparently, folks on Tumblr are 193% more likely to identify as LGBTQIA+ than on any other social media platform … including t.w.i.t.t.e.r. Is that you? Are you #tumblrqueer? pic.twitter.com/42jEbt2Nto

Did I mention that this is now their Twitter bio: 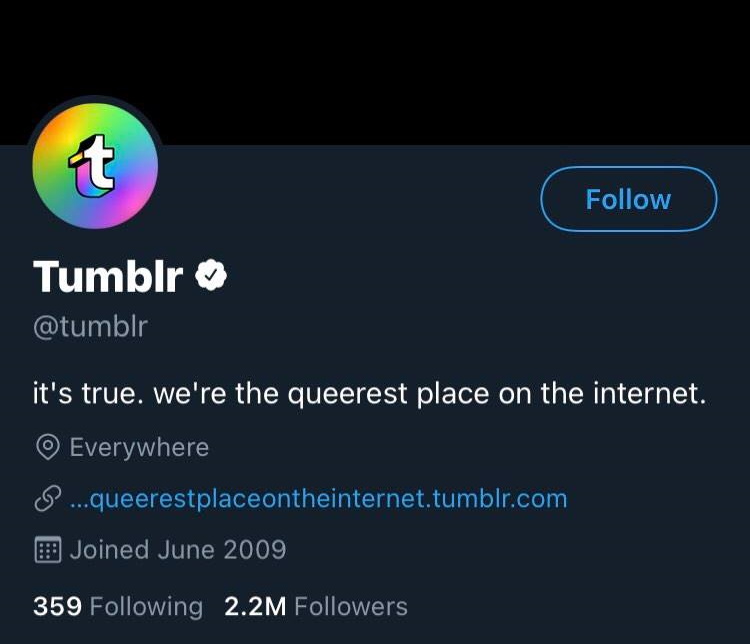 For those who don’t remember the great Tumblr content purge of 2018, our very own Kaila Hale-Stern has an entire write-up on the abysmal flub up and how it affected the queer community and other marginalized groups, making this #tumblrqueer tweet a bit, shall we say, full of shit?

It didn’t take long for the tweet to get rightfully ratioed: If you’re not familiar with that Twitter phenomenon, Urban Dictionary defines it as “Being revealed as an idiot on twitter by having a high ratio of comments to likes and retweets.”

You actually annihilated a massive queer safe space on the internet after you folded to weird puritanical culture rules about “female presenting nipples” and NSFW artwork.

You don’t get to wear “queer” like a badge of honor when you actually destroyed so much queer artwork.

Tumblr after your ban on “adult content” you removed all of my top surgery recovery photos citing that my nipples were “female-presenting”
So you took down my photos and actively misgendered me in the process.
I can only say: who do you think you are

How about you get rid of the rampant TERF and nazi problem on your site? You can’t claim that rainbow while you allow such hate on your platform.

My initial plan was to spend a couple of hundred words dunking on Tumblr, but something occurred to me as I read through the responses. What would make Tumblr suddenly dip their toe into rainbow paint on Twitter (sorry, I meant t.w.i.t.t.e.r.), come up with a hashtag, and put, quote, “queerest place on the Internet” in their bio? That’s when I realized what month is coming up in a couple of weeks.

Being a Black, queer woman during Pride Month is a bit of a back and forth with my feelings. On the one hand, I’m happy to see the acknowledgment of the queer community and the “for my wife” greeting cards that recognize that it could be a woman giving a card to her wife. On the other hand, I dread the increase of hastily Scotch-taped together rainbows and #PrideMonth in Twitter handles that will inevitably be forgotten come July 1st.

So how do we tell when a company/brand/person is being genuine or is doing something for the clicks?

The first thing I look at is how much effort was made in the sudden attempt at inclusivity. Maybe I’m spoiled by the indie creator community and the sheer amount of queer content it has to offer via the likes of Kickstarter, inclusive hashtags that go around all year round, and having queer merch at the ready in a convention artist alley, but sometimes I see the June offerings from major companies and think, “Cool. There’s a rainbow on the label. Thanks?” It’s kinda odd to see a movement about your right to exist be boiled down to an endcap at a department store with thrown-together products like “mouthwash with a rainbow logo.”

At the same time, I adore the annual Pride collection from Converse that started back in 2015.

I think what helps me come to terms with the commercialization aspect is how much effort a company puts into their product and that company’s history with the community. Converse, for example, has been doing this for years, complete with a theme and queer partners. It also helps if the company shows that they aren’t gonna vanish into the abyss come July 1st. Ben & Jerry’s, as another example, has an entire page on their website dedicated to the causes they believe in, and that page doesn’t just exist when a particular social movement is trending, it’s there all the time. This means when they do come out with themed ice cream or make a support post on social media, you know that they’ve got your back past June.

Circling back to the company’s history with the community, I think it’s important to look into what a brand’s track record is with us. That might sound like a daunting task, but trust me, in the age of social media, folks will let you know REAL quick if a space, well, did what Tumblr did—even if it was years ago.

In the case of Tumblr, there is a pretty well-documented series of tweets and articles explaining why their decision to remove adult content hurt the queer community and the hypocrisy of what was allowed to stay on the blog (see tweets above). This is something to keep in mind when you see your social media space suddenly littered with rainbow logos and attempts to look supportive in June. It feels extremely disingenuous to see someone showing support, and even celebrating inclusivity after such a damaging thing took place.

Tumblr won’t be the only one who does this.

Throughout the month you’re likely to see spaces trying to boost queer voices, even if they themselves lack queer input, or even if they have a history of discriminatory behavior against queer people. Like. It feels kinda rotten if I see a company celebrating Pride that has no queer people on staff, has donated to anti-queer causes, or any number of things that scream “I’m just here cuz it’s June kthnxbye.”

If that’s the case, an important question to ask is if they’ve ever addressed whatever they did wrong. Have they held themselves accountable and, more importantly, have they made attempts to do better? Have they listened to the feedback they’ve gotten and implemented it? There are likely many spaces with a negative incident involving the community, especially since we’re still fighting for the rights of queer folks today, so the steps they’ve taken to prevent further harm are important in deciding whether or not you should support them.

It also doesn’t mean they’re queer-friendly toward EVERYONE who’s part of the queer community, and not just in the case of inclusivity (since you can be accepting of my queerness, but not my Blackness), but in the case of, “Yas queen I love Pride and gay people let’s drink and be merry … but I don’t wanna share a bathroom with a trans person and I’m not gonna use your correct pronouns.”

A major critique that comes up during Pride Month is how a lot of spaces will acknowledge, and boost, a single aspect of the rainbow (generally gay men) and leave it at that. This excludes a lot of other folks in the community, and unfortunately, in some cases, those folks are seen as ruining the vibe if they dare to bring it up. When June rolls around and spaces add that rainbow flag emoji to their name, that should also include the rest of the acronym.