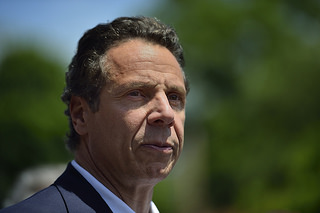 The 1945 law stated that that people are entitled to equal opportunities for employment, education, medical treatment, housing, and more regardless of qualities like “age, race, creed, color, national origin, sexual orientation, military status, sex, disability, predisposing genetic characteristics, or marital status” (some agencies differ in groups explicitly listed). The NY Times reports that Cuomo said he would direct the State Division of Human Rights to issue regulations that include gender identity, transgender status, and gender dysphoria to the law, stating:

The law left out the T, so to speak. That was not right, it was not fair, and it was not legal. Transgendered individuals deserve the same civil right that protects them from discrimination. (Update: Many pointed out Cuomo’s use of “transgendered” rather than “transgender” demonstrates a gap in knowledge, something definitely worth noting. Hopefully these changes in law are steps towards more public awareness towards transgender issues and the words we choose.)

While we know that discrimination exists regardless, Sarah Warbelow, legal director of the Human Rights Campaign says “it always is valuable to have a legislative body to affirm protections.” HRC Blog notes that after the New York State Senate failed to pass the Gender Expression Non-Discrimination Act, which would have explicitly prohibited discrimination on the basis of gender identity, Governor Cuomo’s actions are especially important.

(via Human Rights Campaign, Image via Diana Robinson on Flickr)