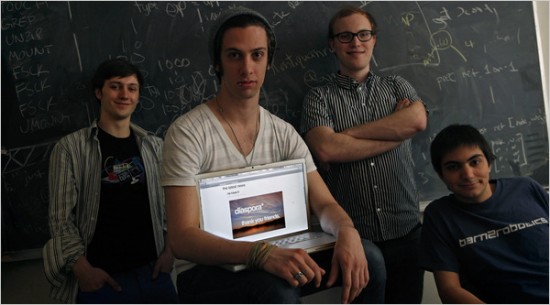 This morning’s New York Times features a story on a group of NYU undergraduates working on a would-be Facebook killer called Diaspora*, the software for which “will let users set up their own personal servers, called seeds, create their own hubs and fully control the information they share.” The article is a neat read both for the specifics of the proposal and the anti-Facebook sentiment it highlights amongst young’uns in the tech community; it also marks what may be the first time a dirty UNIX joke has managed to sneak into the hallowed pages of the Times.

A tipster draws our attention to the writing on the left side of the chalkboard behind the students: “TOUCH GREP UNZIP MOUNT FSCK FSCK FSCK UMOUNT.” Wait a second: That’s not intelligible code! It’s almost as if it has another meaning.

Pretty much every command on the blackboard is missing the argument(s) that makes it useful (e.g. filenames for ‘unzip’ and ‘touch’). So: Dirty joke. fsck, which is short for “file system check,” has a long and storied history as programmer profanity.

As a preemptive ward against concern trollery, it would be absurd if the students profiled in the piece are in any way reprimanded for this or if this takes the spotlight off their accomplishment. They probably didn’t write it themselves (it looks like a standard classroom chalkboard previously written upon — a fertile ground for geek vulgarities if ever there was one), and even if they did, the substance of the work they do is far more important.

So: Score one for the geek team, managing to slip some sexual code into a paper so staid, it sometimes doesn’t even print the names of bands it’s reviewing.

Update: In response to our post, it looks like The New York Times has recently cropped the photo as it appears on their website to remove the offending code; we’re investigating to see if it made it into the print edition. 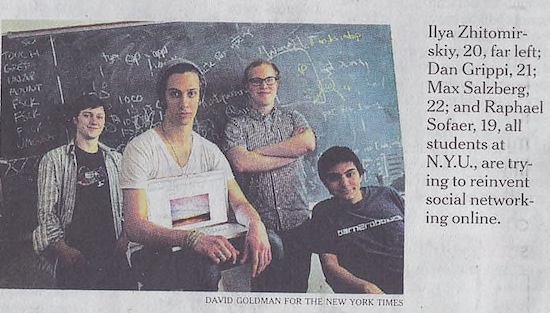