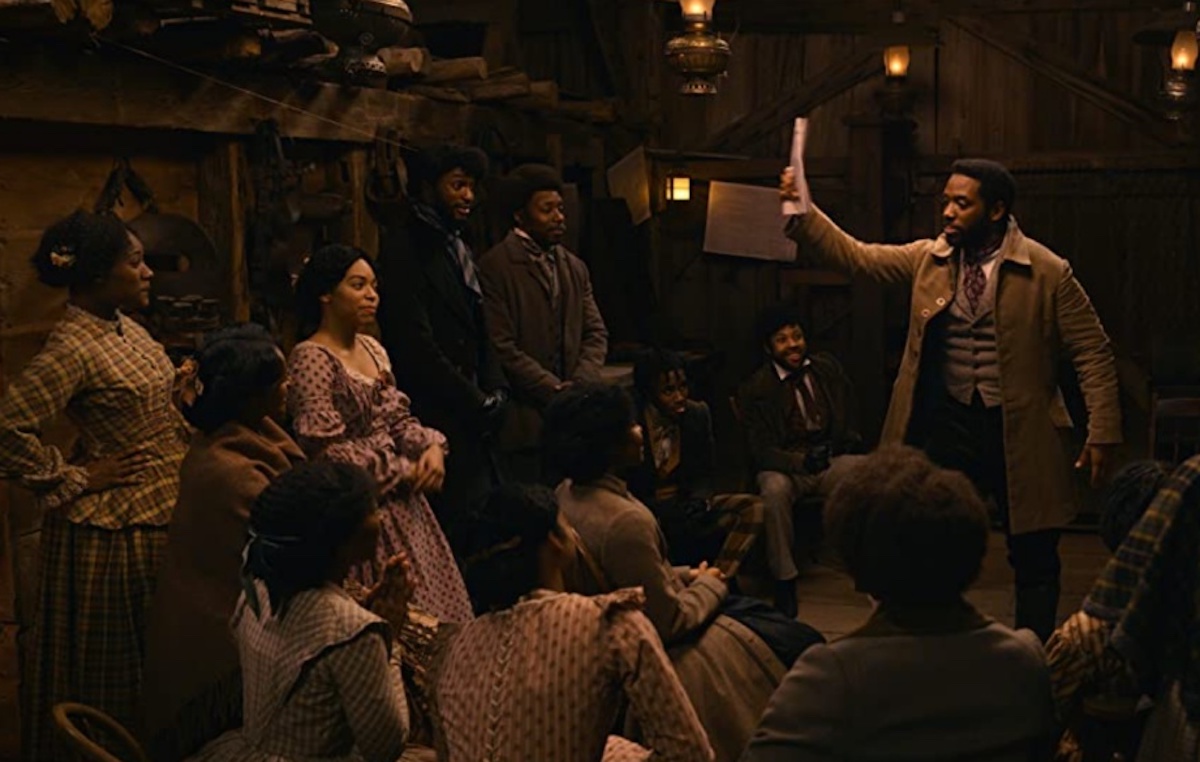 AppleTV+’s Dickinson is a strange show, but I keep coming back because (a) I’m a Hailee Steinfeld stan since True Grit, and (b) I think that it is constantly evolving to allow the show to be as profound and complex as its titular lead.

Period dramas have struggled often with how to integrate people of color, whether they can just do it in a colorblind manner, a mixture, or just be brutal. Dickinson is one of the few that I think has struck a good balance between acknowledging the time period and situation of Black people, while still allowing them to have joys.

Chinaza Uche plays Henry, the hired hand to the Dickinsons who is also writing an abolitionist paper, The Constellation, that has taken up a lot of the b-plot spotlight throughout the season. He runs the meetings and produces it in the Dickinsons’ shed. We get moments where we see Henry talk to his wife Betty (Amanda Warren) about the harassment they face. His dedication to the movement isn’t just a one-time thing, but sometime that impacts his life.

The other recurring Black character we see in the show is Ayo Edebiri’s Hattie. Hattie is a writer as well, penning ghost stories for the paper, but also a maid who hustles white people out of their money by putting on seances. She has a strong personality and despite not being in many scenes, Hattie is shown to have a life outside of the Dickinsons and work.

Ayo Edebiri is also a staff writer on the show and worked on the latest episode, “I’m Nobody! Who are you?” In that episode, one of Emily’s poems is finally published in The Springfield Republican. However, she wakes up invisible and spends the day spying on people’s reactions to her work. She ends up going to the shed and witnessing Henry’s celebration of his efforts with the paper.

It is a scene filled with Black people talking about the coming sea of change. They mention John Brown, the American abolitionist leader, and are, in general, hopeful about their progress. Then Hattie steps up, removes her cloak, and reveals a fancy gown she has “borrowed” from Sue Dickinson, and the entire cast of Black people just start dancing and celebrating.

I loved this scene.

Not only because it is probably the largest amount of Black people I’ve seen in a non-slavery period drama, but that it highlighted something very special about Black people. In the face of slavery, Jim Crown, colonization, and all the ills that have befallen us, we have found time to have joy amongst ourselves. Our lives and our history were not just suffering; it was the small triumphs found in our communities that are an equal part of our story.

On a textual level, the episode also served to highlight that for every name and voice we have preserved in Black History, there are many invisible ones—many who sacrificed their time, energy, personal relationships, and safety to fight for their own freedom. They are unsung by history, but they still existed.

I’m glad Dickinson highlighted that, and it is always good to see Hailee Steinfeld among the culture. I’m grateful that Ayo Edebiri was a part of this episode and crafting it, especially during an already exhausting Black History Month.