Dame Diana Rigg and Rachel Stirling to Star In New Doctor Who Season! 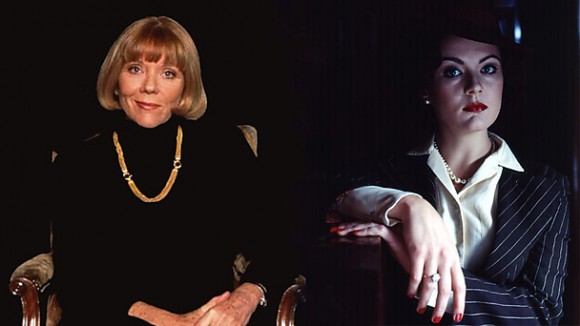 Dame Diana Rigg is probably best known as Emma Peel from 1960s British “spy-fi” classic The Avengers. Don’t panic, there wasn’t a Marvel TV series that you didn’t know about. The Avengers chronicled the  crime-fighting adventures of Dr. David Keel and a succession of female sidekicks, including the illustrious Diana Rigg, a veritable 60s sex symbol. She will star alongside her daughter, Rachel Stirling, for the first time in the new season of Doctor Who. Hit the jump for the press release!

Mother and daughter Dame Diana Rigg and Rachael Stirling are set to star side by side in the BBC Wales drama Doctor Who, the first time the pair have ever worked together on screen.

Character details remain under wraps, but the episode penned by Mark Gatiss will see Dame Diana and Rachael recreate their off-screen relationship on-screen, as they play a mother and daughter with a dark secret.

Starring alongside the Doctor, Matt Smith and new companion Jenna-Louise Coleman, the episode will air on BBC One in 2013 and is directed by Saul Metzstein. Filming begins this week (2 July) at Roath Lock Studios in Cardiff.

Dame Diana Rigg, who will play a Yorkshire local, said: “The first time Rachie and I will be working together is on an episode of “Doctor Who” specially written for us by Mark Gatiss. How lucky is that?”

Her daughter, Rachel Stirling, is best known for her portrayal of Nance Astley in BBC’s drama Tipping the Velvet, a queer miniseries based upon the acclaimed novel by Sarah Waters.

For many US fans who might have no idea who these women are, let me hype this casting decision up for you: Diana Rigg is often considered a feminist pop culture icon. During her run on The Avengers, she balanced a staunch work ethic, professional relationships, and unabashedly wore a kinky S/M suit while infiltrating an establishment called the Hellfire Club (no, not THAT Hellfire Club) as part of her cover. A woman with a history of playing a badass, competent spy, unashamed of her sexuality? Thank Moffat!