REVIEW: The Devil All the Time Showcases the Darkness Within 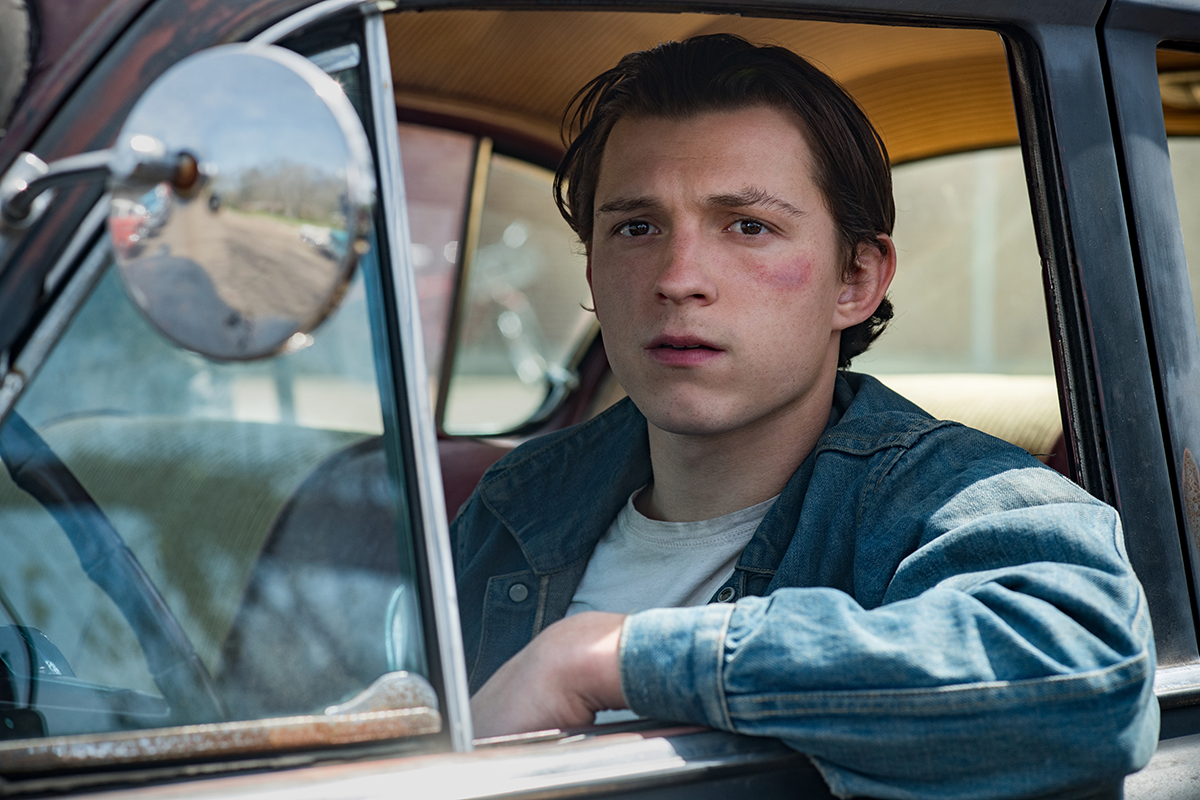 ** Spoilers for The Devil All The Time within.**

There are very few “perfect” adaptations of a novel into a film or television series. Often times, one is better than the other. For The Devil All the Time, the movie and the source material are sort of two separate entities, telling us of the horrors of Meade and Knockemstiff, Ohio. Both weaving a tale of predators and their prey, their story isn’t one that’s meant to uplift us. Even at its heart, the “hero” we’re rooting for is a young man named Arvin Russell (Tom Holland) who, when it is all said and done, has blood on his hands, too.

Set in Ohio, West Virginia, and in the car of a couple who lures in their “models” before sacrificing them for their art, both the novel and the film show us the dangers that religious zeal can have for a person. When the characters are faced with making decisions, they turn to God and put their blame onto the higher being instead of looking at themselves and their choices.

The film starts with us meeting Willard Russell (Bill Skarsgård) as he comes home from World War II and meets his future wife, Charlotte (Hayley Bennett). The problem is that Willard was “promised” to Helen Hatton (Mia Wasikowska) by his mother, who prayed to god to return him safely in exchange for that promise. It starts a theme throughout the film about the idea of what we promise God and how that leads us to making mistakes or blaming ourselves for things completely out of our hands. When Charlotte gets sick a decade after they’re married, somehow, that sickness is connected (in their minds) to this “promise” that Willard’s mother made to God.

When Willard and Charlotte’s son, Arvin (played as an adult by Tom Holland), is orphaned and forced to go live with his grandmother, he’s already seen far more than any child should, and he’s not alone in that. His “sister” Lenora (Eliza Scanlen) is the daughter of Helen and a preacher she met named Roy (Harry Melling) who was convinced that he had the power of God within him and could resurrect the dead.

The idea of punishment from God, as well as those who supposedly uphold God’s will, is heavy in the piece, constantly reminding each player that they are a “sinner” and how each of those people navigates avoiding the truth. The Devil All the Time is a delicate balance of those who believe God is leading them down a certain path and others who just believe that God is their meal ticket.

The predatory Preston Teagardin (Robert Pattinson) and the alcoholic mess of a police sheriff named Lee Bodecker (Sebastian Stan) are two examples of how these men of “power” turn to abusing it for their own selfish beliefs. Teagardin uses “God” as a way of preying on young women and acting as if he has done nothing wrong if one is to fall pregnant. Bodecker, while not directly using God in his quest for power, does use the fear of God that exists within his jurisdiction to gain his status. And when his sister Sandy (Riley Keough) and her husband Carl (Jason Clarke) threaten to upset that balance with their murderous vacations, Bodecker will do whatever it takes to keep that fear on his side.

And then there are those who will willingly sacrifice important parts of their lives out of the fear of God. While Willard and Charlotte had their ups and downs, the fear that took over Willard led him to believe that God wanted a sacrifice out of him in order to save his wife. And then there is Roy, who just believes that God spoke to him and gave him a gift, until he thinks God is testing his belief in this gift, leading him to do the unthinkable to prove his faith.

And through all these people, those who live in fear of God and those who use that fear to their advantage, there is Arvin Russell as some kind of hero. And even then, he’s not someone you would want to aspire to or even come in contact with, but that’s sort of the point of The Devil All the Time; we’re not supposed to like these people. They’re not anyone we should root for because sometimes, there are those monsters in the world.

Through twists and turns, what we’re reminded time and time again throughout The Devil All the Time isn’t that the Devil lurks in the shadows; it’s that the Devil lives within man. Each new character brings a new “devil” to light, and we’re shown over and over how each man makes a decision that impacts not only himself, but everyone around him.

Narrated by Donald Ray Pollock (who wrote the novel the film is based on), the movie does a  phenomenal job of weaving in voiceover to connect the stories while showing how all these characters weave together. Everyone is a sinner and the only character who is, arguably, the most innocent is the one who recognizes his sins.

It’s not for the faint of heart, and it’s not for those who refuse to recognize the darkness in this world, but The Devil All The Time is a great reminder that the thing we have to fear most in this world is our fellow man.

The Devil All the Time hits Netflix on September 16th.