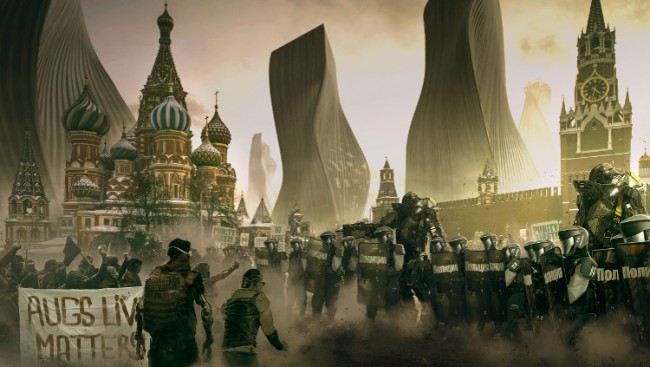 Some new promotional art for Deus Ex: Mankind Divided has surfaced, and more than a few fans are unhappy with one of the political slogans portrayed therein. The slogan in question, “Augs Lives Matter,” was ostensibly a reference to the Black Lives Matter movement, which, as their mission statement explains, formed “in response to the sustained and increasingly visible violence against Black communities in the U.S. and globally.” However, in Deus Ex, the slogan is used to instead refer to cybernetic-augmented humans, called “Augs” within the game’s universe.

While the art attempts to invoke the same feelings and emotions around the BLM movement, the comparison falls pretty darn flat and comes across as a bit tone deaf. To take a phrase like “Black Lives Matter” and apply it to the situation in this game feels like appropriation. It waters down or reduces a very real, very powerful statement on identity politics in the real world.

Now, it’s very clear what the game’s creators were trying to do–don’t get me wrong. I can tell that they were trying to tie in the events of the game to real life events here and now. But rather than taking a concept and expanding upon it, which is something that the science fiction genre always does, Eidos Montreal has just straight up taken it. They haven’t added anything new to the discourse or dialogue; they’ve simply taken something that wasn’t really theirs to begin with in order to exploit the same feelings and sentiments.

Even if SOMEHOW in game the whole “Aug Lives Matter” is done really well, in advertising it is devoid of context and highly problematic.

“Aug lives matter” is political pastiche. It’s a Family Guy reference joke, but serious. It has no meaning other than what it steals.

Last year, Eidos Montreal stirred up some controversy in their use of the term “mechanical apartheid” in a promotional tweet for this game. Folks called them out for their use of the term “apartheid,” citing many of the same reasons why “Augs Lives Matters” is a problem. In a chat with Polygon, Jonathan Jacques-Belletete, the game’s director, came out in defense of the use of the phrase “mechanical apartheid,” saying: “It’s a form of art, the people outside don’t think it’s art, it’s just stupid games. We’re fighting against those people. And then when we’re dealing with serious subjects suddenly we’re treated as little kids that are just doing video games again. This whole thing is completely ridiculous.”

The use of real life movements and political sentiment isn’t unique to Deus Ex, nor video gaming in general. The thing is, often times these big budget video games fail to bring the amount of depth and gravitas that inherently exist within such movements or phrases. Simply put, their track record here just doesn’t show that they’re handling this issue respectfully, thus making it hard to offer them the benefit of the doubt.