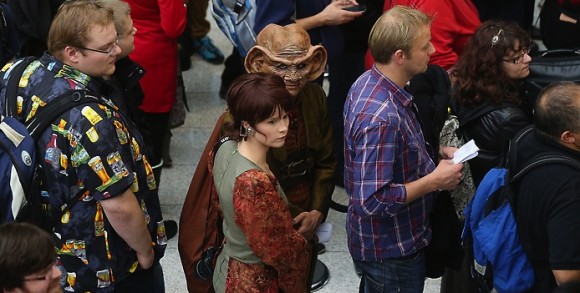 Last weekend’s Destination Star Trek London convention was notable for more than being the place where all five Star Trek captains appeared together for only the second time in history. It was also the site of a little bit of record breaking: The 1,083 cosplayers at the event broke the record for largest gathering of people dressed as Star Trek characters.

(I’m guessing that that also breaks the record for largest number of people dressed as characters from any single TV franchise, Star Trek or not—there’s no specific mention of that, but it seems a reasonable assumption, no?)

The record was previously held by the 1,040 cosplayers at last August’s Las Vegas convention. The majority of the cosplayers at the London event, the first Star Trek con held in Britain in over a decade, went the Starfleet uniform route, though there were some Vulcans, Klingons, and Romulans on hand as well.

Explains Dawn Harris, who dressed as an Orion slave girl, “There just hasn’t been a convention in the UK for so long. So I think everyone wants to be involved in everything as much as they can.”

Internet, I am very disappointed that I’ve yet to a set a picture of all 1,083 <em>Trek</em> cosplayers in one place. Deliver, darn you!