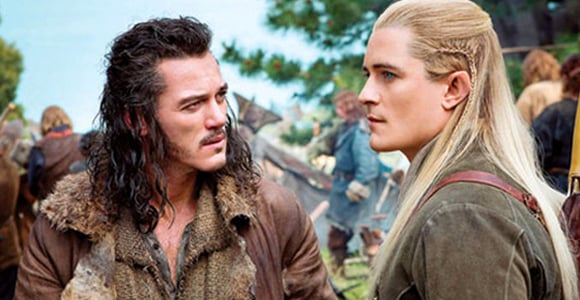 Just the other day I was having a conversation with my brother about Peter Jackson’s The Hobbit. The only exposure he’d had to the story was the Rankin/Bass animated feature we grew up on and he was surprised there would be three whole films from Jackson. “But aren’t they already up to the dragon?” he asked. Yes. Yes they are. Thanks to a new official, and in-depth summary, we now know exactly what to expect from The Hobbit: The Desolation of Smaug. Take a look.

From Academy Award®-winning filmmaker Peter Jackson comes The Hobbit: The Desolation of Smaug, the second in a trilogy of films adapting the enduringly popular masterpiece The Hobbit, by J.R.R. Tolkien.

The three films tell a continuous story set in Middle-earth 60 years before The Lord of the Rings: Fellowship of the Ring, which Peter Jackson and his filmmaking team brought to the big screen in the blockbuster trilogy that culminated with the Oscar®-winning The Lord of The Rings: The Return of The King.

The Hobbit: The Desolation of Smaug continues the adventure of the title character Bilbo Baggins as he journeys with the Wizard Gandalf and thirteen Dwarves, led by Thorin Oakenshield, on an epic quest to reclaim the Lonely Mountain and the lost Dwarf Kingdom of Erebor.

Having survived the beginning of their unexpected journey, the Company continues East, encountering along the way the skin-changer Beorn and a swarm of giant Spiders in the treacherous forest of Mirkwood. After escaping capture by the dangerous Wood-elves, the Dwarves journey to Lake-town, and finally to the Lonely Mountain itself, where they must face the greatest danger of all – a creature more terrifying than any other; one which will test not only the depth of their courage but the limits of their friendship and the wisdom of the journey itself – the Dragon Smaug.

The screenplay for The Hobbit: The Desolation of Smaug is by Fran Walsh & Philippa Boyens& Peter Jackson & Guillermo del Toro, based on the novel by J.R.R. Tolkien. Peter Jackson also produced the film, together with Carolynne Cunningham, Zane Weiner and Fran Walsh. The executive producers are Alan Horn, Toby Emmerich, Ken Kamins and Carolyn Marks Blackwood, with Philippa Boyens and Eileen Moran serving as co-producers.

The creative behind-the-scenes team is led by director of photography Andrew Lesnie, production designer Dan Hennah, conceptual designers Alan Lee and John Howe, editor Jabez Olssen, and hair and makeup designer Peter Swords King. The costumes are designed by Bob Buck, Ann Maskrey and Richard Taylor. Richard Taylor is also overseeing the design and production of armour, weapons, creatures and special makeup, which are once again being made by the award-winning Weta Workshop. Weta Digital is taking on the visual effects for the film, led by senior visual effects supervisor Joe Letteri. The visual effects supervisor is Eric Saindon, withDavid Clayton and Eric Reynolds serving as animation supervisors. The music is by Howard Shore.

Under Peter Jackson’s direction, The Hobbit: The Desolation of Smaug was shot in 3D 48 frames-per-second and will be released in High Frame Rate 3D (HFR 3D) in select theaters, other 2D and 3D formats, and IMAX®. Production took place at Peter Jackson’s own facilities in Miramar, Wellington, and on location around New Zealand. Post production took place at Park Road Post Production in Wellington.

You know, after reading that, I still don’t understand how they’re stretching this out. Or I guess I’m more confused about how they chose to split everything up. If Desolation of Smaug is going to cover the Wood-elves, spiders, Laketown and Smaug…what’s left for There and Back Again? The Battle of the Five Armies, the Necromancer, and the walk home? Feels front heavy to me. What do you think?