It's not the cosplayers' fault - it's your fault! There, that's better. 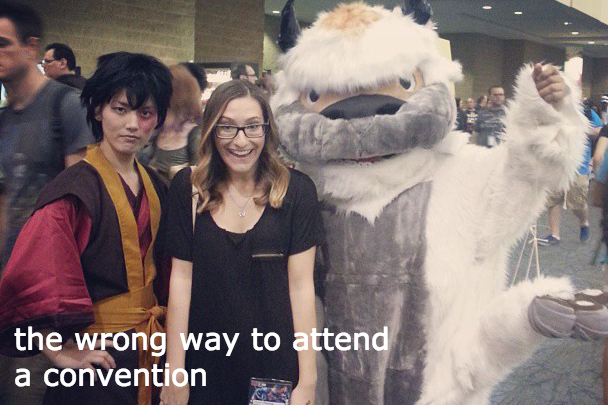 Two days ago, we told you about a blog post written by Denise Dorman (wife of famed comic artist Dave Dorman), titled “The Hidden TRUTH About Comic Book Convention Earnings: For Creators, Have Comic Book Conventions JUMPED THE SHARK?” In the piece, Dorman expressed her disappointment at flagging earnings for artists, and placed blame on the shifting focus to social and cosplay culture at cons. Now, Dorman has written a follow-up, clarifying her stance on how she feels about cosplay.

If you missed Dorman’s first post, she talks about how nearly all comic book artists have started to lose money by attending conventions, with sales dropping as con expenses rise. She says that, while she loves cosplayers, she also wonders if the expenses for con attendees is part of the reason they are no longer dropping money on creators. Dorman said,

I have slowly come realize that in this selfie-obsessed, Instagram Era, COSPLAY is the new focus of these conventions – seeing and being seen, like some giant masquerade party. Conventions are no longer shows about commerce, product launches, and celebrating the people who created this genre in the first place. I’ve seen it first-hand – the uber-famous artist who traveled all of the way from Japan, sitting at Comic-Con, drawing as no one even paid attention to him, while the cosplayers held up floor traffic and fans surround the cosplayers – rather than the famed industry household name – to pose for selfies.

The hard-working artists and creators who are the very foundation of this industry…the reason there even is an industry… those creatives who have busted their asses and spent money they perhaps didn’t have to spare in order to be there exhibiting for – and accessible to – the fans… have been reduced to being the background wallpaper against which the cosplayers pose in their selfies. At what point do you start to wonder if–other than your faithful, loyal regulars who are like family and who find you every time–the general fandom population even gives a shit about the creators more than they care about their Instagram profiles?

While we acknowledged that Dorman’s heart was clearly in the right place, her message does get a bit convoluted; it ignores the ass-busting hours that cosplayers spend creating their equally-wonderful works of art, and – as Jim Zub pointed out – it is also up to the creators to decide how to stay relevant in a changing convention culture.

Now, Dorman has written a follow-up post, “Denise Dorman Does Not Blame Cosplay for Low Convention Sales,” clarifying her initial message and noting that she doesn’t blame cosplayers for flagging creator sales at conventions; but that cosplayers are merely the most obvious and evident symptom of the wider changes occurring in convention culture.

Dorman accredits the misunderstanding of her first blog post to several different things, including her in-the-moment rage at finding out about her husband’s low con sales, and a website’s “link-bait headline.” Dorman writes that she loves cosplayers, she knows what hard work cosplay is, and that she’s a strong supporter of Cosplay Is Not Consent. Here’s what she says the crux of her original post was intended to be:

I think the emphasis on Cosplay is symptomatic of a shift in the larger Cons from being a commerce-driven event to being a social gathering-driven event. Frankly, when I see someone who prefers to pose with a no-name Slave Princess Leia and completely ignores Neal Adams, that’s when I think the creators have been reduced to background wallpaper. And that’s what breaks my heart – when I see industry giants getting completely bypassed and ignored.

It’s not the Cosplayer’s fault. They’re just being gracious and accommodating to the fans. That’s their role. It’s the new breed of attendees who are there because someone said it’s cool to be there; they are the ones completely unfamiliar with the comics industry. They are the ones who attend any hard-to-get-tickets event just to boast online. They are the people I take issue with. NOT the Cosplayers. Those are the people who care only about their selfies on their Instagram profiles. Those are the people who hijack events like #Burning Man, #Coachella and #SDCC with no understanding of why these events exist, or their raison d’être. Once they show up to the party, the event jumps the shark.

Unfortunately, while Dorman has significantly clarified that she doesn’t blame cosplayers for flagging con sales, her new point is – in my opinion – equally problematic. Blaming convention attendees who don’t know a ton about comics for the change in convention culture is pretty unfair; they’re not the ones who decided that San Diego Comic-Con would also become a major marketing tool for large television and movie corporations. That’s a business decision on the part of the convention organizers – and one that has proven, I believe, quite lucrative for them.

Additionally, I have a problem with anyone who wants to tell fans the correct way in which to be a fan, or to be a nerd or a geek or whatever you want to call yourself. Not everyone who is into geek culture is into comics, and that’s okay; conventions are becoming broader in terms of focus because they are becoming more inclusive. You should be able to have a great time at a convention if you’re a Steampunk fan, an Adventure Time fan, a hardcore Call of Duty fan, a huge anime fan, or a traditional comics fan. As more people are drawn to elements of geek culture, conventions are expanding to suit everyone’s needs – and that’s a good thing.

And conventions are a great way to introduce people to new elements of geek culture, including comic books. I’ll be honest with you: the first time I went to a big con, I was way more interested in the TV and film guests than I was any of the comic creators. I’d only read a few comic books at the time, and that was largely because I found comics pretty daunting and unwelcoming as a teenage girl. But the more I attended big cons and immersed myself in geek culture, the more I became excited about exploring comics; wandering through Artist Alley at my first Fan Expo Canada exposed me to amazing artists I’d never heard of before in my life. I picked up a great Mary Jane print by Adrian Alphona, and the very next week I jetted straight to my local comic book store to pick up the first Runaways trade. Now I’m a comic book fan for life.

Regardless of the fact that I disagree with her, Dorman says that, since her original post, she has been personally attacked on all forms of social media, and – though we know our readers already know better – we would like to remind everyone that online harassment is never okay. Dorman was hoping for honest, open discussion about how convention culture is changing, and we hope that her posts will inspire some discussion amongst creators to decide what they will do to remain relevant or to get crowds excited about their work at conventions.

Conventions are spaces filled with potential new comic fans, and I hope all creators get to experience some of that love. And to fans; don’t forget to spend some time at cons checking out new things. You might find your next awesome obsession.