More Doom and Gloom: Demonoid Domains Up for Sale | The Mary Sue

More Doom and Gloom: Demonoid Domains Up for Sale 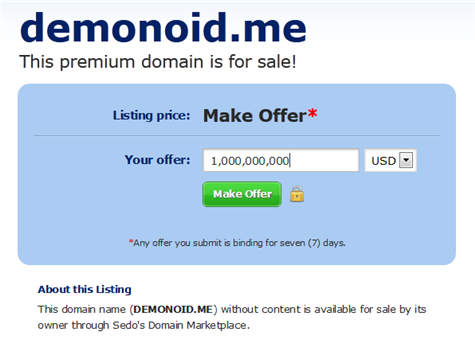 If you’re still holding out hope that Demonoid would be resurrected from the digital ashes like a magnet link that points toward fourteen RAR files of a phoenix, you may want to save that hope for something else: The three Demonoid top-level domains, Demonoid.me, Demonoid.com, and Demonoid.ph, were put up for sale on the domain marketplace Sedo.

At the time of this writing, however, I could not reproduce the page where potential buyers make offers for those domains — so either someone already bought them, or they were removed from the marketplace once word got around that they appeared for sale.

TorrentFreak pointed out that getting control of the domains while people are still checking in to see if the site will magically return would be a pretty savvy move on someone who wants to maintain some of the site’s traffic. However, that would only really work if the new buyers could provide some kind of similar service that would maintain a portion of the community.

Though the sale seems to have vanished as quickly as it was discovered, if the sites were made available, that’s another nail in the Demonoid coffin. It’s entirely possible the community can rise up somewhere else, or possibly even wrangle the domain back from whomever might’ve bought it and pick up where they left off, but that’s looking less likely with each new tidbit of news.

(story and image via TorrentFreak)