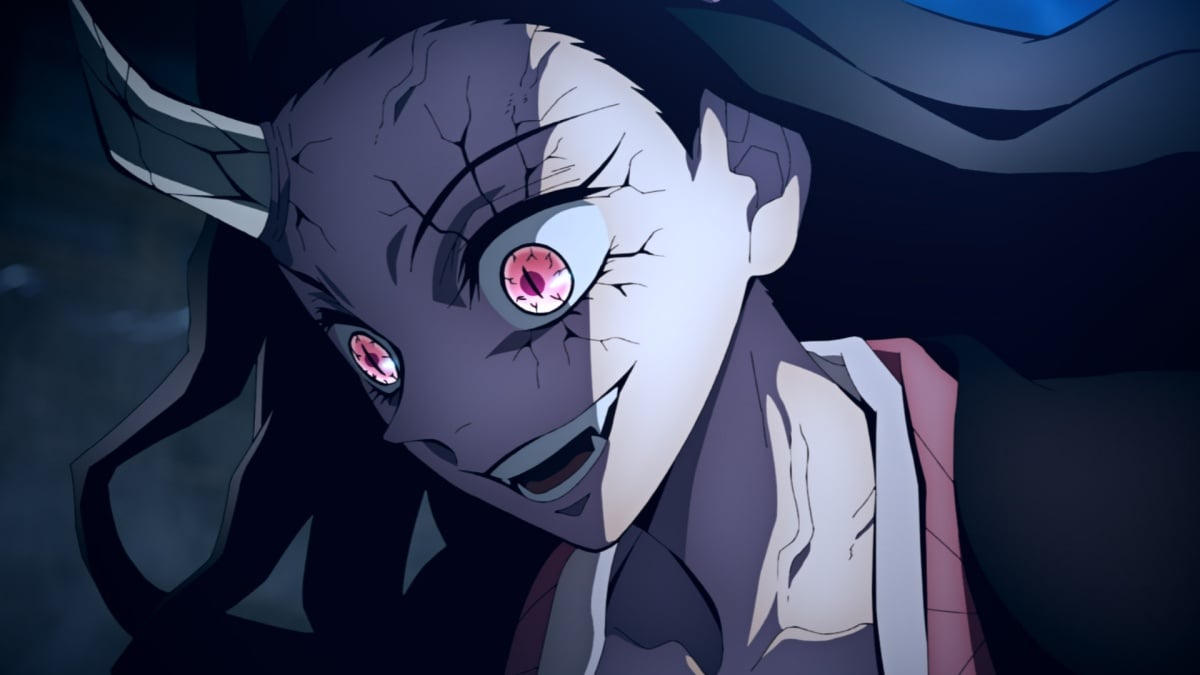 Demon Slayer is one of the best anime shows out right now, with manga sales so high it gets the attention of Western news. The story of Tanjiro Kamado, left orphaned due to a demon attack, trying to become a demon slayer and turn his younger sister, Nezuko, back into a human has grabbed the attention many, myself included. With the most recent episodes, the show has elevated Nezuko into one of the most powerful characters in the series—but her adult form is creating some discourse.

In the current arc of Demon Slayer, the characters are on a mission to the Red Light District (renamed the Entertainment District arc, due to Japanese parents being concerned). Tanjiro is with the Sound Hashira Tengen Uzui, and the good boy trio of Zenitsu and Inosuke, with Nezuko in her box for the majority of this arc.

When fighting the Upper Six demon Daki, sadly, Tanjiro found himself outmatched, but out from her box came Nezuko with a kick. She started going off against Daki and had her body severed several times. She then transformed, due to the fight, into her adult demon form and grew into … well, a busty demonic woman. That started a conversation due to Nezuko being 14 years old canonically and some feeling like this was a hyper sexualization of minors, and others feeling like the backlash was purity politics over a show for adults.

My feelings on fan service in anime have always been on a case by case basis.

While over the top and off-putting to many, I came to really love the series Kill la Kill and appreciate its narrative despite still questioning whether it needed to be as fan service-y as it was. Fire Force’s fan service concerning one character was handled in such an obnoxious, gratuitous way that I actively fast forwarded through her scenes.

I have never, personally, been upset about women having big breasts in anime if they were bad ass and not simply defined by that (Tsunade from Naruto, Rangiku Matsumoto from Bleach, and even Tengen’s wives in Demon Slayer cause all of them, including Tengen, are hot). What I do find irritating about Nezuko’s adult design is just how sort of generic and uninteresting it is.

Despite the violence, and disturbing scenes, it is also important to realize that shonen is a genre aimed at teenage boys. It’s not “for adults.” It is literally for ages 12-18. The way female characters have been underserved in the genre is part of that. Just because it translates, in the U.S., to an “R” doesn’t mean that the intended audience it’s written for is adults

Changes have been made, and we have so many badass female characters, but it still sometimes leads to moments where the character who usually looks like a twelve-year-old suddenly turns into a busty form to show she is “an adult.”

I don’t find it offensive; I find it boring. As a busty woman, I love seeing busty women kick ass, but if you are only gonna sexualize the titties, then maybe you don’t deserve them?

I just laugh at how the outfit perfectly works to show off her curves, but that it’s done in the most fashion way possible. I’d appreciate it more if it was just that, you know, her clothes don’t fit and the whole thing feels awkward, rather than her clothes falling perfectly onto her body—more Hulk, less fan service.

There is no problem with Nezuko’s adult body or adult form having large boobs. It’s just a bit boring that her body in that form exists only to look hot.

Especially when she doesn’t get to speak or be an active member of the story because she’s in the box a lot of the time. It would be really interesting if we got some more insight into how Nezuko feels about being in a child body all the time and not being able to grow up normally.

Plus, I don’t love that her having a mature, adult body also means that she is out of control. Part of the story is that being in this form, as of right now, means she out of control and bloodthirsty, and that is kind of a bummer.

People have brought up that series creator Koyoharu Gotouge has been revealed to be a woman (apparently, a Weekly Shōnen Jump employee disclosed this), and it is being used as a “gotcha” when people bring this up.

(1) Women can perpetuate sexism, (2) women can also simply just appreciate the aesthetics of big breasts, and (3) the juxtaposition of Nezuko with breasts in her adult form against her preteen form is also a design choice that makes the reveal more interesting and, therefore, that could just be the reason.

Anime fandom has always been a place where nuance goes to die, but even more so now, with Twitter, it has become a place where every disagreement has to be a moral judgement beyond measure. If you are uncomfortable with an element of fan service, you are called a prude who doesn’t get anime and can’t separate between real and fictional boobs. If you are unbothered by it, you are told that you’re comfortable sexualizing minors.

Neither of these hyperbolic statements protects anyone online. There is a lot more nuance to be had, but it gets lost because Twitter is awful and has fostered an environment where hyperbole is better for clicks.

I have been reading manga since I was a preteen. My parents, while careful, didn’t overly censor things for me. I didn’t need to learn from manga and anime how young girls can be sexualized. I learned by walking outside in a shirt that because of my own bust, adult men would see me in a hyper-sexualized way. Due to that, badass busty girls in fiction have always been my heroes.

That’s why I tend to push back when people act as though Lara Croft having big breasts made her inherently a weaker character than the more “realistic,” smaller, more athletic build (realistic to whom?) of the recent version of the character. Having curves while wearing clothes and just wanting to exist, while people want to judge you for having cleavage, is exhausting.

But while that’s true of real people, fictional characters are designed by people, whose motivations in doing so are fair to critique.

I can appreciate and enjoy Nezuko stomping a demon in her adult form, while still asking … did they need to design this transformation in the sexiest way possible? Because Nezuko isn’t real. She was drawn that way.

It means you are simply asking the question of whether this design choice was a good one, because it was a choice that was made and not made in a vacuum. I love Demon Slayer; that’s why I engage with it.

And as always, the best way to protect minors, and especially young girls, is to listen to them and to not make them feel ashamed of their bodies.

TL;DR having big boobs in anime isn’t automatically sexualization. How that design is presented and the context around it make all the difference, and Nezuko’s demon form leans a bit toward fan service for me. But that’s just my opinion.