Get In, Demon Slayer Kids, We’re Hopping On the Mugen Train With This Spoiler-Free Review! 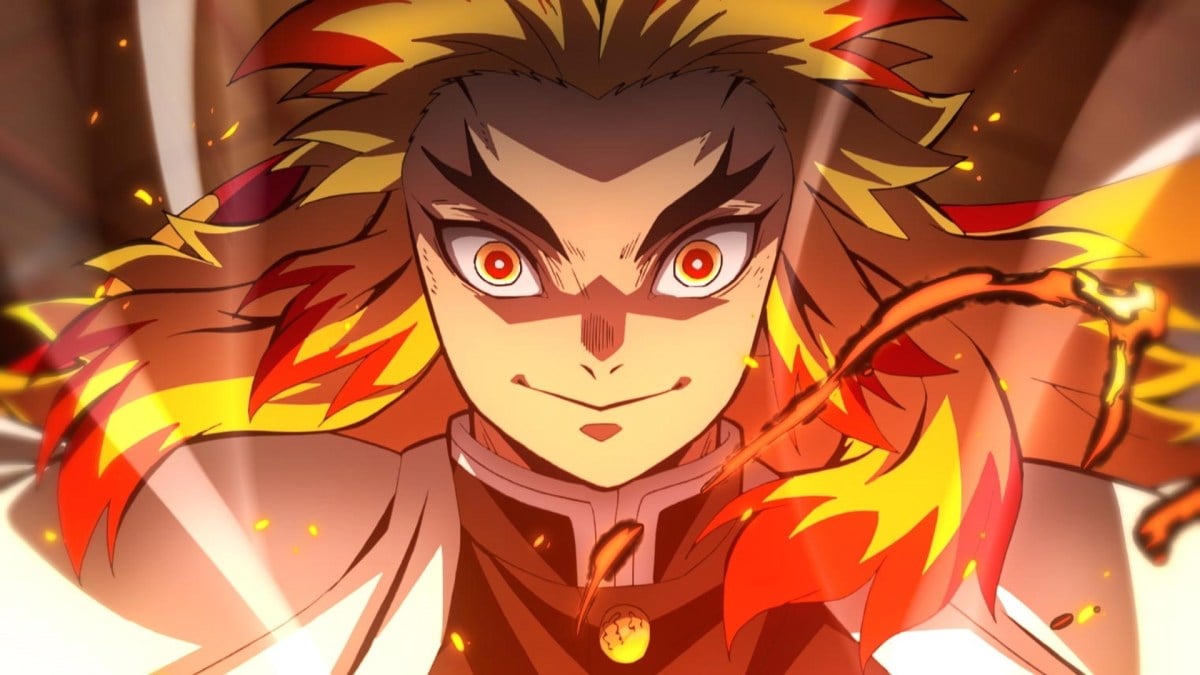 To say that Demon Slayer: Mugen Train has been highly anticipated is the very definition of an understatement. Whether you’re a fan of the series (like me) or someone who took notice when the film broke multiple film records last year, the US theatrical release is one that folks have been looking forward to. The film is set to hit theaters today, but I was fortunate enough to check it out early and, wow, this is a really good movie and a firm reminder of why Demon Slayer is such a beloved series.

Tanjiro Kamado is the type of boy who would walk your grandmother across the street, carry all of her groceries to her house, put them away, and make her a nice meal before going home to help take care of his own family – he’s the sole source of income, btw, his father having passed away, but he provides for his siblings and mother with a fresh, oven-baked cookie smile.

However, since this is a supernatural anime series with terrifyingly cool demon designs and jaw-dropping sword fights, Tanjiro goes home to discover that his entire family has been slaughtered by demons. The only family member he has left is his sister, Nezuko, but she’s been transformed into a demon. Tanjiro holds onto the hope that he can get through to his sister, and it turns out he’s right, some humanity still remaining in Nezuko. After a fateful encounter with a Demon Slayer named Giyū Tomioka, Tanjiro goes on a quest to learn what it takes to be a Demon Slayer (which, as the name implies, is someone who slays demons), find a way to cure his sister, and, of course, avenge his family. 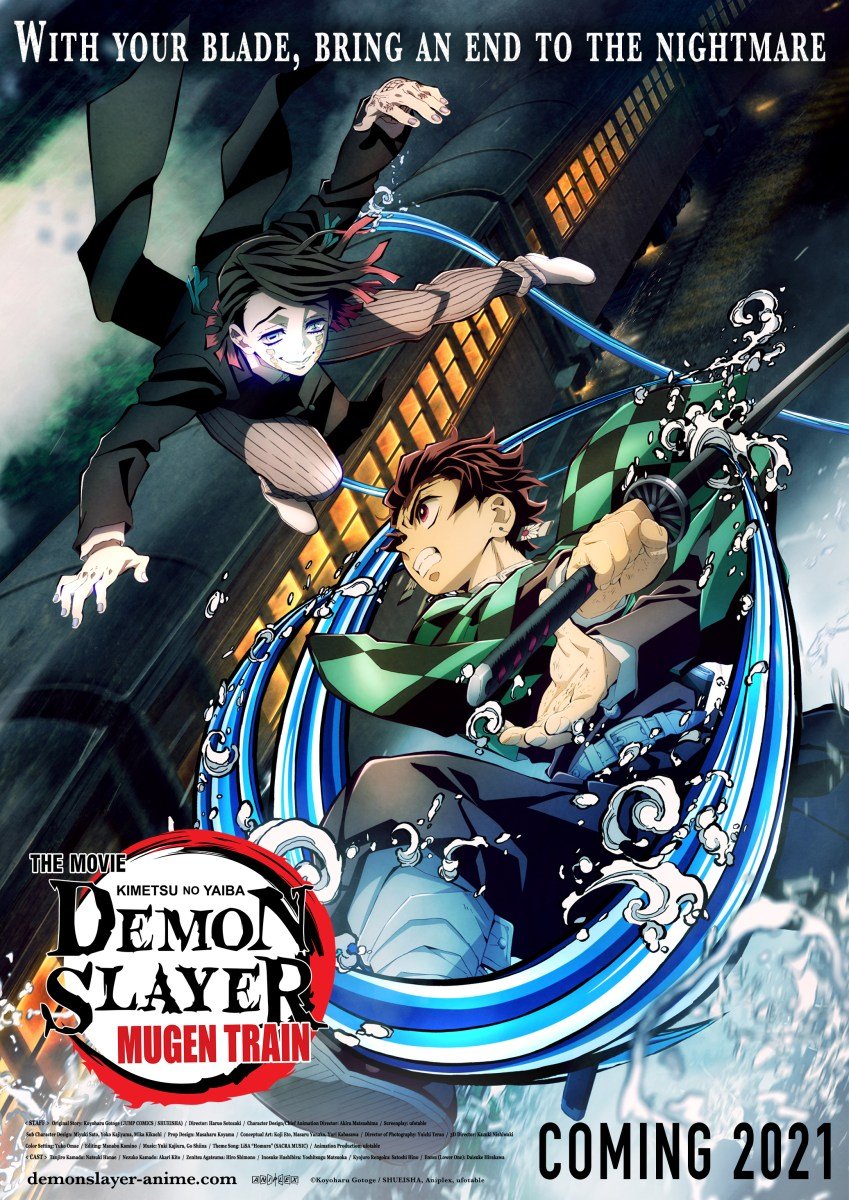 Taking place right where the first season left off, Tanjiro and his fellow Demon Slayer Corps gang of misfits board a, well, train, but word is many (including other Demon Slayers) have been killed on the train. This doesn’t sit well with the “why we gotta fight all the dang time” Zenitsu while Inosuke, fully demonstrating his lovable lack of home training, wants to fight the train. Like. The ACTUAL train itself.

The group meets up with the Flame Hashira (the Hashira are the top-ranking Demon Slayers, btw), Kyōjurō Rengoku, who is there to investigate the killings, but things immediately take a turn for the Nightmare on Elm Street when our heroes find themselves trapped inside their dreams.

But is it really a nightmare when the dream is giving you everything you’ve ever wanted? 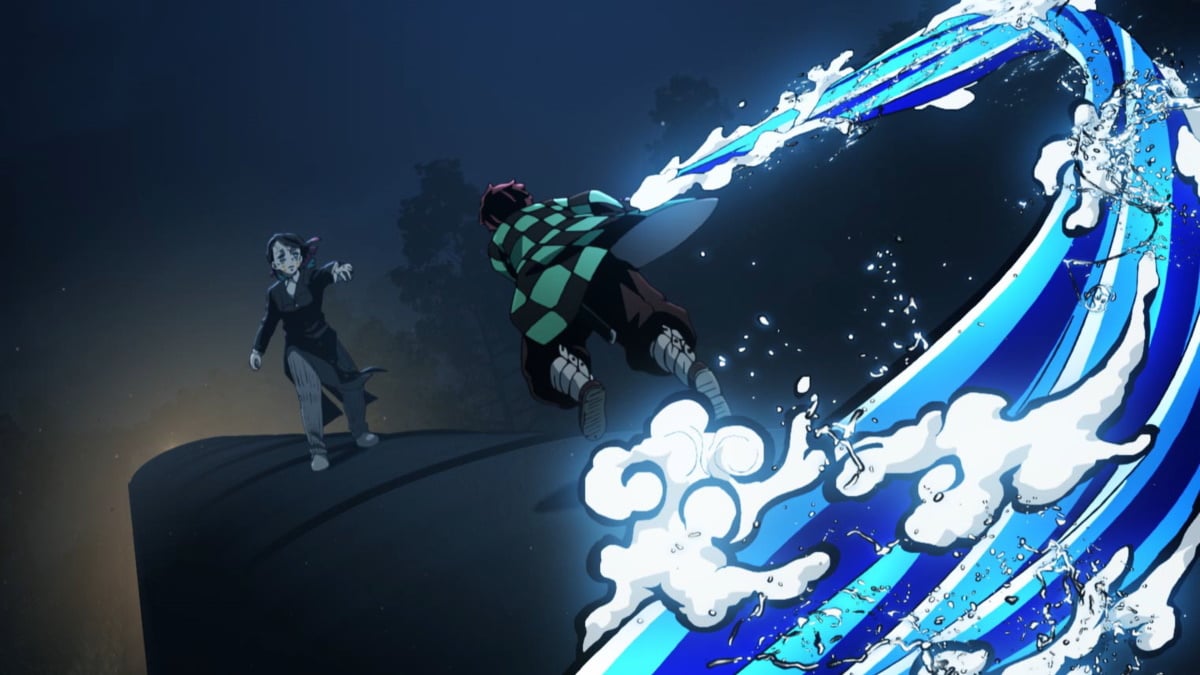 Anime movies tend to be their own thing that exists outside of the main plot (such as the two My Hero Academia movies). However, there are some exceptions where the movie is a part of the overall plot such as this year’s Sailor Moon Eternal serving as a “season four” for Sailor Moon Crystal.

This is the case with Demon Slayer: Mugen Train.

The movie is the Mugen Train manga arc, so we pretty much dive right into the story, our characters immediately on the train and connecting with Rengoku. There isn’t a whole lot of recapping going on as far as the overall plot of Tanjiro wanting to avenge his family, his training toward becoming a Demon Slayer, him meeting Zenitsu and Inosuke, and everything else that happened in the first season.

That being said, there is enough mentioned in the movie so you won’t feel completely lost if you don’t remember what happened in the first season, such as Tanjiro wanting to know more about his father and the Hinokami Kagura he once performed (which Tanjiro used in his fight against Rui).

So you don’t need to know every single detail of season one, and if there are key plot points you may have forgotten, the movie will fill in what you need to know in order to understand what’s going on.

While I haven’t read the Demon Slayer manga (yet) and have only watched the anime, after looking up this manga arc, I see why it’s a movie. It’s not a very long arc, but it is an important one, so having everything fleshed out in two hours is a good bridge from season one to the upcoming season set to premiere, hopefully, this year. All the characters are in top form, with visually stunning battle animation coupled with those sweeping musical scores that get you pumped every time a character grabs their sword. Honestly, I’m always stuck somewhere between “these attacks look like paintings I would hang on my wall” and “this battle choreography lives rent-free in my head.”

However, I still don’t know how Tanjiro manages to navigate the minefields that are Zenitsu and Inosuke, yet he does it with ease. I guess it helps that he had so many siblings to look after, the level of patience this boy has is astronomical. New to the story (kinda, he was introduced in the first season) is Kyōjurō Rengoku, who is an absolute delight. As if the character design wasn’t enough of a hint, Rengoku’s full of fiery energy drink-laced energy, which plays well against Tanjiro’s permanent state of cinnamon roll.

The comical bits are a much-needed point of fun in a movie that has a villain who grants his victims their deepest, unattainable desires. They’re also used at the appropriate times, not taking away from the weight of the story. When it’s fun, it’s fun, but when it’s time to get serious or tug at the heartstrings, Demon Slayer: Mugen Train does exactly that.

As soon as I saw the trailer that showed Tanjiro seeing his family again I knew that this movie was coming at my feelings. What makes it so painful is that he barely got any time with them in the series. They all die so quickly in the first episode that you barely get to know any of them. The movie clearly knows that, providing plenty of scenes of big brother Tanjiro with his siblings and mother. 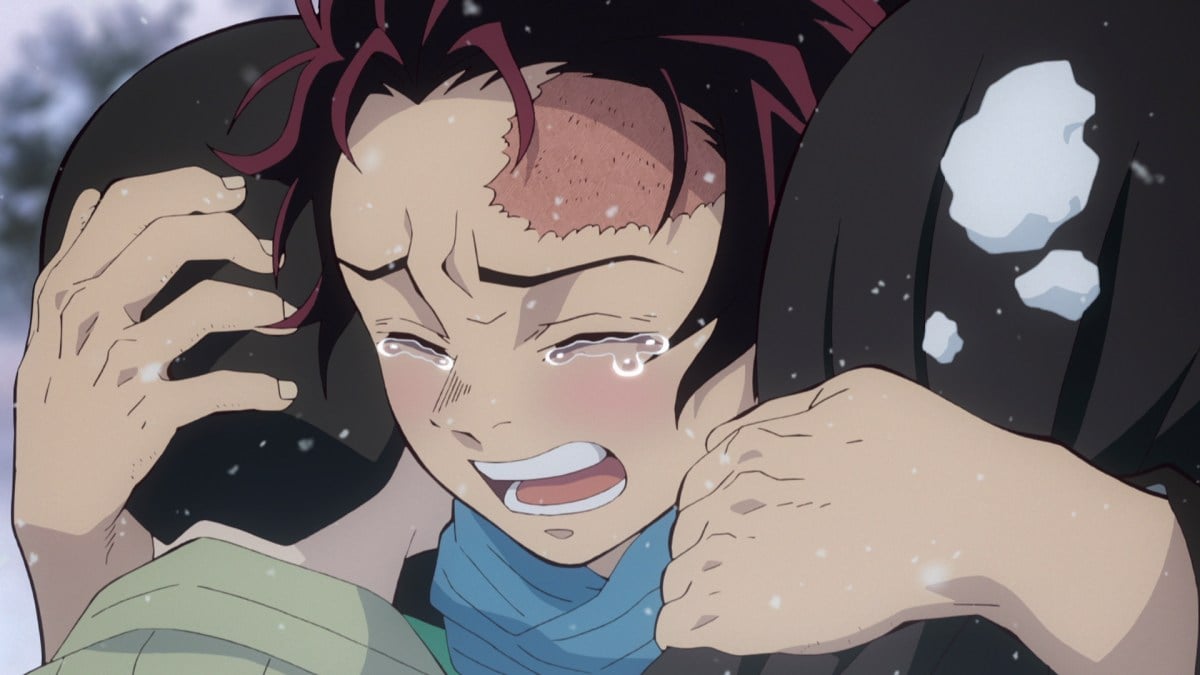 The voice acting doesn’t make it any easier, because wow, the performances for these emotional scenes are top tier.

The other great thing about this movie is that it’s a good glimpse of what we can expect in the future, ending in a way that ushers us toward the new season. There are a lot of scenes that show just how determined Tanjiro is, along with the other Demon Slayers that he’s working with. Rengoku, especially, does a great job as the “Wow, someday all the new recruits could be this impressive” character. I’m always fond of anime series where our main cast is already good, but then we meet other characters who show what they could really do if they got the proper training.

I’m not gonna mince words here. Rengoku is badass with a capital DAYUM.

Though, really, everyone is in their own way. Inosuke, Zenitsu, and Nezuko all get a chance to shine, reminding us that it’s not just Tanjiro who’s a threat.

On the flip side, we’re reminded of just how twisted these demons are. The fact that Emmu isn’t in Muzan’s Upper Ranks is frightening, especially when you see what he’s capable of. The creatures in this series continue to be a mix of intriguing and Resident Evil nightmare fuel that’ll make you hesitant about getting on a train again. I’m a big fan of how creative they are with their abilities because it gives our heroes a challenge where they have to get really clever in their battle tactics. They can’t just rush at Emmu when he can put them to sleep and control their dreams, they have to think outside the box if they’re gonna win.

Add in the fact that there are innocent passengers on the train and you’ve got yourself an intense amount of pressure to beat the demon AND protect everyone on board. 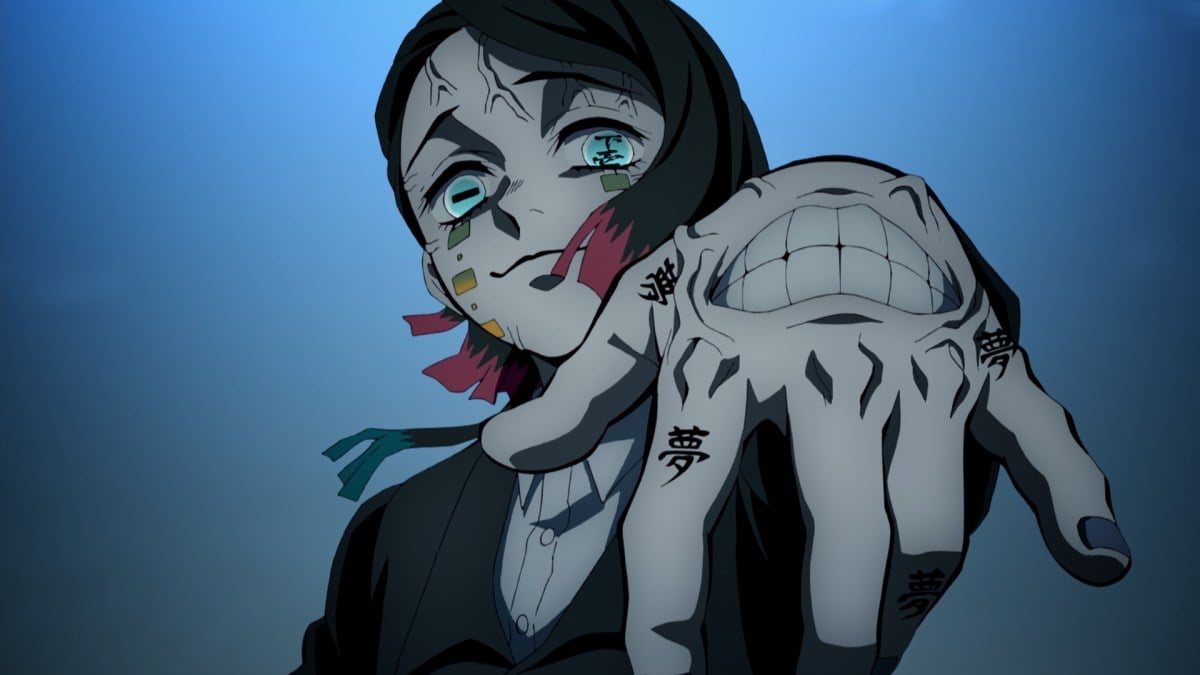 The only spoiler I’m gonna give with this review is a trigger warning. There’s mention (and scenes) of suicide in the film.

Demon Slayer: Mugen Train had a lot to live up to with all the hype from last year, but really, Demon Slayer has always had a significant amount of hype behind it. To me, this movie delivers on the action, the fun, and some heartfelt moments throughout.

I’m glad to be back on my Demon Slayer nonsense.