Mike Pence and his wife Karen attended the Colts/49ers game Sunday, but left before the game started after being *super* offended by some players’ decision to kneel during the National Anthem.

I left today's Colts game because @POTUS and I will not dignify any event that disrespects our soldiers, our Flag, or our National Anthem.

At a time when so many Americans are inspiring our nation with their courage, resolve, and resilience…

…now, more than ever, we should rally around our Flag and everything that unites us…

While everyone is entitled to their own opinions, I don’t think it’s too much to ask NFL players to respect the Flag and our National Anthem

First of all, that is too much ask. Because it’s asking players to give up their right to free speech and peaceful protest.

Translation: "I will not respect the first amendment and acknowledge the right to PEACEFUL, dignified protest"

The political theatre on display here is both over the top and totally predictable. Does anyone think Mike Pence didn’t go to this game for the sole purpose of leaving and tweeting about? There’s no way he didn’t know players would kneel, meaning he went through all this just to feign shock and outrage.

An ugly, despicable PR stunt by the Vice President of the United States.

Mike Pence has orchestrated a controlled indignation. An inside outrage job.

Trump came out and proudly admitted that yes, it was planned. By him.

I asked @VP Pence to leave stadium if any players kneeled, disrespecting our country. I am proud of him and @SecondLady Karen.

In addition to being a disgusting, disingenuous publicity stunt, it was also a total waste of resources. Because this isn’t just some guy going to a football game. When the Vice President goes to a football game, a lot of effort and taxpayers’ money goes into that.

How much did it cost to send Pence to Indianapolis for 8 minutes of an NFL game?

Confirmed: Mike Pence diverted from his west coast swing just to attend the game in Indianapolis, which his staffer admitted in advance he was planning to walk out of all along. Now Trump admits he told Pence to do it. These guys are two dicks with no balls.

Pence was at an event in Nevada, he flew all the way to Indianapolis just for this game so he could walk out of it, and now he's headed back west for an event in California.

Perhaps the most upsetting part of this is that Pence and Trump are choosing to perpetuate the false narrative that these players’ protests have anything at all to do with the flag or the military. They are protesting police brutality and the murder of black Americans. Pence seems smart enough to understand that. Trump believes whatever Fox News tells him, so maybe he really does think this is somehow about the troops. Even if he does believe it, that doesn’t make it true. It makes him willfully ignorant.

The kneeling is about protesting police brutality. YOU made it about disrespecting the flag. That is how racism works.

Mike Pence knows that kneeling isn’t about the flag, the military, or the national anthem. He *knows* it’s about BLM.

Also, it’s a small point compared to the attempt to paint football players as unpatriotic villains while redirecting conversations away from police profiling and brutality, but can we please take a moment to acknowledge that the Pences couldn’t even be bothered to take a new selfie? They just slapped a filter on this one from 2014. 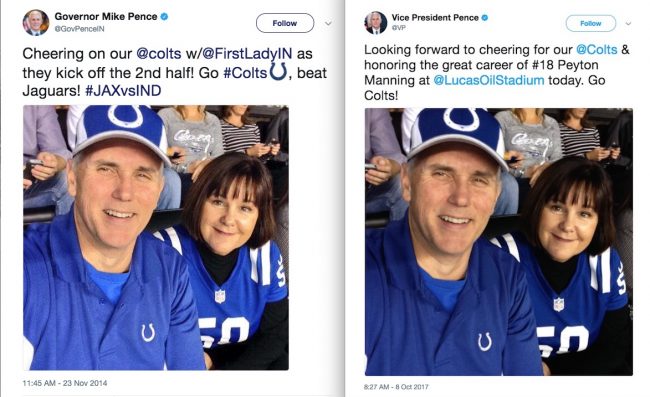 What a load of fake news.

To be fair, I think Mike Pence leaving anything is a great way to respect the flag.