Spirited Defense of Star Trek: The Next Generation's Deanna Troi | The Mary Sue

A Spirited Defense of Star Trek: The Next Generation’s Deanna Troi 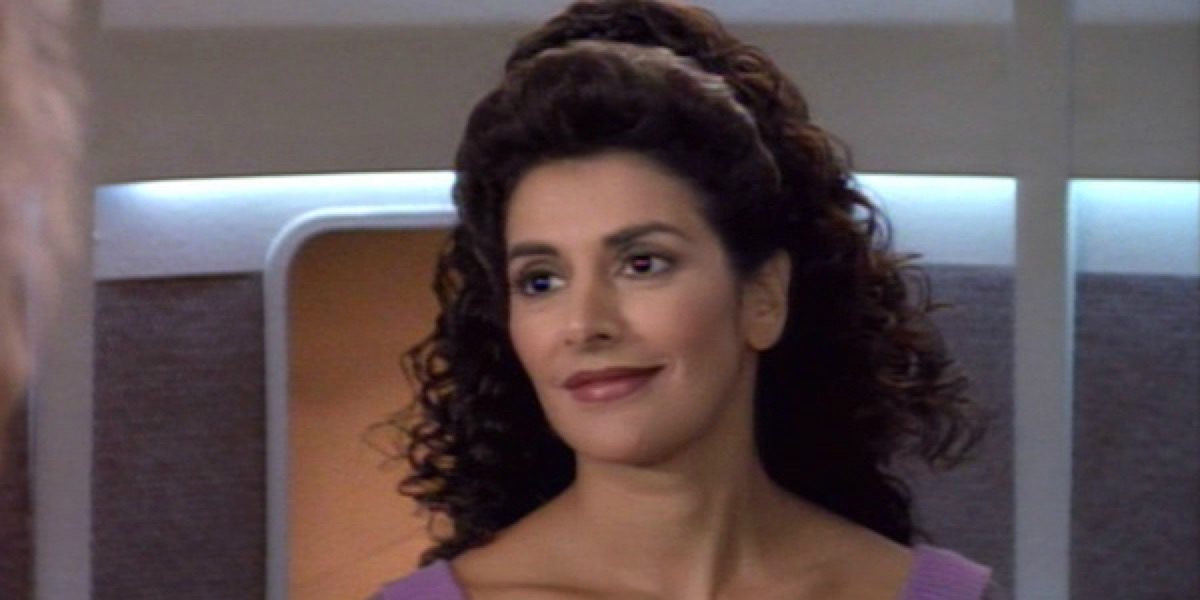 When I was a little girl, watching Star Trek: The Next Generation reruns with my father, Deanna Troi was my favorite character because she was very pretty and very kind—like a princess … IN SPACE! That’s sometimes all it takes for little girls. As I grew up into a fully fledged nerd, I continued to think Troi was the coolest, but I found out that an awful lot of people disagreed with me incredibly passionately on the topic.

Troi is one of those untimely characters that has the misfortune to be critiqued by both feminists and anti-feminists alike for being “girly, weak, and useless” on one hand, and being “oversexualized, underwritten, and problematic” on the other.

A lot of these critiques are valid. Troi was originally envisioned by Star Trek creator Gene Rodenberry as having three or four breasts. Thankfully he was stopped by longtime Trek writer and SAVIOR DC Fontana, who pointed out that’s (a) not sexy, and (b) how are you going to arrange those? (c) Stop. In her words (from Gene Roddenberry: The Myth and the Man Behind Star Trek):

I honestly believe you will offend most women, and maybe a lot of men with this character. Besides, how are you going to arrange those four provocatively shaped breasts? Four in a row? They had better be small. Two banks of two? Do you know how much trouble women have with the normal number—keeping them out of the way of things, I mean. Four straight up and down? Don’t be silly.

Being saved from this terrible—and I cannot stress this enough—terrible idea did not save Troi from being relegated to the “eye-candy” of the show. Marina Sirtis was forced into clinging, low-neckline non-uniform outfits, corsets, and what she called “the industrial-strength, Starfleet-regulation brassiere,” which she expressed some magnificently shady dissatisfaction with later (from The Fifty-Year Mission: The Next 25 Years: From The Next Generation to J. J. Abrams: The Complete, Uncensored, and Unauthorized Oral History of Star Trek):

Unfortunately, what happens if the girls have cleavage, they cannot have a brain because the two don’t go together. So when I got the gray space suit and got cleavage, all my gray matter departed. That was a shame, because originally Troi was not supposed to be the chick on the show. Gene said she was intended to be the brains of the Enterprise, which you would never know from watching it. She was supposed to have equal the intelligence of Spock.

So when the cleavage came, all that left, and I became decorative, like a potted palm on the bridge.

Many writers confessed that they found Troi’s character and empathic powers “too difficult” to work with and often wrote her out of scenes and episodes, despite admitting that Sirtis had the range as an actress to do much more. When she did get her own episodes, they mainly revolved around skeezy love interests, rape metaphors, or cursed forced-alien-pregancy plot lines. 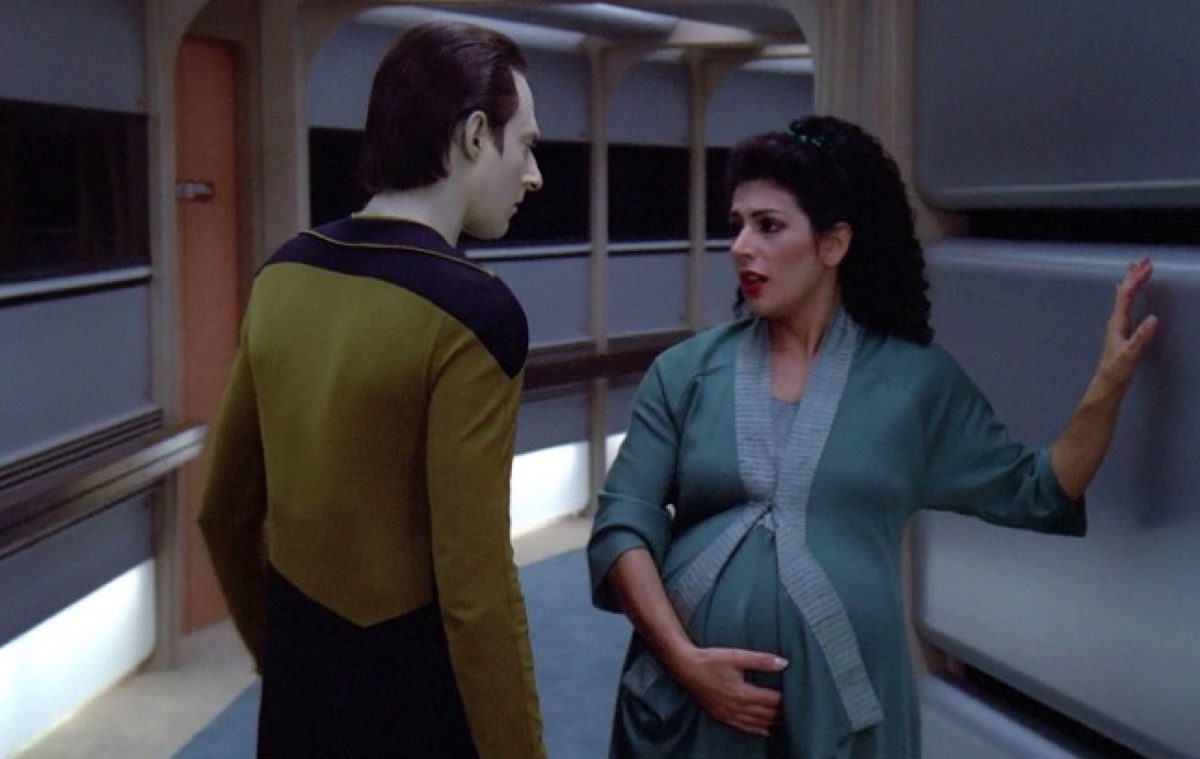 “Yikes” is the word. Despite all that, I refused to let my love for Troi go. Women, people of color, and other marginalized fans of Star Trek often get used to watching the show through a kind of double vision—appreciating its attempts at depicting a better, bolder future while also painfully aware of the many sexist, racist, and homophobic hurdles it trips over along the way, appreciating where they tried instead of where they failed.

There’s also a tendency in fandom, which I approve of immensely: the “my city now” approach, where you grab what you love from canon in your little goblin hands and you protect it, polish it off, and show off to the world the beautiful thing you saw inside it.

One thing that Rodenberry was very sure about was that the future was going to be very sexy—sometimes too sexy. (FOUR BREASTS?) Troi is a wonderful example of what functional sex positivity could look like. She followed her heart where it led her romantically, without shame, and encouraged her friends to do the same. She navigated awkward situations with grace and tact, like when Ro Laren banged Riker when they had no memories. Even though Troi wanted to bang Riker with no memories, she was like, “Fair’s fair,” and then when they got their memories back, she sought out Ro to make sure she was all good and gently bully Riker together.

Or when her friend, Beverly Crusher, was dating a Trill who was transferred into Riker’s body, and she wanted to know if it was against the girl code to tap that, Troi was like, “Go for it.” These are difficult situations that even the most complex of polycules does not yet have to deal with, and she was always kind, considerate, and emotionally mature.

And what was the deal with her and Riker? They were in love, but they weren’t together except when they were. They acknowledged their feelings for each other, and that the timing wasn’t right yet, and continued to hang out together and respect and support each other—almost dating, almost not—until they were ready to put a ring on it. How quietly lovely. Imzadi, baby.

Just look at Troi explaining the proper way to appreciate a chocolate sundae and tell me that she is not an expert at creating small pleasures and taking time for some self care. Troi is the absolutely the only person on the Enterprise I can picture taking a bubble bath just for herself. I can absolutely picture, however, every single other character taking a bubble bath because Troi told them to. Picture that: Worf sitting angrily in a bubble bath, Picard in a bubble bath with some soothing flute music, Data in a bubble bath … He’s not sure what’s supposed to happen now, but he’s probably brought a duck.

And she’s qualified to give that advice because she is a Mental Health Professional. When TNG first premiered, the fact that Troi was a therapist and that there was an onboard counsellor was one of the most mocked aspects of the show. “Ooh, how touchy-feely ’80s,” they said, like fools. Her profession is actually one of the aspects of her character that’s aged best over time. Working in space is incredibly stressful, especially if you work in Star Trek Space, where you’re as likely to be blown into the unforgiving vacuum as killed by a suspiciously rubber-looking lizardman. A therapist now seems like an innately sensible, if not crucial, person to have aboard. 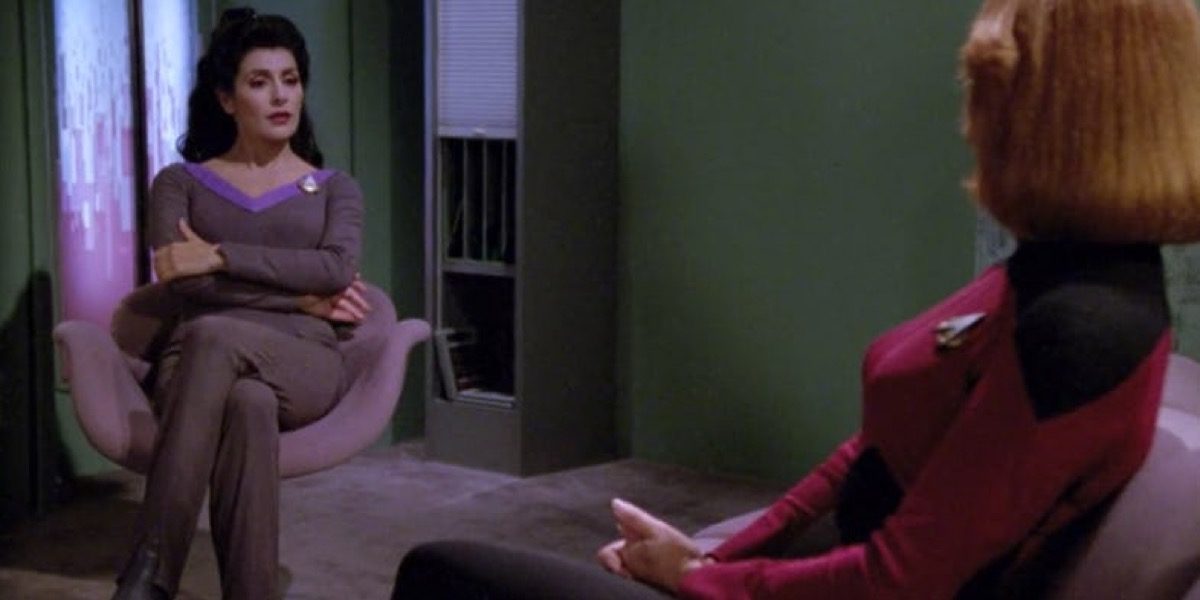 I mean, look at CBS’s ongoing Star Trek: Discovery, then back to TNG (now back to Discovery, then back to TNG). Everyone on Discovery is miserable, going through Some Stuff, or about to freaking crack, and most are all three at once. They should be so lucky as to have Deanna Troi show up and point out that Hugh needs time to recover from the traumatic experience of being dead for like a year, tenderly tell Michael not everything is her fault, and let Tilly know it’s okay to relax sometimes.

Some say that TNG is conflict-free and “beige” compared to other Star Treks, but maybe that’s just because they were the only crew to have a competent mental health professional on the bridge. The two most consistent emotional arcs on TNG were Picard’s need to let his hair down (oof) and Data’s lifelong quest to be a real boy. Both of these throughlines Troi identified and kept a keen eye on, joyfully encouraging them on their journeys.

Not only that, but as a counselor doing respected and necessary work on a spaceship, Troi proved that the humanities do have a place in space, which is very comforting for some us who are scared of math but love the stars.

Troi is not a Goddess of Empathy (though becoming Barclay’s longterm therapist and friend, after seeing that, should nominate her for a minor sainthood at least). She is KIND. She is endlessly kind, patient, and caring for those around her. Partially, this is due to her empathy, but it’s also just who she is as a person—Lwaxana (equally, if differently, iconic) proves it is not inherent to her Betazoid ancestry.

She’s friendly, and friends with, a huge range of people on the ship. She’s one of Picard’s few emotional confidants, she cracked Tasha Yar’s icy walls, and she’s got hours to spend helping Data and his weird robot baby pick its identity. Sirtis herself appreciated this trait in Deanna (from Star Trek: Communicator issue 102): “To me, Troi was the nicest person aboard the Enterprise, because, instead of being wacky and zany, she was always understanding and sympathetic towards people.”

Professionally lovely person LeVar Burton said (from SFX: The A-Z of Star Trek), “Troi is the soul and the conscience on the Enterprise.”

Troi can be badass when the occasion calls for it. She can command the bridge when disaster strikes, she’s a handy gunslinger to have around in a western, and her undercover Romulan exploits are incredible.

But most of the time, she’s just sensitive, sensuous, and kind. Those are quite girly traits to have. Maybe that’s why so many people hate her, but just because those traits are “girly” doesn’t mean they’re inherently bad. Most of them are unquestionably positive, even if we may question the motives of some of the people behind the scenes who made her that way.

Female characters don’t always have to be angry, strong, and “badass.” (Though I love them, too. Kira Nerys, call me.) Sometimes it’s nice to see a compassionate, warm, touchy-feely, humanities-degree-having, chocolate-loving woman is allowed to go to space, too. 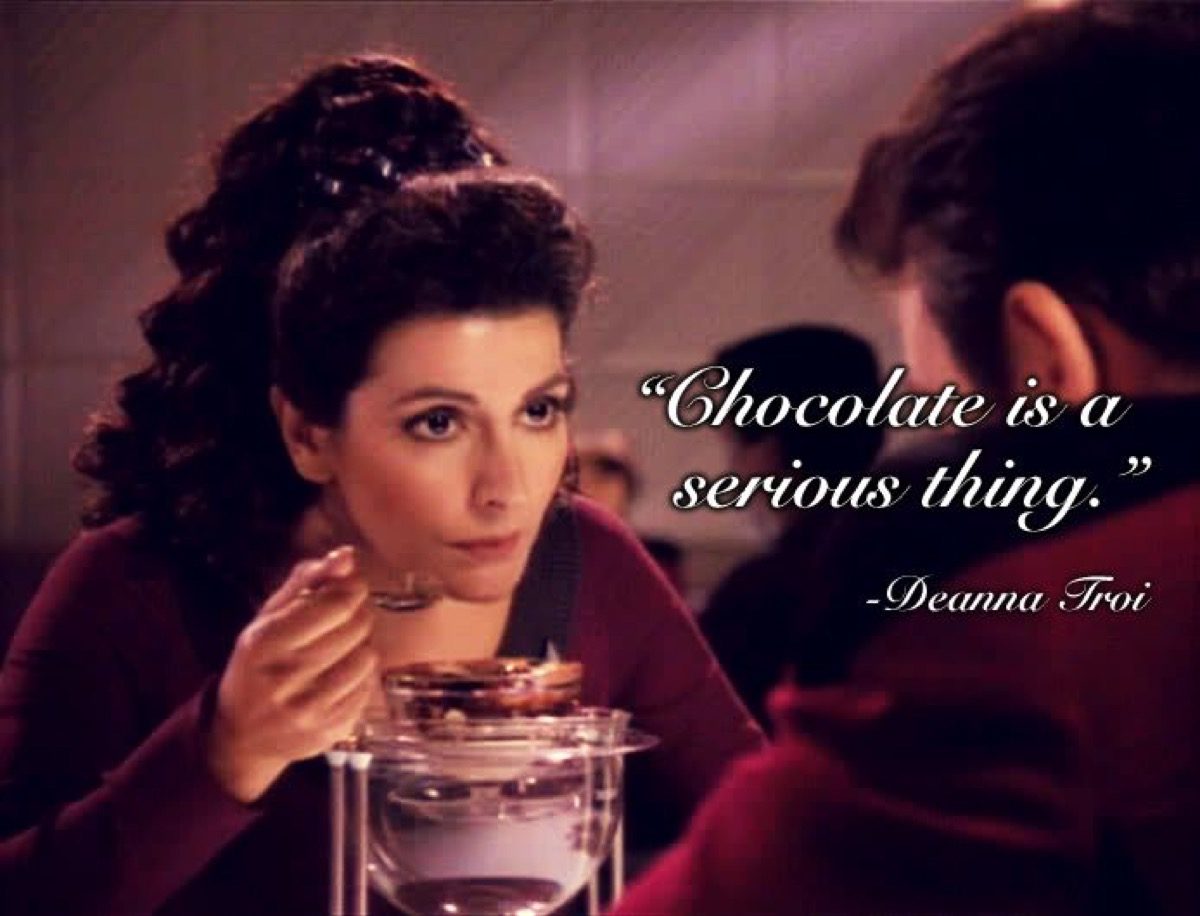 And her looks? Iconic.

Bonnie is a writer and journalist who lives in Tasmania, a tiny island at the bottom of the world. She has a BA in Ancient History, History, and Linguistics, a Master’s in Journalism, Media, and Communications, and a life long obsession with whales that can be traced back to StarTrek IV: The Voyage Home.

contributorStar Trek: The Next Generation