Deep-Sea Ecologist Rewatches seaQuest DSV: Episodes 1 & 2, “To Be or Not to Be”

There’s something we need to address before I can even begin revisiting seaQuest DSV, otherwise it will consume this entire 3-season rewatch: There are no beards on submarines. Even the most hirsute scientists working on DSV Alvin are forced to shave their face sweaters before the dive. Why the ban? Submersibles, even research submersibles with peaceful missions, face extreme danger. In a crisis, all personnel need to be able to rapidly don emergency respirators. Facial hair prevents a complete seal. The beard must go.

That, incidentally, is one of several reasons why I prefer robots for deep-sea research.

seaQuest DSV ran from 1993 to 1996. Billed as Star Trek-but-underwater, seaQuest envisioned a future of ocean exploration and colonization, with underwater farms, long endurance deep-diving submarines, and subsea warfare. Produced by Steven Spielberg and with legendary oceanographer Robert Ballard serving as science advisor, it was notable for being fairly well-grounded in the best available science of the day, for the most part.

seaQuest DSV is over twenty years old, but its biggest milestone is still two years away: the show was set in the far flung future of 2018 (the pilot, which begins 13 months earlier, happens sometime at the end of this year).

So how well does the only big budget underwater drama hold up?

In episodes 1 & 2, “To Be or Not to Be,” the pilot two-parter sees battle-hardened Captain Marilyn Stark relieved of duty for disobeying orders from the United Earth Oceans Organization. seaQuest (vessel names are traditionally italicized) goes into a 13-month drydock while the UEO searches for a new captain. Their unwilling recruit, Captain Nathan Bridger, is tricked into coming aboard, along with his talking dolphin, Darwin. After meeting the crew, including the Wesley-Crusher-esque boy genius, Lucas Wolenczak, and a fog-hologram moral-guidance AI thing, Bridger is given the hard sell—persuasion by outright kidnapping. The seaQuest is attacked by a rogue submarine piloted by Stark, and Bridger, as the ranking officer who is also a hostage, is forced to assume command.

Let me just say that this is by far the worst way to pick a captain for an endurance mission. Submarine crews undergo extensive medical and psychological screenings before being deemed fit for duty. They also have a chance to get their surface lives in order before going on long deployments. Bridger, on the other hand, wants nothing to do with the sub and was essentially press-ganged into service, 18th century British admiralty-style. Beyond the obvious question of why anyone would want to be led by a deeply reluctant captain, how exactly does a captain command the respect of their crew when they are essentially hostages?

So let’s talk about seaQuest, the submersible. In this episode, it reached a depth of 22,000 feet (about 6,700 meters). While we’ve built submarines that can go deeper, like Deepsea Challenger and Trieste II, they are small crafts that carry one or two people. Research subs, like DSV Shinkai 6500, can reach 6,500 meters but still only carry 3 passengers in a titanium pressure sphere. seaQuest is huge, with a crew of over 200, and tubular rather than spherical.

The closest we’ve ever come to a seaQuest-type submersible is the NR-1, affectionately named Nerwin. The smallest nuclear sub ever built, Nerwin could carry 13 people to a depth of almost 1,000 meters and stay down for over a month. Nerwin was instrumental in finding pieces of the space shuttle Challenger. Ballard himself used it to find the HMHS Britannic. The submarine was decommissioned in 2008. 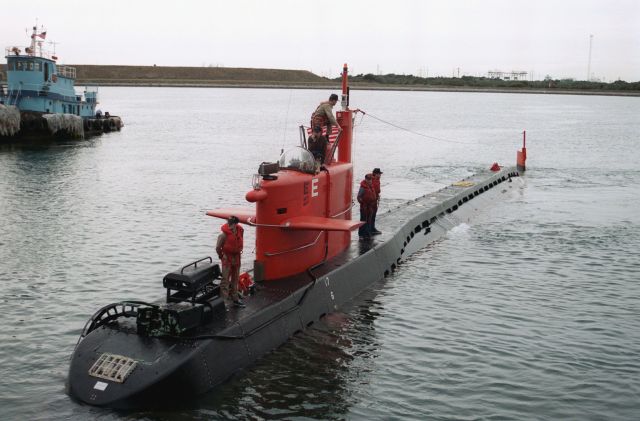 seaQuest is huge, and I have questions, not the least of which being: What’s up with the dolphin tubes? The submarine has a network of water filled tubes so that their talking dolphin, Darwin (also kidnapped, in clear violation of CITES and the Marine Mammal Protection Act), can travel anywhere on the ship. Are these tubes pressurized? Would all that water sloshing back and forth wreak havoc with buoyancy compensation? Why do they need a dolphin inside the submarine, anyway?

So let’s talk about dolphins. First off, it’s actually pretty easy to talk to a dolphin; the real challenge is getting the dolphin to talk back. seaQuest has solved this problem with a handwave-y communicator, the vo-corder, that allows the crew to ask Darwin simple questions. Fine. It’s unlikely that real dolphins will have much to say, and even if we could get them talking, the resulting conversation might be enough to make John Waters blush. As a plot device, it’s not completely unreasonable, and at least they didn’t make the dolphin psychic (cod save me from the telepathic dolphin people).

Dolphins do have sophisticated social structures and appear to have rudimentary language. Some research even suggests that individual dolphins have unique names. The U.S. Navy does maintain a military dolphin program, and a lot of the behaviors that Darwin demonstrates can be accomplished by well-trained Navy dolphins. Darwin, however, was not a real dolphin, but a set of very good animatronics that the show made a point not to brag about, lest they break the illusion. On that, seaQuest DSV is in very good company. The humpback whales of Star Trek IV: The One With Whales were also animatronic.

seaQuest DSV does get a lot of science details right. The homesteading colony uses hydrothermal vents for energy—there are several current proposals to do this exact thing—and deep-sea mining, an industry which, after several decades of false starts, is about to become a reality, features heavily in the constant warfare between various underwater confederacies. And yet, for all they get right, there’s still an awful lot of beards on submarines.

Andrew Thaler is a deep-sea ecologist and conservation biologist who runs the marine science and conservation blog Southern Fried Science. You can support his various and sundry ocean outreach projects (like this one) on Patreon, check out his maritime-y science fictions novels, or just follow him on Twitter.