Another short hiatus, another trio of reviews! Let’s get to it.

Episode 14: “Better Than Martians.” In the seaQuest universe, we went to Mars. That’s not really outside the realm of possibility. We have most of the technology that can get us there, now, and several groups are working on mission to Mars to launch in the next decade. On that front, seaQuest is only off by a handful of years. Not bad for the breathless optimism of the early 1990s.

The Wayfarer crew, on their triumphant return from the first crewed mission to Mars, crashes down in hostile water. It’s up to the seaQuest to rescue them, but Captain Bridger is foiled by a rogue general who wants the glory of rescuing the crew first. But Wayfarer isn’t just carrying a slowly sinking crew, it also has precious samples of a prehistoric Earth snail that already has a scientific name. Yet again, I have to wonder why no one seems to be anywhere near as excited about this as they should. If the Curiosity rover came back with even the most rudimentary precursors to RNA, science Twitter would basically go ballistic. But these folks act like finding a complex, multicellular organism that has a terrestrial evolutionary history is a consolation prize. If these aren’t the worst scientists in the world, they’re certainly the most jaded.

While the political intrigue and the race against time is dramatic, let’s get straight to what you really want to know: is there really a deep rivalry between submariners and astronauts?

Well, in a manner of speaking. 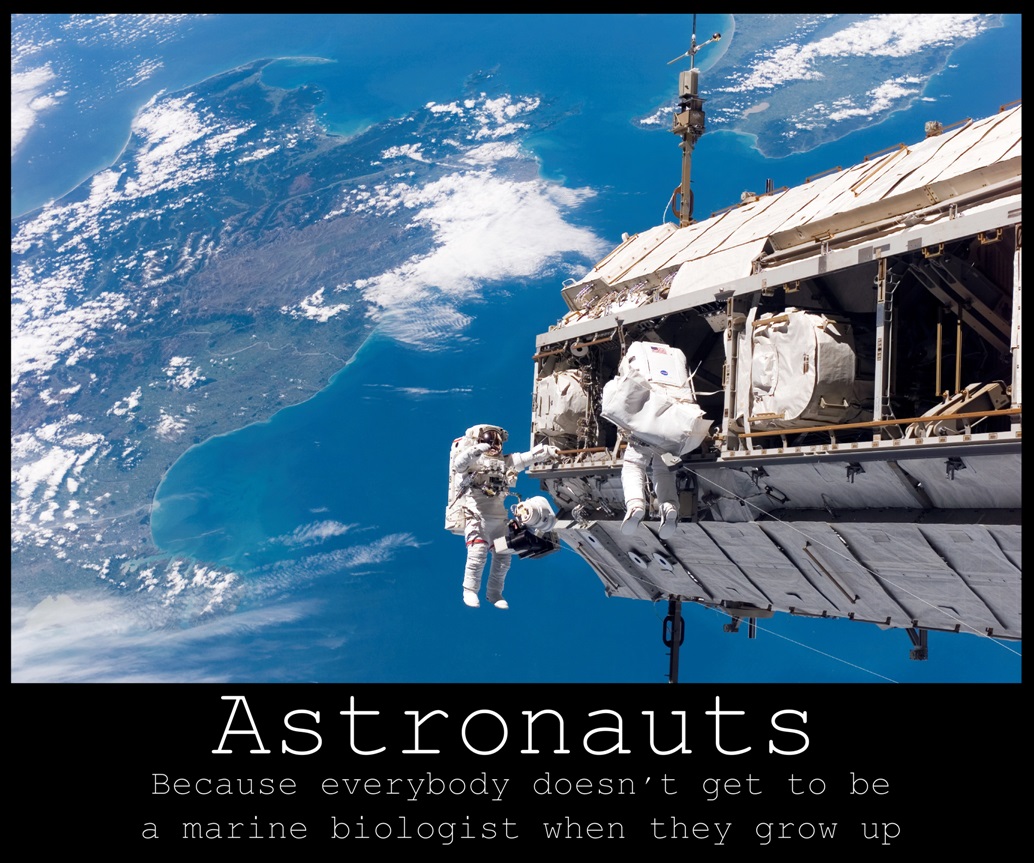 Compared to oceanographic research, NASA has an enormous budget. One year of NASA’s funding could fund the National Oceanographic and Atmospheric Administration (who managed the United States’ research fleet and fund much our our ocean research) for 132 years. Marine scientists have even put out a call to create a “NASA for the ocean.” But it’s not really a zero-sum game. Some NASA funding goes into ocean research (and, for that matter, NOAA funding goes towards monitoring things like sunspot activity and putting satellites into orbit).

Marine biologists, particularly deep-sea ecologists, actually collaborate quite a bit, particularly with astrobiologists. Often deep-sea expeditions have joint funding from NASA. Deep-sea ecosystems, particularly places like hydrothermal vents and methane seeps, are the closest we can get to alien life on Earth. So far, we only know of one world that supports life. In order to understand how life could evolve elsewhere in the universe, we have to look for the most extreme and most bizarre ecosystems on our own planet.

It works the other way, too. Astronauts do a great deal of their zero-gravity training underwater, to simulate weightlessness. The Aquarius Reefbase, an underwater research habitat, is frequently occupied by astronauts in training, as they learn to work in enclosed environments with major physiological restrictions. So, just like on seaQuest, there is a bit of a healthy, friendly, competitive rivalry.

But seriously, there’s an actual Martian snail, and no one seems to care.

Episode 15: “Nothing but the Truth.” A terrorist captures the seaQuest, taking some of the crew hostage. Their goal, to use seaQuest’s warheads to force the world’s governments to shut down all sources of pollution. There’s some clever bit with Stacy Haiduk’s character never lying to the terrorists. This is a bottle episode, with few characters all acting within the confines of the seaQuest. It’s a fine bit of TV drama, but it’s pretty light on the science, so there isn’t a whole lot for me to get into.

But wow, between this episode and “The Regulator,” the seaQuest production team really has a pretty grim view of environmental activism. To a person, the most passionate environmentalists in this show all turn out to be either hypocrites or fundamentalists, and all tend to go straight for the violence option. It’s like Star Trek’s tendency to make every Admiral a corrupt bureaucrat.

The early 1990s were the heyday of a lot of the more radical factions within the environmental movement, with groups like Sea Shepherd breaking onto the public scene with largely ineffective, often dangerous, stunts to protest whaling and seal hunting, while the Animal Liberation Front and Environmental Liberation Front were perfecting some very visible, very illegal approaches to protest. So maybe we can forgive the producers for projecting these trends into the near future, and assuming greater radicalism and much more violent approaches to activism. But damn if every character that takes an environmental stand doesn’t turn out to be a cutthroat by the beginning of the third act.

Fortunately, though those elements still exist with environmentalism, the movement as a whole has matured, with greater involvement directly in the political process and a push for science-based management regimes that work towards cooperative, rather than confrontational solutions. Entire disciplines, like conservative biology and conservation genetics have emerged to provide a robust, evidence-based framework for environmental policy. Of course, it’s not all roses, but we at least lie somewhere between seaQuest’s radicalized view of the movement’s future and the overly optimistic vision of some other environmental utopias.

Episode 16: “Greed for a Pirate’s Dream.” Magma buoys are not real things. Magma doesn’t work that way. But it’s okay, because this episode features my favorite cantankerous fictional scientist: the geologist Dr. Raleigh Young, who just wants to get his damn magma science done and every time he’s stuck with the seaQuest, a dozen things go wrong. There are ships within the US research fleet that have similar reputations (some deserved, some not), and we go out of our way to avoid using those ships whenever possible. I feel your pain Dr. Young.

The magma buoy pops up on an island occupied by a team of rogue treasure hunters about the make the score of a lifetime. Paranoid, they think the buoy is a military probe. Meanwhile, seaQuest knows a volcano on the island is about to blow, and they have to get these paranoid pirates out of there. Island hijinx ensure.

Magma buoys may not be real, but oceanographic equipment does, occasionally walk away. In extreme cases, wannabe pirates have taken oceanographic moorings hostage and held them for ransom while Pokemon Go trainers keep walking off with rather familiar looking drifters. We’ve seen lost gear show up decades later, washed up halfway around the world. In one infamous incident, a researcher liberated tracking beacons from tagged animals, only to forget that they were continuously updating. Baffled scientists watched their carefully tagged animals migrate down the highway and into their arch-rival’s garage.

But seriously, magma buoys? That’s not how any of this works.

Andrew Thaler is a deep-sea ecologist and conservation biologist who runs the marine science and conservation blog Southern Fried Science. You can support his various and sundry ocean outreach projects on Patreon or check out his maritime-y science fiction novels. Follow him on Twitter, where he’s happy to answer question about deep sea ecology and exploration.