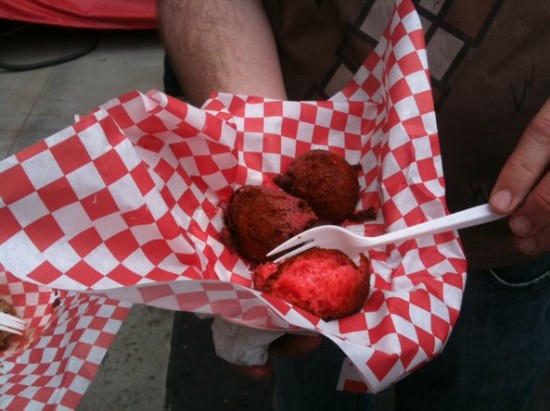 You’re looking at deep-fried Kool-Aid, the latest and greatest creation from deep-frying legend Charlie Boghosian of Chicken Charlie. From Sing On San Diego:

Chicken Charlie’s is a staple of fried rations at fairs across the country. It sold 400 to 600 orders of deep-fried Kool-Aid per day the first weekend of the San Diego County Fair. That’s about double the rate of previous debut items, Boghosian said.

According to Boghosian’s count, some 150 pounds of this new confection were consumed this past weekend during its debut this past weekend. Hopefully Chicken Charlie will be taking these on the road soon. They must be shared with the world.

(Sign On San Diego via Neatorama, image via Jonathon Horn)