Donald Trump Wants to Decriminalize Homosexuality Worldwide but He’s Still No Ally, Not Even Close

This is more anti-Muslim than pro-LGBTQ+. 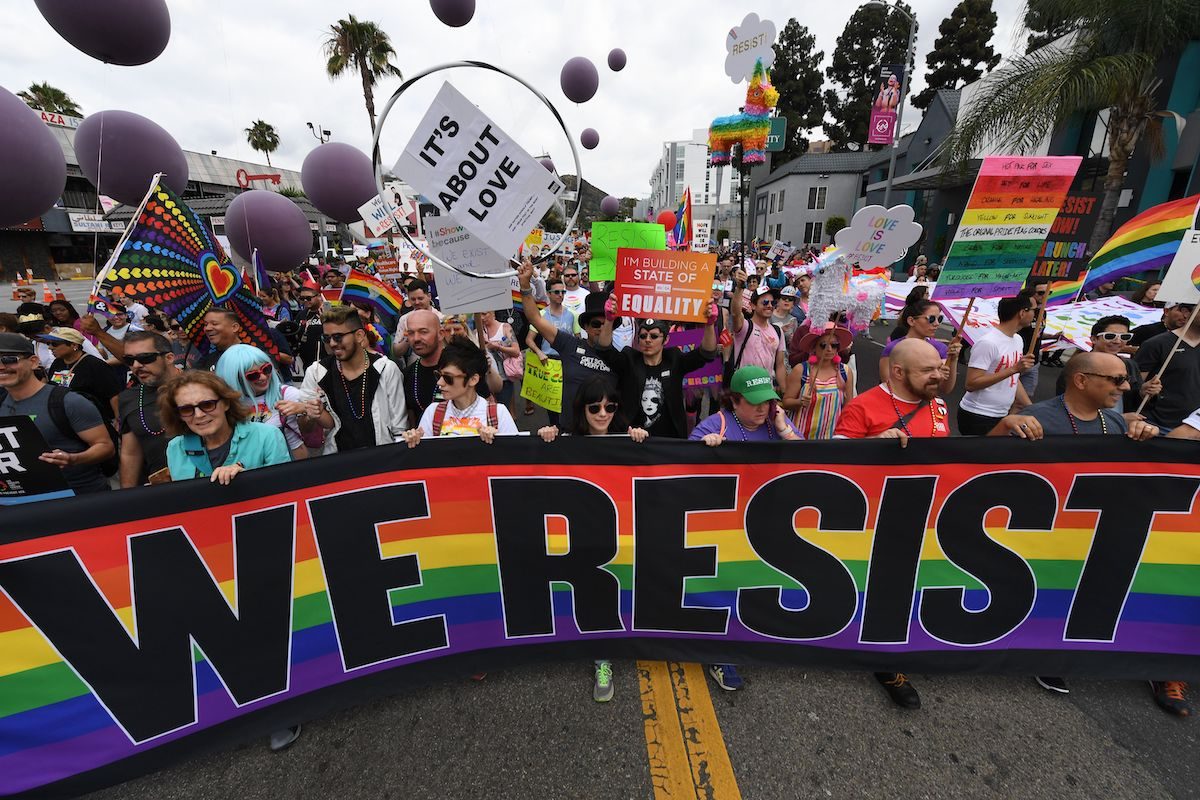 The Trump administration announced this week that they were going to launch a global campaign aimed at decriminalizing homosexuality in the dozens of countries where being gay is still a punishable offense. In some places, as seen in the recent execution of a young gay man in Iran, it’s still punishable by death.

At first glance, this most definitely seems like one of those rare times when Trump says or does something worth celebrating. But when you look closer, it’s very clearly just the same old Trump behavior–meaning it’s hypocritical, superficial, and just generally terrible.

Let’s start with the hypocrisy. To take this campaign as a sign that Trump is anything close to an LGBTQ ally would require a total dismissal of everything he has done to further the oppression of those communities here at home. From the transgender military ban to supporting government funding of discriminatory faith-based adoptions to the very choice to name Mike Pence his VP, Trump and his administration’s lack of support for and aggressive attacks on LGBTQ+ people are a huge basis of what they stand for.

To focus this sort of attention outward while actively undermining the rights of LGBTQ+ Americans makes it all too clear that this isn’t about gay rights at all. As Mathew Rodriguez at Out writes, “Rather than actually being about helping queer people around the world, the campaign looks more like another instance of the right using queer people as a pawn to amass power and enact its own agenda.”

When NBC first reported news of this plan, they noted that Iran, which looks to be at the center of the campaign, is the Trump administration’s “top geopolitical foe.” Trump is notoriously cozy with fellow Iranian foe Saudi Arabia, and the EU wasn’t exactly thrilled that Trump pulled out of the Iran Nuclear Deal–as evidenced when Mike Pence called for other countries to follow suit during a recent speech and was met with hilariously uncomfortable silence.

So is Trump using gay rights as a way to win back favor with the EU? What will happen if they want to include Trump’s buddy Saudi Arabia in this campaign, which is said to focus on the Middle East, Africa and the Caribbean? Homosexuality is still punishable by death in Saudi Arabia, as well as in other countries considered U.S. allies like the United Arab Emirates, Pakistan and Afghanistan. Trump wouldn’t even speak out against Saudi leaders in the murder of a journalist; will he condemn them now? Or will he offer more proof that he doesn’t care about gay people beyond how he can use them for his own personal and political gain?

Trump has also ignored government-driven violence against LGBTQ+ people in Russia, land of his pal Putin. Human Rights Campaign senior international policy advocate Jeremy Kadden said in a statement (via The Daily Beast), “Donald Trump and Mike Pence have turned a blind eye to a campaign of violence and murder targeting LGBTQ people in Chechnya that has stretched on for two years. They have turned away LGBTQ people fleeing violence and persecution and sent them back to countries that criminalize them, and have consistently worked to undermine the fundamental equality of LGBTQ people and our families here at home from day one.”

Obviously, the criminalization of homosexuality needs to be eradicated worldwide. But there are so many things wrong with this campaign, led by U.S. Ambassador to Germany Richard Grenell, who, according to NBC, is “the highest-profile openly gay person in the Trump administration,” in consultation with other European LGBTQ+ activists. The apparent total exclusion of any voices from the areas they’re targeting gives the campaign a colonialist look and makes it appear more anti-Muslim than pro-LGBTQ+.

As Rodriguez lays it out,

Grennell’s sudden interest in Iran’s anti-gay laws is strikingly similar to Trump’s rhetoric after the 2016 Pulse massacre in Orlando, Florida. After the deadly shooting, Trump used the 49 deaths as a way to galvanize support for an anti-Muslim agenda rather than find a way to support LGBTQ+ people. In pushing for immigration restrictions and a Muslim ban, Trump argued, he was the true pro-LGBTQ+ candidate. Rather than honor those who died, Trump used the tragedy as a way to stoke fear among the American people, and Grennell is taking similar actions with Iran — trying to reach an economic goal by painting the administration’s opponent as anti-gay.

Someday I want to write an article about how Donald Trump did something that sounded great and actually was great–with no strings attached, no ulterior motives, and with no optics-driven manipulation of marginalized communities. That would be a weird day, but I promise I would celebrate it if it ever comes.

Edited to add: I honestly don’t even know what to make of this video from earlier today, which I saw after publishing this article:

REPORTER: Mr President, on your push to decriminalize homosexuality, are you doing that? And why?

REPORTER: Your push to decriminalize homosexuality across the world.

TRUMP: I don’t know which report you’re talking about. We have many reports. Anybody else? pic.twitter.com/3eGVvMVXFt

Trump clearly has no idea what’s going on with his administration. Everything about this is bizarre.