Flatworms Keep Memories After Having Head Cut Off | The Mary Sue

Flatworms Can Retain Memories After Having Their Heads Cut Off

Dear flatworms, Sorry We know this is a rough way to treat something, but it's nothing personal. Sincerely, Science 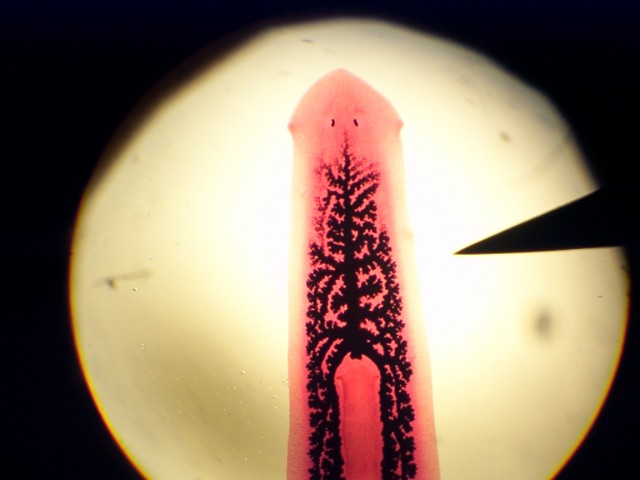 Planarian flatworms are simple creatures, but they have some some amazing biological characteristics that have long fascinated scientists. A new study by researchers at Tufts University suggests shows that some flatworms can remember things — like training that makes them less averse to light — even after having their heads cut off and allowed to regrow. The new brain the worms develop when they regenerate, it seems, remains the same as the brain they had, down to recollections of the time before their head was rudely separated from their body.

Researchers in the study taught the planarian flatworms to tolerate light and open space, two things that are ordinarily anathema to the worms, which thrive in dark, cramped quarters. The worms reward for their hard work in learning to tolerate these alien conditions? Decapitation, naturally. What can we say — science is a harsh mistress sometimes. On the bright side, though, losing a head isn’t a death sentence for flatworms, thought we can’t imagine it’s pleasant. Two weeks after being decapitated, the flatworms in Michael Levin’s lab at Tufts University had regrown their heads.

That’s not all the worms regenerated, though. According to research published in the Journal of Experimental Biology, the worms not only regrew their brains, but the memories they contained. After training worms to tolerate light by making food available in well-lit quadrants of petri dishes, researchers beheaded the worms. Once the worms heads had regenerated, they were placed back in petri dishes, where previously trained worms remained faster to travel into lit areas for food than their untrained counterparts.

It’s still unclear how this mechanism functions, though. The worms could have memories stored throughout their bodies somehow. Or, researchers say, the training could have brought about unexpected epigenetic changes that made the worm more likely to associate light with food. Unfortunately, since flatworms aren’t known for their skill at filling out post-decapitation Q&As, more research is necessary to discover just how the worms are training their training after losing their heads.