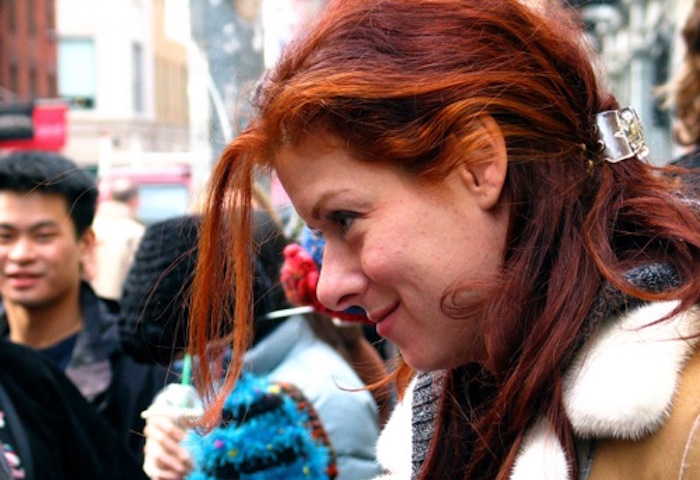 This week was the MAKERS conference, featuring speeches, stories, and interviews from trailblazing women (and men), centered around this year’s theme of #BeBold. But as women talk about their power, it’s inevitable that there will be stories of the times they were made to feel like their lowest, weakest selves. And there’s no shortage of those stories–women being put down and torn down by the powerful men around them–when it comes to the dealings of Hollywood’s entertainment industry.

And then on her first day of shooting, when her character and Reeves’ are reunited, they come in for the “big kiss” in a closeup of their profiles coming together, and that’s when Arau yelled “CUT.” He then yelled out,

How quickly can we get a plastic surgeon in here? Her nose is ruining my movie.

First of all, eff that guy so hard for not doing his damn job. That’s what auditions and screentests are for. If he didn’t like her look (because Hollywood is, shamefully, very much about the right “look,” often over actual talent or anything else), it can only mean he hadn’t been paying attention. That’s on him.

As Messing tells it, he referred to her as “that nose” for the day. Which is not exactly surprising. Sure, it may have made her feel “special” for him to call her Bella instead of bothering to use her name, but reducing her to her appearance positively isn’t that different than reducing her to her appearance negatively. Compliments can still be minimizing, they can be demeaning. But the intention there can be hard to see until the person bestowing them has turned that nasty corner.

In addition to making her feel “ugly” and like “garbage,” “that nose” also brought back memories of being the only Jewish child in her suburban Rhode Island class. Memories of being called a “kike,” seeing swastikas drawn on her family’s car, of not understanding why she was so hated, but in feeling it was definitely her fault, that she had done something wrong. When a director is yelling at you that your nose is ruining his movie, for a young woman on her first movie set, it must be impossible to fight the feeling that yes, you are to blame for his anger.

Did Arau know that he was not just making a woman feel insecure over her looks, but also attacking her religion and heritage, one that brought so much pain in her youth? Either way, his goal was clear: to shame and belittle her. To make her feel worthless.

Things took an even worse turn when out of nowhere, Messing was told she’d be shooting a nude scene. This is the kind of thing that HAS to be written into contracts and negotiated over by the actors and their agents. This is why actors have unions. It’s infuriating that her agents’ response was, as she relays it, “You have two options: You can say no and they’ll fire you or you can do it and keep your job.”

When Messing confronted Arau about the fact that she hadn’t been told there would be nudity in this PG-13 movie, he yelled at her, “Your job is to get naked and say the lines. That’s it.” It’s pretty shocking to hear that this director just came right out and said what so many maintain as merely the subtext for how they exploit young actresses. He followed that up with this all-too prevalent message that keeps actors everywhere from making waves: “You should be grateful to have this part. Get out.”

Messing says she returned to her trailer where someone was waiting to put makeup on her labia, and did the scene as demanded. During the shoot, Arau made her stand, barely covered, while he circled her to set up shots; he lifted the bed sheet covering her to drape it, scanned her naked body, then dropped the sheet on top of her “like a used Kleenex, then walked away without a word.”

And in the end, the only naked part of her body that made it into that scene was her back. As she describes it, “The whole thing was a power play. A game. And the goal? To demean me, strip me of my pride and power, make me feel on a cellular level his dominance of me.”

Stories like these should be rare. I mean, they shouldn’t happen at all. But they do, and it’s disgraceful to this industry that we can hear a story like this and add it to the pile of so many others. This sort of mistreatment through exploitation of sexuality and the feeding of men in power on young women’s physical insecurities often feels like the default for stories out of Hollywood.

On a personal note, I started reading Jessica Valenti’s fantastic book Sex Object last night, and I recommend everyone immediately pick up a copy. The first (exhausting, painful, inspiring) chapter discusses victimhood, and how we approach owning and/or dismissing it. This passage stuck out for me:

Victimhood doesn’t need to be an identity, but it is a product of facts. Some women heal by rejecting victimhood, but in a world that regularly tells women they’re asking for it, I don’t know that laying claim to “victim” is such a terrible idea. Recognizing suffering is not giving up and it’s not weak.

Arau was disgusting in his treatment of Messing, and most likely in his treatment of other actresses on other films. Messing was in a vulnerable position as an inexperienced, young, beautiful actress. Arau, by most ways of looking at this account, won. His power play proved him powerful.

But by remembering it, naming it, and recounting it, Messing also gained power. It’s unfortunate that her power–like so many women’s power–had to be gained through being dominated and humiliated, but as Messing describes the way she found a home in television (where her “imperfections” were marketable), and a confidence with not only her appearance, but the confidence to stand up to powerful men who wanted her to change (like the network president who thought she should be a C-up on Will & Grace) came from that experience with Arau.

Confidence and power aren’t an immediate acquisition. It’s not like Messing worked with Arau and suddenly learned agency with a cartoon lightbulb of confidence dinging on above her head. It’s a constant struggle, in which, hopefully, these experiences of pain slowly, possibly imperceptibly, probably clumsily, build to create the kind of strength and self-value we all strive towards.

You can watch the video of Messing telling her story here.