Why Is The 'Death Wish' Trailer in Theaters | The Mary Sue

Why Is This Death Wish NRA Propaganda Trailer Still in Theaters?

Thoughts and Prayers I Guess... 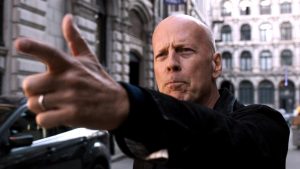 As I sat with my popcorn and soda getting ready to watch Blade Runner 2046, the trailers began to roll and one, in particular, made me tilt my head to the side and say “Seriously?”

Death Wish, an Eli Roth film (not a great sign already), is about Bruce Willis being a lone vigilante gunman going around and shooting criminals. During the opening Sway in the Morning asks us if he’s a hero or a criminal.

While we have already covered this film, seeing it in theater previews so soon after the Las Vegas shooting reminded me that we are in a society that is in love with the idea of a lone gunman who comes in and kills bad guys, without any care for things like due process or rights.

“But it’s just a movie, why so serious?”

I mean does Bruce Willis’s character know that committing a carjacking doesn’t earn someone a death sentence? We don’t kill people for that in our justice system, so why is he doing it?

Now, I love action movies and I’m not trying to say that we can no longer have violent films or even some gun-fu in films. The larger issue is that these films just act as though these characters are in the right for taking the law into their hands to avenge their dead wives, daughters, etc with no sense of the real carnage they are doing.

Also, the idea of an older white man going around delivering justice doesn’t exactly bring my black ass any comfort.

This year at New York Comic Con, Marvel pulled a lot of its promotional events for The Punisher because they understood that considering the content and recent events, it wasn’t a good look. That is a good gesture, but the reality is that it’s going to come out anyway, and so is Death Wish.

Maybe all the movie executives should watch the “Thoughts and Prayers” episode of Bojack Horseman and catch a clue.