"Brinicles," the Terrifying Icy Finger of Death on the Ocean Floor 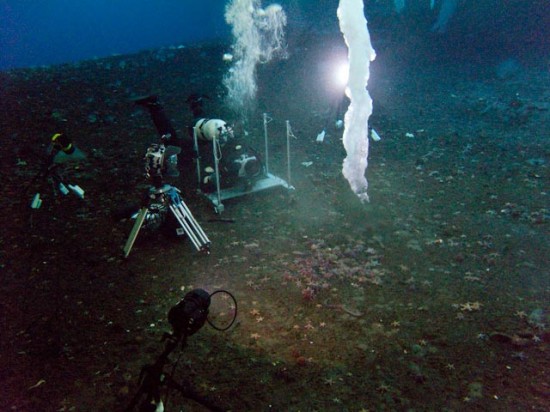 Midwestern lore has it that icicles hanging off roofs can go right through a man unlucky to pass underneath as it falls. However, such terrestrial dangers seem like small potatoes when compared with “brinicles,” the icy sheaths of super cold water found in polar regions. These bizarre, twisting tendrils of ice snake down from the much colder surface and freeze everything they touch once they hit bottom.

Now, a BBC camera crew has successfully captured a time-lapse film of the birth of a brinicle, and the death it brings to the ocean floor.

Unlike icicles, which are formed by water dripping and freezing in colder air, brinicles form because of the peculiarities of super cold ocean water. In the arctic, the air can be -4° F, while the water is comparatively warmer at 29° F. In these conditions, sea ice forms with channels through which highly salty water flows downward toward the bottom. The very cold, very salty water freezes the warmer, less salty water slowly creating a giant tube through which the freezing water flows.

Eventually, the tube touches bottom and the freezing touch extends outward, killing anything in its path. It’s bizarre to read about, and even stranger to see — especially in time-lapse form. Like this, it seems less likely a natural occurrence and more like a spell cast by a wizard that really has something against sea dwelling invertebrates.