We know you want to make things better for women -- now, do it. 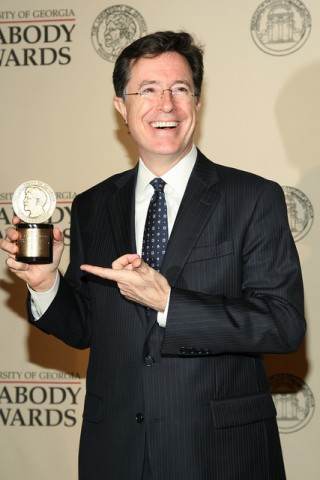 The Late Show with Stephen Colbert premiered on CBS this week! Now, I’ve loved Stephen Colbert for a long time, and I’m thrilled that he got this new opportunity. I just wish that he’d use this new venture as a chance to make good on some promises.

Before Late Show‘s premiere, Colbert did a column for Glamour Magazine last month called “Stephen Colbert Shares Why He Thinks Women Should Be in Charge of Everything.” In it, he talks about (in his typical Colbert-y way) why it’s important for there to be a greater female presence in late night television – and pretty much everywhere else:

Point is, I’m here for you, and that means I’m going to do my best to create a Late Show that not only appeals to women but also celebrates their voices. These days TV would have you believe that being a woman means sensually eating yogurt, looking for ways to feel confident on heavy days, and hunting for houses. But I’m going to make a show that truly respects women, because I know that there’s more than one way to be one. Maybe you’re a woman who likes women. Maybe you like women and men. Maybe you’re a woman who’s recently transitioned. Maybe you’re a guy who’s reading this magazine because your girlfriend bought a copy and it looked interesting.

Whoever you are, I promise: I’m going to lean in on this. It really accentuates my muffin top.

Sounds great, right? And yet, as the credits on Late Show roll, it’s clear to see that of Colbert’s 19-person writing team, only 2 are women. Even worse – all 19 are white. Now, it’s all very well to pay lip service to feminism. It’s quite another to follow it up with action, whether it’s by actively prioritizing hiring more women and people of color on your show, or actively speaking out against other shows that don’t. Ideally, both.

Jezebel had a great post a couple of years ago analyzing why it might be that there aren’t more women writing in television, and it brought up the point that, when there’s a little bit of progress, many people make the mistake of thinking the problem’s been solved and get complacent – which causes a backslide. Now, this piece was pre-Shonda Rhimes. However, the fact remains that despite accounting for the majority of the people on the planet, women are a minority in far too many industries – television being one, with late night television specifically being one of the worst.

There is, of course, the notion that talent needs to be nurtured – and so showrunners need to be more active about taking chances on new female talent in order to cultivate it. However, there’s also the fact that there are already talented female writers out there at varying levels of experience who’ve been given work before, but for some reason have trouble keeping work, even as male writers of varying experience levels successfully bounce from show to show.

And they’re not too terribly hard to find, either. The Writers Guild of America has a writers database that anyone can go to if they’re looking to hire women (or people of color, or older writers, etc). Websites like Ms. In the Biz are building their own databases like “Hire a Ms” where you can find writers, as well as other female crew. Or there’s just, you know, asking the women in the industry you know for recommendations. After all, it’s not as if Colbert doesn’t know talented, funny women that could either join his team, or recommend other women they may be mentoring.

And sure, maybe they did approach more than two women, and those other women weren’t available or interested. However, I find it really hard to believe that there aren’t more than two women out there who are promising/skilled comedy or variety writers that would be able to take up more than two spots on a 19-person team. Hell, there are 900+ women on the WGA database alone.

But it has to be an active choice. If we’re going to see real progress, those in positions of power in television need to decide that they’re going to hire more women, and then do it. Not lazily assume that the problem will resolve itself, or see that there are two entire women on this writing staff and think that’s enough. It’s not.

So, Mr. Colbert, I know that you’ve just started your new job, and you’ve got a lot going on. But once you get settled, maybe you can go back and re-read the Glamour column you wrote and do what you say. Because that Stephen Colbert knew what he was talking about. This Stephen Colbert needs to act on those promises.

By the way, I’m an aspiring television writer. I can be reached at The Mary Sue.