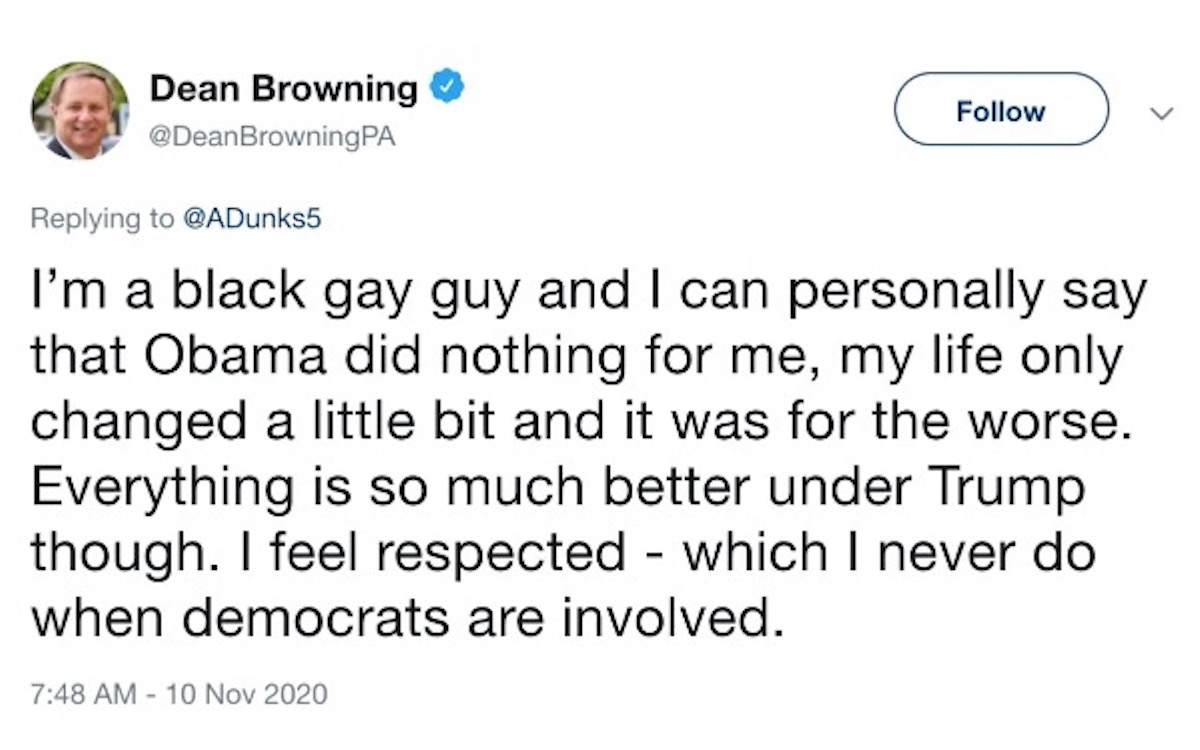 An epic saga unfolded online yesterday, the kind that decades from now, historians will look back on still say “…WTF was that?” Ok, not really. They’ll have completely forgotten it ever happened. But for a few hours on Twitter, it was an all-consuming bizarro-world bonanza.

It all started with a former county commissioner and failed congressional candidate from Pennsylvania named Dean Browning. According to his Twitter bio and picture, Browning is a pro-Trump “pro-life & pro-2A Christian conservative,” and very, very white.

Ummmmm somebody come look at this pic.twitter.com/bDzZpkaU1z

It looked like Browning forgot to switch over to a sock puppet account—an account used to present a false identity, usually in order to pretend to be a part of a marginalized group in order to shut down conversations about political and social issues.

That seemed to be what Browning was doing, responding to someone talking about how Trump destroyed everything the Obama administration spent eight years building up by claiming to be a “black gay guy” who thinks Trump is a better president than Obama.

It didn’t take people long to find the apparent sock puppet account he likely meant to switch over to—a person going by the name Dan Purdy, who claims to be a gay Black man who responds to Browning’s tweets a lot. The account is full of defenses of Trump and some really disturbing comments about women, Black people, and especially Black women in particular.

pretending to be a black man online so you could post more freely about how much you hate black people was a weird plan, dean pic.twitter.com/Qc99VQnqBh

imagine using your racist alt to complain about a show on hulu that has “too much female empowerment” pic.twitter.com/jK4GvPcB6W

so from googling it would appear @deanbrowningpa‘s black guy identity “Dan Purdy” was also once used on the suspended account @soulcookie322. but before that account became Dan Purdy, it was a white guy named “Pat Riarchy” and “White Goodman”. dean is really something else pic.twitter.com/gFkUPkNDPV

It seemed like a pretty clear instance of a white MAGA troll forgetting to switch accounts before doing some trolling. Browning deleted his tweet and claimed that he was “quoting a message” from one of his followers, which wasn’t exactly believable.

That’s when we got our first plot twist, though! “Dan Purdy” also posted a video to his Twitter account to prove that he is a real person and not a sock puppet. He said that the message Browning tweeted was from him but claimed that it was posted as some sort of technical glitch.

It still wasn’t totally clear if these videos were real or if they were deepfakes or if this was maybe an actor hired by Browning.

That’s when we got plot twist number two. “Dan Purdy” also had a Facebook account under the name “Byl Holte,” which seemed to be a nickname for William Holte, which was also the name in the account’s URL. The pictures and cartoon avatar for both accounts were the same.

As it turned out, William Holte is also the nephew of legendary singer-songwriter Patti LaBelle. (LaBelle adopted Holte and his sister after their mother’s death, so sometimes he is referred to as LaBelle’s son.) He also happens to actually be a pro-Trump conservative who runs an “anti-feminist” TV criticism blog.

So were those videos actually him? “Purdy’s” vile tweets seem to echo Holte’s views posted elsewhere online. His Instagram account, which was tagged by his (Biden-supporting) aunt in pictures of him, is @Byl322, reminiscent of both his Facebook handle “Byl Holte” and his Twitter account “@DanPurdy322.”

Happy New Year from my nephew @byl322 and me! Be safe everyone! 😘

It will be hard to know for sure, though, since sometime between Tuesday evening and Friday morning, his Twitter account was permanently suspended for violating the site’s rules. (But which rules??? Impersonation or was it something else?)

I don’t know if we’ll ever get answers as to what exactly happened here, but it’s been a wild ride.

Patti Labelle’s adoptive son is a Philly-area landscaper posing as “Dan Purdy,” a gay Black MAGA dude, in order curry favor with (?) or as a favor *to* some low-level elected in Lehigh County.

did i miss something?

(I really hope so and that there’s more!)

so you’re telling me that Patti LaBelle’s son Byl Holte has an alternate Twitter account under the name Dan Purdy, from which he spends most of his time online replying to people who are being mean to Pennsvylania Republican Dean Browning?????

if the patti labelle reveal is true, this is a top 10 all time twitter scandal

Sometimes the simplest explanation is that it was actually Patti LaBelle’s son.