What Deadpool Can Teach Us About Coping With Trauma

Deadpool is a culmination in the rise of traumatized super-people who use humor as a coping mechanism, and that’s kind of cool. 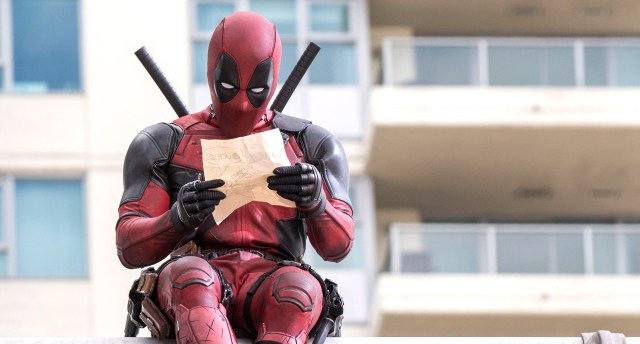 Whether or not you embrace Deadpool is largely dependent on whether or not you embrace the Wade Wilson sense of humor, not to mention the objects of his ridicule (namely: everything). Right off the bat, we’re already treading into the disingenuous South Park territory of “mocking all things equally,” and given that, by his very nature, Deadpool sidles right up to the party line of “equal opportunity offender,” I can see where his exploding popularity might make some people roll their eyes in exhaustion.

In examining the appeal of Deadpool the character, critics either dismiss it as sophomoric revenge fantasy (which it unapologetically is) or embrace it as unapologetic, crude escapism. I’m not about to put it on a pedestal and say Deadpool is a revelation of the art form (while entertaining, the film is certainly flawed), but I also feel like both interpretations are unfair and miss what the appeal of Deadpool is and has been even before the movie. Deadpool is more than just a genre-bending, fourth wall-breaking jokester; he’s a genre-bending, fourth wall-breaking jokester whose sense of humor stems mostly from the fact that his life is horrible, and this is how he copes. Whether he is legitimately crazy or not (ostensibly he the only character in the Marvel universe who knows he’s a character in a comic book), he copes using humor, because that’s the only thing keeping him afloat.

This, I think, strikes a chord with a lot of people.

Guardians of the Galaxy and Chris Pratt’s shameless manchild Hollywood persona may have opened the door for superhero comedy, but while both Star Lord and Deadpool embody a flagrant, proud immaturity that has come to define a generation of male protagonists, the womanizing Star Lord is fairly conventional, a normal guy self-insert for normal guys. Deadpool, conversely, is one broken little bird, not only “crazy” from a “rough childhood” and a life of killing and maiming for money, but now hideously deformed after a diagnosis of terminal cancer. What else could go wrong for Wade?

That is not to say that every joke lands, or that just because Wade has a lot of trauma he can get away with “mocking all things equally.” Wade’s suggestion about “hard spots” to a pizza delivery boy is a little … iffy, not to mention the bad childhood competition he starts when he first meets his love interest, Vanessa. In fact, a big factor in how forgiving you might be of Deadpool’s humor is whether or not you read this conversation as sincere, whether Wade and Vanessa are making up their Tragic Backstories or are just improvising mistruths that sound horrible. “Rough childhood?” he asks her after initial introductions.

“Ever had a cigarette put out on your skin?” she coos. Rather than backing down, Wade takes this as an opportunity and the two engage in a sort of joking trauma-off as to who had the worse childhood.

“I was molested by my uncle,” says Wade in a joking-not-joking manner, to which Vanessa counters in a similar fashion, “Uncles.” The two then drop the facade and laugh—there seems to be a genuine moment of empathy here. Regardless as to whether or not they’re telling each other the truth, I find this interaction interesting, because it echoes interactions I’ve seen in the real world. The baggage of trauma is awkward, and it’s difficult to let new people in on the experiences that have informed you as a person. How do you introduce to someone the fact that something horrible has happened to you in your past?

Easy: You joke about it.

This is the fine line that must be walked when it comes to making jokes about terrible things—sexual assault, terminal illness, personal violation, and torture—all things that Wade has experienced, and all things he deals with, at least in part, using humor. There’s something novel, even therapeutic, about seeing a character deal with his own personal grief by laughing at it.

Deadpool lives more in the vein of characters like Dr. House and Spider-Man, whose character appeal goes deeper than just “snarky male protagonist,” but the closest recent point of comparison would be Jessica Jones from her eponymous Netflix series. Both Jessica and Wade have similar professions (he a mercenary, she a PI), both have similar approaches to conflict resolution (he prefers violence; she prefers violence), and both have a traumatic upbringing that culminates in an even worse adulthood. But Jessica Jones takes on the issue of PTSD directly and in-depth in a way you rarely see on television and never see in Disney-owned Marvel-based brands; Deadpool, not so much. But you know what? There’s a place for that, too.

Puerile revenge fantasy though it may be, Deadpool does have an emotional core, and the glue that holds the movie together is the relationship between Wade and Vanessa. The film tries to subvert the typicality of the female love interest (the opening credits credit her as “A Hot Chick”), and it works … well, some of the time. It’s cookie-cutter superhero movie fodder in some ways, but unique in others.

But if one is to say that they do have a bond deeper than their physical attraction, it’s that they empathize with each other’s histories. Wade doesn’t just love Vanessa because she’s attractive or because the movie said so. They have great sexual chemistry, sure, but their true bond is deeper than that. They’re both messed up people, but they don’t judge each other. “I think the reason we’re so good together is because your crazy matches my crazy,” he says after asking her to marry him. “Like jigsaw puzzles,” she adds. “You put them together and you see the picture on top.”

Both Wade and Vanessa refer to themselves as “crazy,” but that doesn’t mean that they’re unlovable or that they need to be “fixed.” In a media landscape where “crazy” equals broken, and anti-heroes are Forever Alone, it’s surprisingly optimistic.

Declaring certain topics off limits for humor makes them untouchable, and then the only people who are making jokes about sensitive subjects are the assholes who are just trying to shock and anger people for shock and anger’s sake. People often forget that humor isn’t just entertainment; we need humor as part of the coping process. Deadpool’s approach to trauma is by no means healthy, but sometimes we need that kind of escapism—the idea that a character can look at their tragic backstory in the face and laugh at it. People point to Deadpool’s meta nature and his fourth-wall-breaking ways as the main appeal, but the fact that Wade can confront his brokenness with humor is what makes him resonate on a more memorable level.

Deadpool’s sense of humor isn’t just the outside-looking-in, Family Guy-style joking about bad things at the victim’s expense, but also from the victim’s point of view, and that we need more of. As with Jessica Jones, we need to see more narratives where victims take back their experiences through humor. Is the idea that Deadpool responds to trauma with jokes, violence, and jokey violence realistic or a healthy approach? No, but even so, sometimes that kind of escapism is cathartic, because sometimes life is horrible, and the only thing you can do is laugh at it.

Lindsay vlogs on various topics nerdy and nostalgic on YouTube, co-hosts irreverent book show “Booze Your Own Adventure,” and is co-founder ofChezApocalypse.com. If you don’t mind your timeline flooded with tweets about old cartoons, dog pictures and Michael Bay, you can follow her on Twitter.