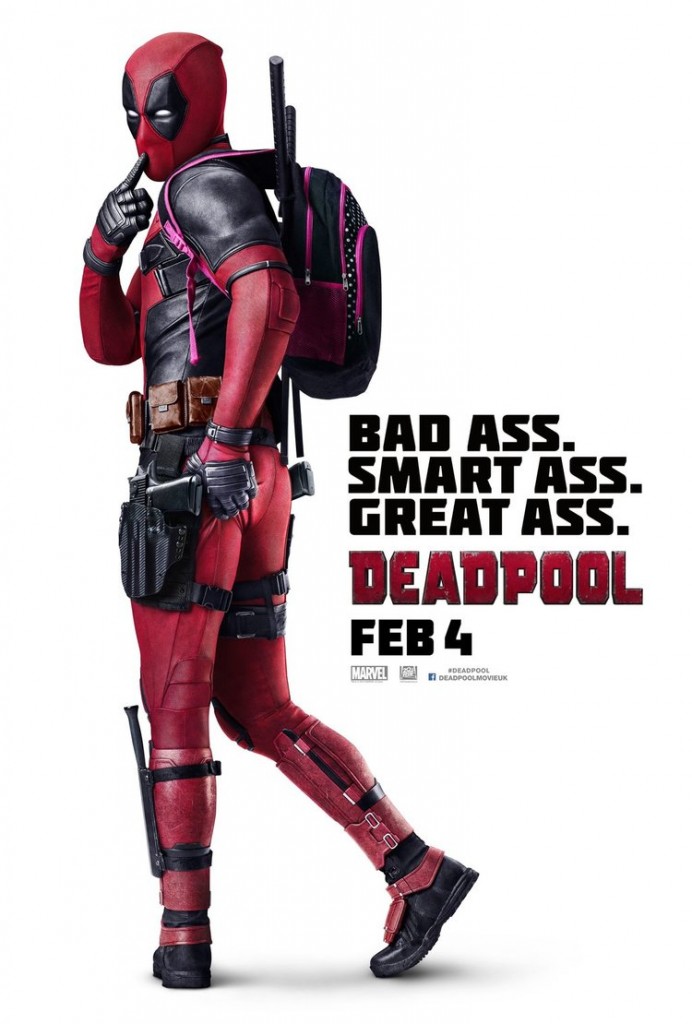 Have you noticed a trend in the advertising for Ryan Reynolds’ upcoming Deadpool film? It started out pretty subtle, with the video of Deadpool having a pipe and a glass of cognac. Then there was that poster of Deadpool lying on a bearskin rug by a fireplace. And this past Thanksgiving, the promo image of Deadpool lying on a table in front of a Turkey Day feast. As of today, we’ve got the most recent international poster from 20th Century Fox, depicting Deadpool doing the classic back-twisting pose that allows the camera to see both his backside and his chest at once. He’s also grabbing his own butt with one hand and kissing his fingertip with the other hand, and he’s wearing a black backpack with pink detailing on it.

There’s a lot going on here.

Media sexualizes men rarely — and usually, when men are sexualized, the act is presented as a joke, as opposed to something that the audience would find genuinely sexy. And, often, the inherent joke is one with homophobic intent, because the viewer is still presumed to be a straight male. Part of the problem is that sexiness is often defined by vulnerability, surrender, permissiveness, and femininity — so a man who is “acting sexy” according to our definitions of sexiness is also seen as “acting feminine,” by default. The series of poses that media has defined as “sexy poses” are all feminine poses, and it’s pretty easy to see that in Deadpool’s advertising. He’s posing in much the same way that female models do in advertisements, and that’s the joke.

Part of what makes this joke extra-complicated, though, is that Deadpool is canonically pansexual — both in this movie and in his comics, although the portrayal of his sexuality in the comics has historically been fraught. Given the cultural stereotypes about bi/pan folks supposedly being too sexual, and given the stereotype that all pansexual men are secretly gay and/or that bi and pan men don’t exist, it’s hard for me to know what to think of these Deadpool ads.

Little touches like the pink details on the backpack make me wonder: are we supposed to laugh at him? Or with him? Both, I think — but is he also being presented as a genuine object of lust? I would argue, no. I think we’re supposed to think it’s funny that anybody would be attracted to Deadpool. His sexuality is often presented as a joke in the comics — and although I can reclaim that, as his fan, it’s a tough road. And it’s making me a little worried about the direction of the film.