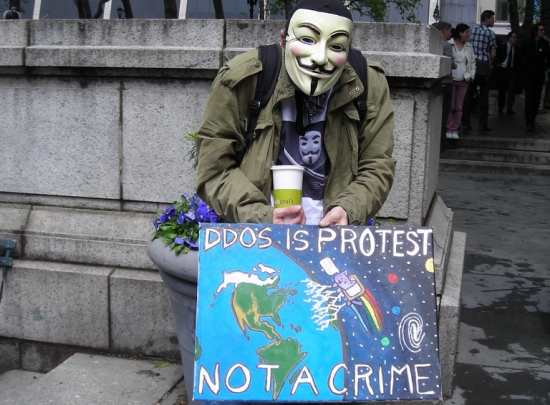 Yesterday we covered the White House’s response to the petition asking them to build a working Death Star. Sometimes though, people try to use the government’s We the People petition program to try to accomplish things that might be possible. Anonymous has posted a petition to the site asking that the US Government officially declare Distributed Denial of Service (DDoS) attacks to be a form of protest, and not a crime. This stands about as much of a chance as the government building a Death Star, and the response probably won’t be nearly as funny.

The author of the petition compares DDoS attacks to performing a virtual sit-in, calling it the equivalent of repeatedly hitting “refresh” in a browser window, saying:

It is, in that way, no different than any “occupy” protest. Instead of a group of people standing outside a building to occupy the area, they are having their computer occupy a website to slow (or deny) service of that particular website for a short time.

There is some merit to that argument. Besides a temporary slowing or interruption of service, there’s no damage done to a website by a denial of service attack. When the DDoS “protest” is over, the site resumes running as usual. Though not all DDoS attacks are done as protests.

Frankly, what the petition is asking for is too simplified to be seriously considered. The government would never say that all DDoS attacks are protected as acts of protest, because they don’t say that about any other form of protest they already recognize. Protests have their limits. When and where people can legally protest in public are subject to things like permits.

The petition also asks that anyone currently in prison for reasons related to DDoS be immediately released and their records be cleared of the incident. That’s the least likely bit of the petition to be taken seriously by the government. There could be an argument for individual cases of DDoS attacks being considered protests, but even that’s not likely.

The petition is currently at 3,715 of the required 25,000 signatures to get an official response from the White House, and has until February 6th to make up the rest. They still have plenty of time to get the signatures they need for a response, but it’s pretty obvious what that response would be if they do.

If you want to check out and support a petition asking for something the government might actually consider doing, there’s one up on the We The People site right now pushing for the U.S. to convert fully to the Metric system. It already has 29,223 signatures, and has until January 30th to get more.

(via We the People, image via pameladrew212)