Dawson’s Creek at 20: The Cast Reunites and Has No Right to Still Be as Attractive as They Are

Especially Grams and her lustrous locks.

I became a hardcore fan of singer/songwriter Paula Cole back in the 1990s when I first listened to her hit album, This Fire. I sang along to every song, and was obsessed with trying to get to Lilith Fair to see her play live (never did). Yet every time I hear her lilting vocals on her single “I Don’t Wanna Wait,” I don’t think of that album, or Lilith Fair. I think of Dawson’s Creek. 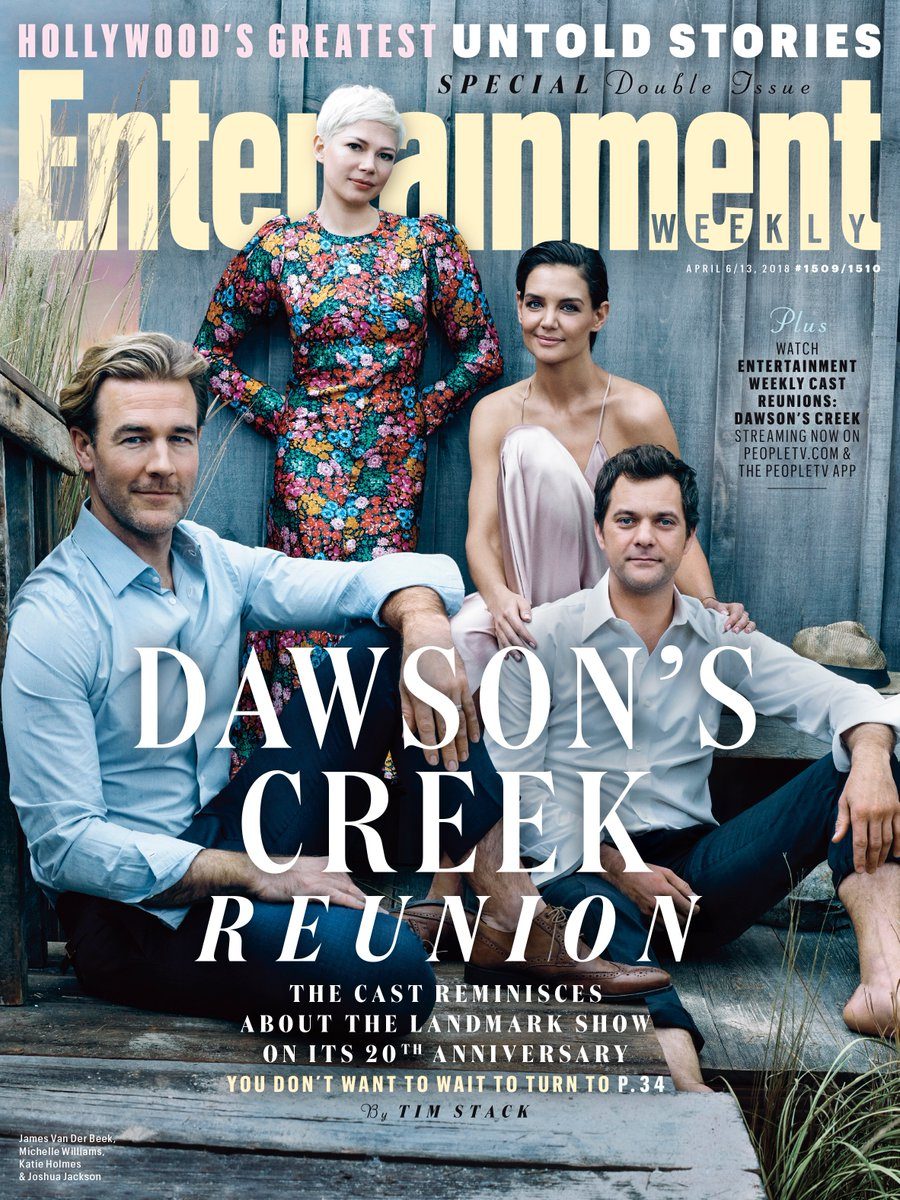 For you young whippersnappers whose brand-spanking newness makes me cry, Dawson’s Creek was a popular teen show that aired on the then-WB (now The CW) from 1998-2003. It starred James Van Der Beek as Dawson Leery, a teenage aspiring filmmaker and owner of the creek, I guess? (He did not actually own the creek). Katie Holmes played his best friend and love interest Joey Potter, Joshua Jackson was their other bestie (and later love interest of Joey’s) Pacey Witter, and pre-Oscar-bait Michelle Williams played Jen Lindley, a New York City transplant to the fictional town of Capeside, Massachusetts, where the series took place.

Twenty years after the show first aired, Entertainment Weekly has gathered the cast for a reunion of epic proportions. Of course there’s the video interview above, as well as a bunch of coverage in EW’s upcoming issue, complete with a slew of collectible covers.

Entertainment Weekly has done several of these reunion issues, like the one for Buffy’s 20th Anniversary, but for some reason, this one for Dawson’s (if you watched the show, you rarely called it by its full name. You were just watching Dawson’s) is hitting me with all the feels. Probably because, while Buffy used the supernatural as a metaphor for the pains of high school (and did so really well), Dawson’s was just about high schoolers (later, college students) actually doing the teenager thing. Sure these were all white kids in a picturesque town in Massachusetts, and I was a brown Puerto Rican girl in New York City, but I related to everyone on that show in different ways.

Dawson was a (slightly pretentious) storyteller, like me. Joey was a lower-class outcast, like me. Jen, like me, found herself drawn to people with whom she didn’t think she’d have anything in common. Pacey and I were both the wise-crackers of our group (and we shared a penchant for inappropriate crushes).

One of the talking points that came up all the time about the show was the size of the characters’ vocabularies. The fact that these kids often used five-dollar words where a two-dollar word would do. Thing is, my friends and I talked like that all the time (see parenthetical about me being a slightly pretentious storyteller above). I was an honors student and had smart friends, and we tried on words the way we were trying on our personalities, or the world.

But regardless of whether or not teenagers actually did or didn’t talk like that, the fact is that the heightened way the characters spoke reflected the heightened emotions they felt. Their vocabularies were as big as their lives felt to them; as big as our lives, as teenagers watching, felt to us. There are different ways to capture “the truth.” For me, Dawson’s captured the emotional truth of being a teenager in a way that made the picturesque, unrelatable (to me) location, the dialogue riddled with “SAT words,” and the homogeneous cast not matter so much.

And I still remember when later addition to the group, Jack McPhee (Kerr Smith), came out to his father as gay. I was studying Drama (the gayest major) at NYU (located in Greenwich Village which is one of the gayest neighborhoods in one of the gayest cities in the country), and I watched the highly-anticipated episode in my dorm room with friends.

The door to our room was open, as were our windows, and when Jack tearfully declared, “Dad, I’m gay!” There were CHEERS erupting from both places that lasted for, like, a full minute. This was back in the era of everyone watching stuff on TV when it was on all at the same time. As my friends and I screamed and jumped up and down, celebrating this queer character we’d all come to know and love, it felt like … Something. It felt like I was a part of something historical.

And yeah, it was just a stupid TV show, but it’s often those “stupid TV shows” that linger in our memory and shape our worldview, whether we realize it or not. I wasn’t expecting to write this much about Dawson’s Creek today. Yet, here I am. And now I have a strong urge to give it a re-watch.

Happy 20th, Dawson’s Creek! But seriously, though, what pact did these actors make with the Devil to get even more attractive in 20 years?! Look at these people!