David Tennant’s fast-approaching podcast,  “David Tennant Does a Podcast With…” will feature the actor and his scrumptious Scottish accent interviewing boldface names in movies, TV, and politics.

The first guest? His Broadchurch co-star and recent Academy Award nominee, Olivia Colman. We got a sneak peek, wherein we got to hear Olivia Colman discussing the logistics of a certain scene with Emma Stone in The Favourite.

First of all, if you haven’t watched Broadchurch, go and watch Broadchurch, the dark crime drama series that stars Tennant, Colman, Jodie Whittaker, Andrew Buchan, and basically every cool British actor and the most beautiful seaside cliff aesthetics you can imagine.

OK, back from Broadchurch? On the first episode of “David Tennant Does a Podcast With…,” which comes out next week, Tennant interviews Colman. Future guests include “Whoopi Goldberg, Sir Ian McKellen, Jon Hamm, the former Prime Minister Gordon Brown, Michael Sheen, Krysten Ritter and Samantha Bee, and of course the current Doctor Who Jodie Whittaker.”

I like all of these people, and I like David Tennant, so this seems like a promising venture. From the clips we’ve heard, it sounds as though the podcast will be both humorous and serious, and Tennant’s closeness to the subjects will no doubt provoke some fascinating dialogues.

New episodes will be released every Tuesday on Acast, Apple Podcasts, Spotify and all good podcast providers. It was produced by Somethin’ Else’s podcast division, Sound Directions, in collaboration with David Tennant’s No Mystery and is hosted by Acast.

You can subscribe on iTunes here so that you get the pod as soon as it comes out.

“Me and some cool people talking and stuff,” says Tennant in the charming introduction to the podcast, which can be followed on Instagram and Twitter @davidtennantpod. “Like I said, it’s very low-concept.”

Considering that most of the podcasts I listen to are about a) terrifying politics b) murder c) aliens d) revolutions, this seems like a welcome and relaxing change. 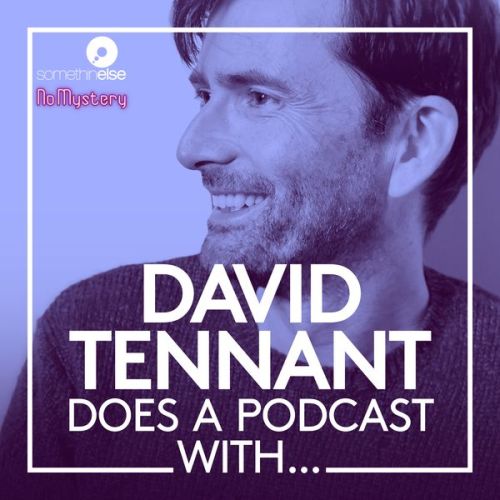 What did you see today? This might be my favorite thing: