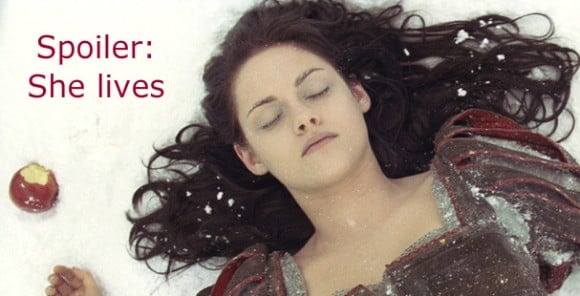 After hitting the top of the box office last week — and following the sisterly lovefest between its two female leads — Universal is looking into its magic mirror and seeing more Snow White and the Huntsman movies. While there is no official word yet on which of the titular stars will be returning or if Rupert Sanders will come back to direct, but we can tell you that David Koepp, who wrote the first two Jurassic Park movies, Sam Raimi‘s first Spider-Man movie, and almost everything else, has been chosen to write the sequel. Maybe Koepp’s efforts will make for something a little less, er, confusing.

Reviews of the highly-anticipated Snow White and the Huntsman, including our own, were pretty mixed. For many, there were good parts and bad parts, but mostly it was a festival of “meh.” A “meh-stival,” if you will. But that doesn’t mean there isn’t potential for more, at least according to Universal. They would like to see more of this warrior Snow White, played by Kristen Stewart, and the Huntsman (Chris Hemsworth) who was sent to murder her.

And maybe a second pass is what Snow White and the Huntsman needs. Deadline says that Sanders is still interested in directing again, he just didn’t sign anything guaranteeing him the gig. And it might cost Universal a bit more than it did the first time to win him back; Snow White was actually his feature film directing debut.

Sanders is interested; he had a great time making the first movie. But unlike most first time directors, he doesn’t have to come back. That’s because Snow White And The Huntsman was sold in an auction by CAA that included a presentation by Sanders of how he was going to shoot the film. Sanders was part of the package, as was producer Joe Roth, and that gave the agency leverage to make a much better deal than a first timer usually gets. The filmmaker is in demand now, but he hasn’t chosen his next film and a sequel might well be it.

That’s very insidery, we know. Also insidery, but more visible to audiences: apparently Stewart and Hemsworth have options for two sequels. Charlize Theron, who played the evil queen Ravenna, however, will probably not appear again. (Spoiler that is not a spoiler unless you don’t know the centuries-old Snow White fairy tale: She dies.)

But the hiring of someone as huge as Koepp indicates that Universal has some big plans for Snow White and the Huntsman, probably to make up for rushing it into theaters to compete with the lesser Mirror Mirror from Relativity Media. Hey, some sequels are even better than the original, like Spider-Man 2 … which was not written by David Koepp. (Alvin Sargent wrote that one.) But who’s keeping score, really?

Previously in Snow White and the Huntsman