Darkwood Is a PTSD-Inclusive Horror Game | The Mary Sue

How Darkwood Became a Horror Game That is PTSD-Inclusive

It’s been a long time since I’ve played a horror game. Not because I don’t love them in that Halloween masochistic way, I do – but because I can’t handle them anymore. My post-traumatic stress disorder has made it almost impossible to last longer than five minutes in any given horror title.

The last horror game I played went poorly. The first jump scare I knocked my mouse right off the desk, but the second one made me quit out of the game. Most people with PTSD can’t handle unexpected or sudden stimuli, and jump scares are the worst of the lot. My PTSD makes jump scares a one-way ticket to a panic attack.

More and more, we’re seeing modern horror games rely on jump scares. There are few horror fans that are fond of the tactic, as it often feels like a cheap and lazy cop-out. This tactic is, unintentionally, alienating a huge chunk of horror fans that simply can’t manage the sudden scares. For me, personally: I like being scared, I just don’t like having to deal with hours of mental fallout afterward.

As if on cue, in came Darkwood. 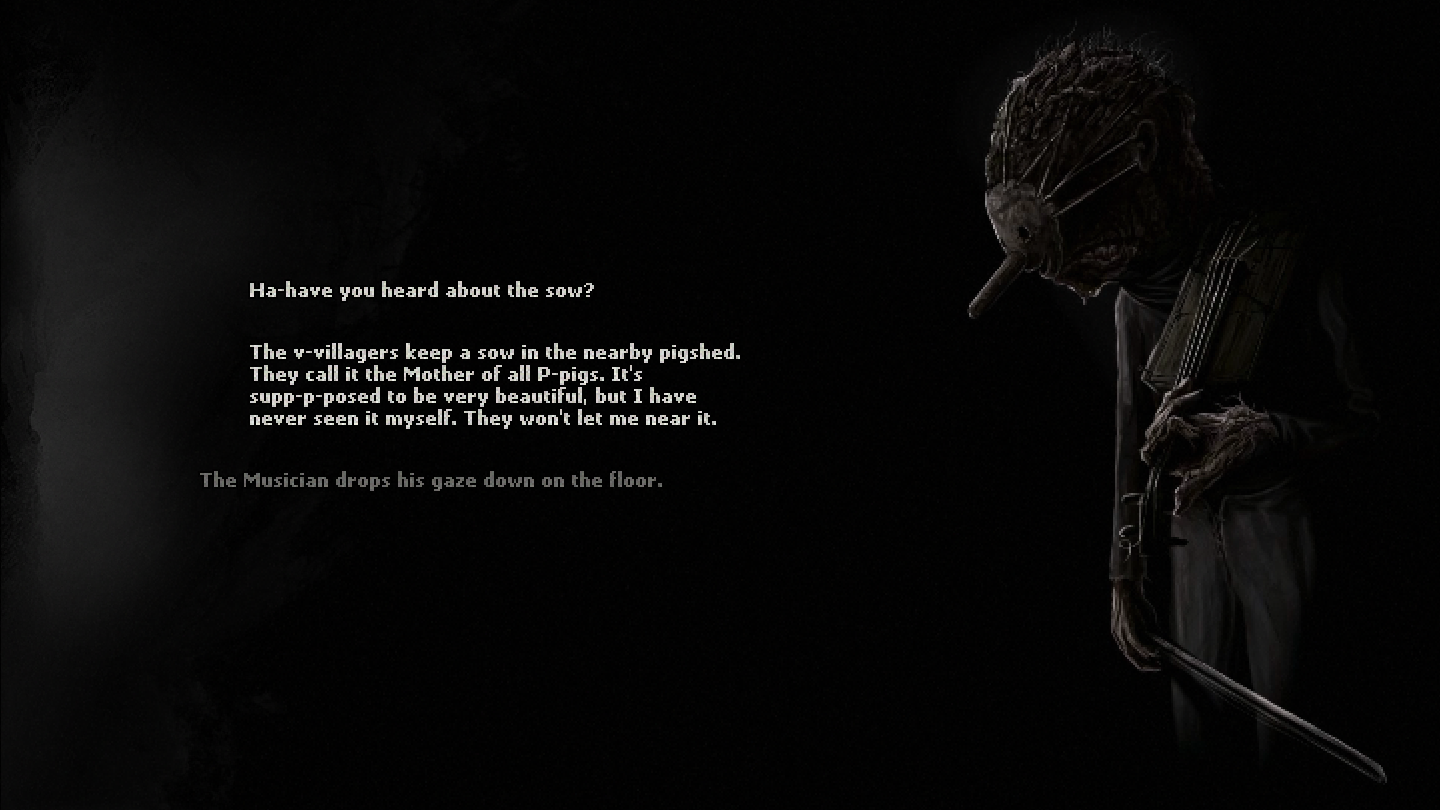 I first heard of Darkwood due to all the positive press it’s been getting. The developers of the indie title, Acid Wizard Studio, have chosen to battle key resellers by uploading their game as a free torrent on Piratebay. Their only request is that those who are considering buying purchase the game from a legitimate site, rather than a key reseller.

“By doing that, you’re just feeding the cancer that is leeching off this industry,” the developers say within the torrent’s description.

Acid Wizard Studio was born from a group of guys that were, by their own admission, “too afraid to play horror games”. Despite that, they still desperately wanted to make one. This bunch of college guys from Poland decided to up-heave their lives, quit their jobs, and start work on Darkwood. To solidify the point, their recent AMA was titled “We’re afraid to play horror games, so we quit our jobs and made one, with no jump scares”.

“Before Darkwood, some of us literally could not sit through some of the classics of the genre,” the developers explained during the AMA, “While developing the game, we managed to slowly overcome our fear of playing horror games or even watching scary movies.”

Instead, the team focused on an atmosphere that’s both intriguing and terrifying. It manages to keep the horror going through the ever-present anticipation and wonder. In Darkwood, you feel a bit like Alice in Wonderland, if Alice tumbled down the rabbit hole and found a world that was actively being eaten by a forest. It feels more Twin Peaks than Saw, assuming Twin Peaks had a wolf-man that called you “comrade”, and a literally lethal nighttime.

While the game took a lot longer to develop than the team anticipated, it was recently released in all of it’s creepy, creepy glory. Acid Wizard Studio had set release for 2014, but it wasn’t until July of this year that the game was finally completed. The wait was worth it.

After hearing of Darkwood’s release, I grabbed it straight away, desperate for a chance to play a horror game that wouldn’t leave me a shivering wreck. I’m still alive, and I can proudly say that I’m writing this article with hands that AREN’T shaking. 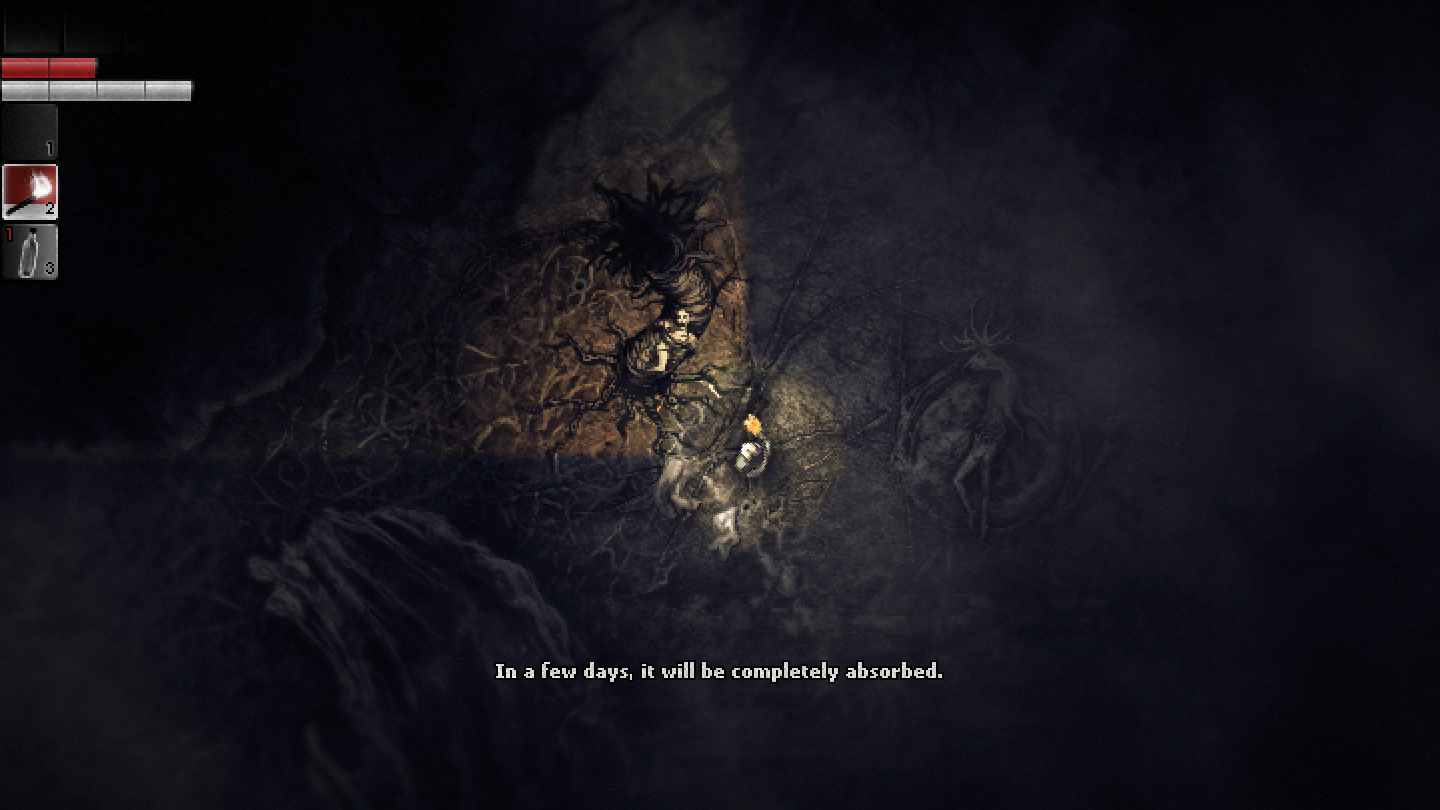 The world of Darkwood is foreign, and the setting is unique. You’re trapped in a place that’s rapidly being consumed by the all-encompassing forest. You’ve found a way in, and now you have to find a way out. The real trouble is surviving until you get there. You stumble through dilapidated houses, searching for remnants of the old world that can help you escape the woods. Half-digested bodies litter the landscape, and the living things that remain alive are …  wrong.

Darkwood is fantastic. Not only do I highly recommend the game to those with PTSD, but I’d urge everybody who is sick of jump scares to play it. It’s a terrifying, subtle indie gem in a world of over-the-top horror titles.

The claim that there are “no jump scares” might be a bit strong, however. There are certainly no intentional jump scares, but you’ll likely run into more than a few startling moments. When you’ve barricaded your home for the night, and a man with a tree for a head comes busting through your fortifications … yeah, you might be jostled.

The game does, however, put the majority of its focus on the burgeoning, oppressive atmosphere, and that makes all the difference. Not once did I have to frantically claw at my volume to prematurely cut off a screaming audio scare. I never had to take a break due to being too afraid to continue. I didn’t even drop my mouse.

Whether or not the developers intended it, Darkwood is the perfect horror game for those who can’t mentally manage other horror titles. Whether you have PTSD, or any of the other stress/anxiety-related disorders that exist, you’ll find fresh air in Darkwood’s approach to fear.

Game studios should take note: THIS is how you make a horror game inclusive.