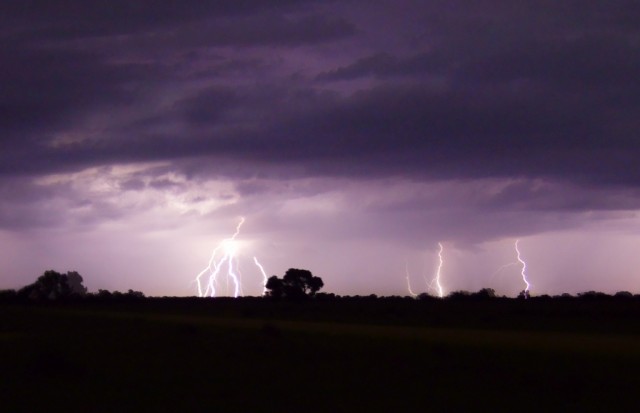 Though it sounds like a necromancer spell in some B-grade RPG, dark lightning is actually a strange, ill-understood weather phenomenon that takes place deep within storm clouds.  While it’s invisible to the naked eye, a group of researchers using some fortuitous satellite data may have discovered that lightning and dark lightning are more closely linked than once suspected.

Marked by a massive burst of radio waves and gamma rays, dark lightning is kind of like lightning’s evil twin. And according to a report this week in the journal Geophysical Research Letters, there may be a lot more of it than we once thought. In fact, the small amount of data available suggests that every lightning strike we see could have a dark side to it as well.

That’s the conclusion reached by team of scientists at the University of Bergen in Norway. After analyzing data from two independent satellites that were monitoring the same storm in 2006, the team suggests that dark lightning — also known as a terrestrial gamma flash — may be released just prior to a strike of bright lightning — or as most of you know it, lightning.

The report shows that just before the visible lightning we’re familiar with, a strong electric field threw electrons into the air at nearly the speed of light. When those highly energetic electrons impacted the molecules in the surrounding atmosphere, the result was the burst of gamma rays that denotes dark lightning, coming just milliseconds before a crack of bright lightning split the sky.

Looking at just one storm, of course, can’t teach us how all lightning works, and the authors stress that their research is in its preliminary stages. With help from an ESA satellite due to be launched in the coming years, though, the researchers hope to get a better handle on just what dark lightning is, what its connection to storms is, and even what health effects it may have on humans.