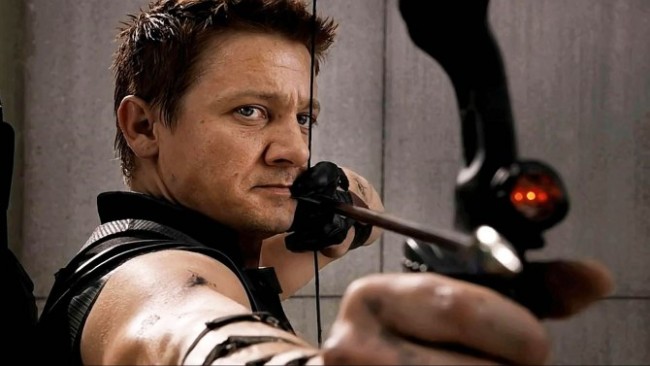 Did you feel disappointed about how little Hawkeye got to do in the first Avengers movie? Jeremy Renner felt that way too, to the point where he didn’t even want to continue with the series at all, and he even asked for his character to get killed off.

In a recent interview with Heroic Hollywood, Renner said that he would jokingly fake a heart attack while in character as Hawkeye for the first Avengers:

I just had a heart attack in every scene – I’d just be walking with… Scarlett Johansson, and just like be ‘Ugh [clutching his chest theatrically].’ And they said, ‘What are you doing, man?’ ‘I’m giving you an option, if you just want to kick me out of this movie. Just you know, at any given moment, if you wanna kill me off, daddy’s gonna be having a heart attack.’

The producers probably took this joke in the spirit with which it was intended, by giving Hawkeye more to do in subsequent movies. After all, as Renner points out, Hawkeye really doesn’t get the chance to show any personality in the first Avengers, for plot reasons:

[I]n the first Avengers…I was just getting to know who Hawkeye was, and then zap, I go round like a zombie, I’m like Loki’s minion, And I’m still not even sure who Hawkeye was at that point. So I’m a little frustrated, because I was so excited to figure out who Hawkeye was.

Although Hawkeye has gotten more to do in subsequent movies, he’s still a far cry from his presence in the original Avengers comic books. When I went back and read those for the first time, I was surprised by Hawkeye’s brash and outgoing personality, as well as how often he belabors whether he’s able to keep up with his super-powered coworkers. Almost none of that personality, nor any of Hawkeye’s latent anxieties, has ended up in the modern-day Avengers movies, and it’s a shame, because it would be a lot easier to relate to Hawkeye as a character if those aspects got fleshed out.

Doesn’t look like Renner’s iteration of Hawkeye is going anywhere, though; he’ll will be appearing in Infinity War along with the rest of the heroes. Are you disappointed with Hawkeye’s portrayal in the movies, compared to the comics? Personally, I’m holding out for Kate Bishop to show up.