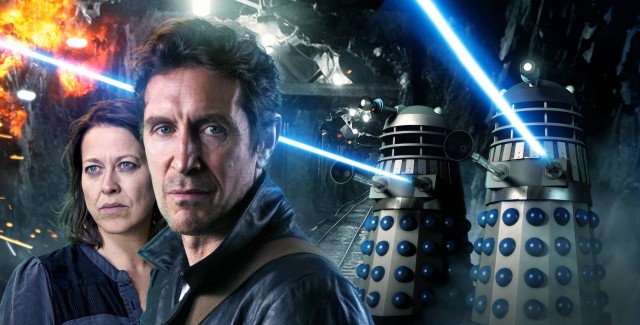 If you’ve ever wondered about the secret origins of the Time War, what could be worse than Daleks, or how the Eighth Doctor got from the movie in 1996 to minisode in 2013 … then you’ll want to listen to Big Finish’s audioplay, “Dark Eyes.” During the Doctor Who dry spell from the Eighth Doctor’s movie, starring Paul McGann, to the Ninth Doctor’s first appearance, Big Finish kept Doctor Who alive with audioplay serials, including new adventures for Paul McGann’s Doctor. As the most recent Doctor, Eight moved the plot of Doctor Who forward up until Russel T. Davies brought the show back to the air with Christopher Eccleston’s Ninth Doctor.

Big Finish is still making audioplays for Doctors going all the way back to Tom Baker as the Fourth Docto, but the Eighth Doctor can no longer claim to be the flagship of the Doctor Who series. Peter Capaldi as the Twelfth Doctor currently has that honor as the star of the television show. That doesn’t mean the Eighth Doctor was forgotten. Far from it. There has been a lot of catching up to do to bring Eight’s story in line with the Time War and the rest of Davies’ vision for New Who. And that means more Big Finish audioplays.

If, like me, you don’t have the patience or spare cash to download Doctor Who audioplays every week, “Dark Eyes” is a perfect introduction to the Eighth Doctor’s story with plenty of hints about Eight’s role in the Time War. (It’s not what you think.) There are currently four “Dark Eyes” titles released, each disk contains three audioplay episodes. (You can also download them from Big Finish online.) I’ve listened to them all multiple times now while driving to and from work. Nothing is better for a commute than space battles, aliens, and the soothing sound of the sonic screw driver. 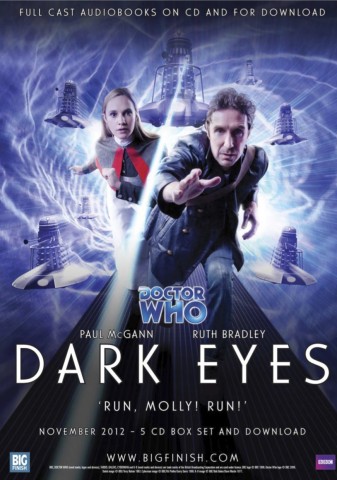 “Dark Eyes” tells the story of the Eighth Doctor, looking for hope after the death of his previous companion, Lucy, only to find that one of his fellow Time Lords has a project for him that lets him “save the girl.” Of course, not all girls need saving. Molly O’Sullivan may be a caught in a struggle between the Time Lord High Council and The Dalek Time Controller (not to mention, later in the series, The Master and a godlike gaseous entity called the Eminence,) but she’s nobody’s pawn. She isn’t very impressed by the Doctor either. In fact, Molly and the Doctor begin their acquaintance not with him saving her, but with her saving him.

Molly is a VAD (Voluntary Aid Detachment) working as a nurse on the battlefields of World War I. When Daleks and the Doctor come and shake up her world, she’s having none of it. Molly, as the prize being fought over by various factions could have easily been reduced to a girl-shaped maguffin, but she never does. It never really becomes two sides fighting over Molly. Instead, it’s Molly and those she chooses to ally with fighting against anyone who might control her. Up until the last disk set, Molly never loses her agency. And when she does, it’s a blow to the whole story.

The Doctor’s other companion on his adventures in “Dark Eyes” is Liv Chenka, a character originally from the Seventh Doctor 2011 audioplay Robophobia. If Molly’s story is about never backing down or letting anyone else choose your fate, then Liv’s story is about making the hard choices and facing the consequences. Liv’s story is told in chronological order, but not in the order the Doctor experiences events, so the listener, along with Liv, gets to know game changing secrets the Doctor can’t hear yet. It’s a very clever play on the idea of time travel that I wish we could see more of.

Liv Chenka is a tough-as-nails Med Tech from the future who we first meet in “Dark Eyes” tending to the sick and overworked on a planet run by the Daleks. The Doctor gives her plenty of reason not to trust him when they meet for the first time in his frame of reference. As two medical professionals, Liv and Molly have plenty to talk about that isn’t the Doctor, the Master or any other man, making “Dark Eyes” one of the few Doctor Who stories to actually pass the Bechdel test. 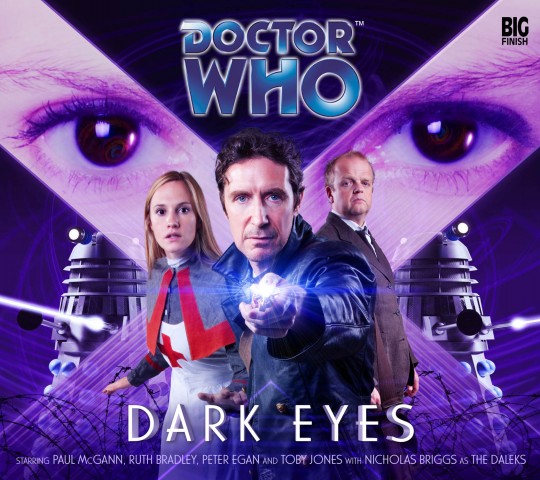 This isn’t a light-hearted Doctor Who story. The Doctor makes hard choices, frequently trying (and sometimes failing) to find the lesser of two evils. His compassion and strength of character are often his fatal flaws. After the events of “Dark Eyes,” the Eighth Doctor’s attitude in The Night of the Doctor makes a lot more sense. After everything he’s been through, romantic notions and opera cloaks both have to go out the window (or the Tardis door.)

That doesn’t mean “Dark Eyes” isn’t fun. Molly’s cutting wit had me laughing out loud and Paul McGann does an amazing job of balancing the deadly serious with the Doctor’s innate ridiculousness. Besides, there are few things more fun (for me anyway) than piecing together the clues in a Doctor Who episode to find out a big secret.

Jessica Sirkin is a speculative fiction writer and technology journalist living in Boston with her pet rabbit, Lenore. Her short story, “The House in Winter” was a runner-up for the “Apex Magazine Best Story of the Year 2014” and was made into a podcast. She spends of her time sitting in front of a computer and should probably get out more. Follow her on twitter @jessicasirkin or find her onLinkedIn.