"I applaud the ladies for giving it a try, but I would suggest they forget going any further." 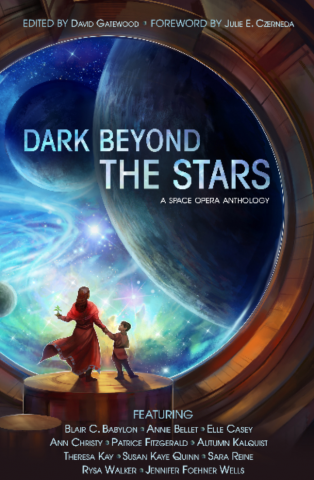 We’ve written a lot recently about the politics of Amazon book reviews.

Reviewers have used Amazon to express their concern over everything from the power dynamics in a romance novel about a Nazi concentration camp commander to “SJW politics” in Star Wars books, and now someone is using it as a platform to share the ol’ fashioned belief that women just don’t write good science fiction. Yawn.

We were recently contacted by some of the women involved in Dark Beyond the Stars, an all-female sci-fi anthology. The anthology has a 66% 5-star rating on Amazon overall, but received this 2-star review last Friday (under the title “Space Opera It Ain’t”):

I’m sorry to offend fifty percent of the population but it has to be said that when it comes to writing Science Fiction, it still remains a purely male domain.

I bought the above book the other day, hoping to be proved wrong. It is a collection of stories under the banner of science fiction by an all female group of writers. They are: Patrice Fitzgerald, Blair C. Babylon, Annie Bellet, Elle Casey, Ann Christy, Autumn Kalquist, Theresa Kay, Susan Kaye Quinn, Sara Reine, Rysa Walker and Jennifer Foehner Wells.

While the stories are expertly edited by David Gatewood, without exception, sadly each one has that special something missing to make them true scifi, let alone memorable. Not one of the eleven writer’s offerings got my undivided attention.

For the publisher to make the claim that the anthology is space opera is laughable! Obviously neither Gatewood or anyone else connected with this collection of stories has a clue about what constitutes a space opera. Think Starship Troopers, District Nine, Farscape, Star Gate, even Star Wars and Star Trek. To borrow a quote – “I associate the idea of space opera with appallingly bad writing,” which is the perfect description of this book’s content.

For any scifi story to be considered to be a space opera, it should always be a mixture of fast paced action combined with a large measure of the shoot-em-up mentality.

I applaud the ladies for giving it a try, but I would suggest they forget going any further. Leave the genre to those of us who know how to write scifi, being well versed in it’s many nuances…

The male author ended the “review” with his name and a mention of one of his own books, and later republished the review on his blog and linked to it on Twitter.

Although you can find the author’s name on Amazon, I’m not publishing it here both because I don’t want to promote his books, and because I think it’s less important to demonize one patronizing, out-of-touch fuddy-duddy than it is to look at the sci-fi and literary culture that allows literary chauvinism like his to continue to thrive.

If you kept up at all with the recent Hugo Awards scandal, this likely won’t be the first time in recent months that you’ve seen a man bemoan the inherent ability of female genre writers.

A few decades ago, if you saw a lovely spaceship on a book cover, with a gorgeous planet in the background, you could be pretty sure you were going to get a rousing space adventure featuring starships and distant, amazing worlds. If you saw a barbarian swinging an axe? You were going to get a rousing fantasy epic with broad-chested heroes who slay monsters, and run off with beautiful women.

[…] Finally, a book with a painting of a person wearing a mechanized suit of armor! Holding a rifle! War story ahoy! Nope, wait. It’s actually about gay and transgender issues.

This emphasis on action in sci-fi (and on action’s supposed masculinity) isn’t just an issue in the literary world, of course; director Colin Trevorrow recently made the well-intentioned but still incorrect statement that female filmmakers are inherently less interested in movies that “involve superheroes or spaceships or dinosaurs” than their male peers are.

All this is to say that this one reviewer isn’t really the problem, nor is he an exception–he’s the product and progenitor of a wider culture of sexism in genre media.

Sentiments like his are so common-place, in fact, that series editor Patrice Fitzgerald anticipated this kind of backlash to Dark Beyond the Stars. She explained to me in an email,

We were dismayed but not surprised to see a review from a fellow science fiction author who objected to women writing in this genre.

It has to be said that we anticipated some sensitivity to this anthology. Not because there is anything particularly radical about the roster. Certainly, no one would blink if a science fiction anthology included only male authors. In fact, it happens frequently, and no one even notices. Here is one example, which includes not simply a collection of stories written by a single gender, but ten entire books. Every single author is male, and I don’t believe there was an outcry about the contents of this box set of novels. Stars & Empire: 10 Galactic Tales

Those authors whose stories appear in DARK BEYOND THE STARS are science fiction writers who happen to be women. The book has done extraordinarily well since its release in August, and naturally, we are thrilled at those results. Perhaps that raises the ire of those who are frustrated in their attempts to sell their own work.

Not surprisingly, He Who Shall Not Be Named is more interested in criticizing women than he is in being criticized by them. Fitzgerald explained to me over email that Amazon took down “all of the eight or nine critical comments which objected to this review (presumably in response to a complaint by the UK author and reviewer Mr. Eason). Since that time, several more comments have been posted, and as far as I can see, only one of those has been removed.”

She also sent me a detailed record of correspondence between The Dark Beyond the Stars team and Amazon, which gives some interesting insight into Amazon’s stance on review politics:

We contacted Amazon to make them aware that the review was in contravention of their guidelines. The reviewer did not simply comment on our abilities as writers, or give his opinion of the anthology. He questioned the ability of all women to write science fiction. That is a clear violation of Amazon guidelines, which read as follows:

We also brought to their attention the fact that the review was written by an author who used Amazon’s review forum to plug his own competing science fiction novel, which they claim is not permitted.

A Dark Beyond the Stars author contacted Amazon to ask them to remove the review, and received this response:

I understand your concerns, but the review doesn’t violate our posted guidelines, so I’m unable to remove it in its current format.

Although it’s irritating that HWSNBN’s egregious mansplaining will remain on Amazon, his review does have the incidental benefit of demonstrating exactly the kind of sexism lady genre authors are up against–if you’re a man who can’t understand why some female writers choose gender neutral or male pseudonyms, allow the Voldemort of book reviews to demonstrate the kind of prejudice they’re trying to avoid.

The review has also helped drum up some publicity and support for Dark Beyond the Stars. Authors Brian K. Lowe and Will Swardstrom have both written pieces condemning male sci-fi gatekeepers and praising the anthology. Swardstrom writes in response to the reviewer “applaud[ing] the ladies for giving it a try,”

Women don’t need your applause, nor do they want it. There are plenty of people out there who appreciate good stories with well-developed characters.

[…] Your review just shows that you are a caveman who looks at the stars and wonders how far you can go when the women in the cave next door have already developed the wheel and fire.

[…] Women can write science fiction. They can write it well, and if you don’t believe me, go pick up your own copy of Dark Beyond The Stars. If short stories aren’t your thing, pick up one of their full length novels. These women can write — and write better than me.

Keep it up. Show the girls out there that men like this have no say in their lives.

Thankfully, Dark Beyond the Stars has every intention of “keeping it up.” According to Fitzgerald,

[REDACTED] and his ilk will be happy to know that I am in the process of finalizing plans for a second BEYOND THE STARS anthology of space opera stories, and we are letting in a few good men this time. The third in the series will probably be an all-female line-up again. Just for fun.